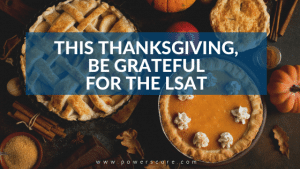 Thanksgiving is upon us! And of course, the most common theme associated with this pie-filled holiday is thankfulness. In a piece he published in the NYTimes, Artur Brooks argues that acting grateful can actually make you grateful. We have long been conditioned to believe that gratitude is not real unless it is sincere, but new research shows that emotional authenticity is somewhat overrated. Apparently, an article in the journal Social Cognitive and Affective Neuroscience identified a variation in a gene (CD38) associated with gratitude, suggesting that we can actively choose to practice … END_OF_DOCUMENT_TOKEN_TO_BE_REPLACED 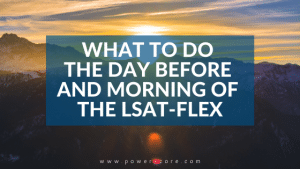 Your LSAT-Flex test is almost here! As you finalize your last-minute preparation for the test, remember that there are things you can do outside of LSAT prep to help ensure your best performance on test day. The Day BeforeRead back through your LSAC email containing information about the ProctorU virtual proctor system and requirements for your device to successfully run the Flex platform. If anything has changed with your internet connection or device since you signed up for your testing time – you can run another system test via ProctorU here. This email will also contain information … END_OF_DOCUMENT_TOKEN_TO_BE_REPLACED 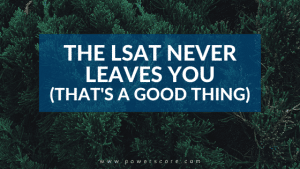 There have been plenty of articles written about LSAT thinking in the real world, and about how LSAT logic is used (and often abused) in everyday life. Those articles are all valid, and interesting, I think! But one thought I want to mention is that the thinking skills you learn while studying for the LSAT will stay with you, and benefit you well into the future. Logical Reasoning in Daily Life While I often think of the value of learning LSAT logic when explaining LSAT questions (or arguing with my sister, who could do with a thorough reading of the Logical Reasoning Bible), what … END_OF_DOCUMENT_TOKEN_TO_BE_REPLACED 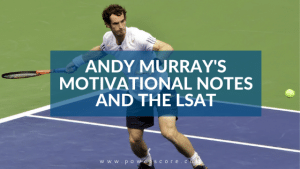 During a tennis match in 2015 at the Rotterdam Open, a journalist snapped a picture of tennis star Andy Murray consulting a handwritten sheet between sets. As it turns out, the sheet contained a list of tactical and mental reminders for Murray during the match. Let's take a look at the list, and then talk a bit about how you can use something similar in your LSAT preparation to your advantage. For starters, here's the tweet from the journalist.https://twitter.com/wilfredgenee/status/567625102880436224In more direct form, the list reads as follows:Be good to yourself Try your … END_OF_DOCUMENT_TOKEN_TO_BE_REPLACED 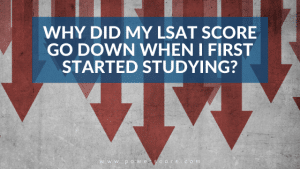 On occasion, I speak with students who experience a score decrease when they first start preparing for the LSAT. Despite putting in a fair number of study hours, they find that initially their score stays the same, or drops a few points. This can be an extremely distressing occurrence (to put it mildly), but it's actually quite normal, and even expected. So let's talk about why it happens, and what to do about it. But... Why? The first question is, why would such a thing occur? When you study a new topic, you learn more about it, and this new knowledge should translate into a better score. … END_OF_DOCUMENT_TOKEN_TO_BE_REPLACED 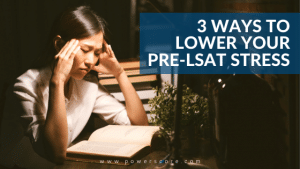 If your LSAT test administration is on the horizon, you're likely focusing on the final countdown to the big day. At this point, you (should) have already invested a significant amount of time and effort into preparation. Maybe you took a course, worked with a tutor, or used our free self-study site. Ideally, you also have a number of practice tests under your belt and an effective and efficient approach to the test. Your opportunity to crush the LSAT is swiftly approaching! With that in mind, here are a few ways to help make the countdown as stress-free as possible. Take it Easy To whatever … END_OF_DOCUMENT_TOKEN_TO_BE_REPLACED 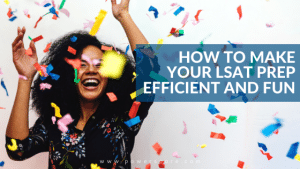 If you're here, it's fair to assume that you're taking your LSAT prep seriously. That's smart! But are you being smart about how you study? Both commitments are important if you want to do well on the LSAT without going mad and burning out before test day. The LSAT Emotional Roller-coaster Most people studying for this test experience a full range of emotions: fear, excitement, loathing, you name it. The excitement you feel when a concept finally clicks or when you raise your score on a PT. These are fantastic motivators that keep you coming back for more. It's a geeky kind of high and part … END_OF_DOCUMENT_TOKEN_TO_BE_REPLACED 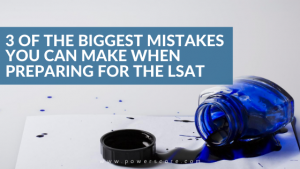 There's a good and not-so-good way to prepare for the LSAT. We see test-takers make mistakes all the time! Let's review three very common errors and how to avoid them. Looking for Shortcuts Performing well on the test requires solid conceptual understanding of the material being tested. Relying on a “quick fix” or a shortcut might help in some instances; however, these are not bullet-proof methods that can be applied universally and work every time. Such “techniques” can do more harm than good. Many students who use them never bother to understand and apply the correct method of … END_OF_DOCUMENT_TOKEN_TO_BE_REPLACED 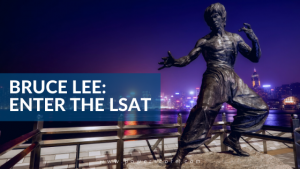 Most people are familiar with Bruce Lee. He was a martial arts master who became an actor, and when he died young at 32, he was already a superstar and cultural icon. But while most people know him for his martial arts movies, few know that he was also a philosopher and avid student of the mind. After his death, thousands of books were found in his house, with over 1500 marked up with detailed notes and comments. Lee wasn't just a heavy reader, he was also the author of  multiple books, including writings on martial arts, poetry, philosophy, science, and positive thinking. Within those texts, … END_OF_DOCUMENT_TOKEN_TO_BE_REPLACED 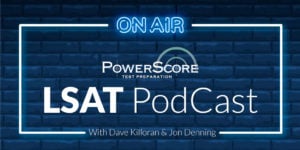 Dave and Jon are here to offer guidance in these uncertain times, talking through the March LSAT cancellation, the (seemingly-inevitable) April cancellation, and administrations in the months that follow. That includes a discussion of a potential May LSAT, as well as the possibility that the exam moves entirely remote and allows you to test from home. There’s also an analysis of how this situation is likely to affect applicants through the remainder of this cycle. … END_OF_DOCUMENT_TOKEN_TO_BE_REPLACED 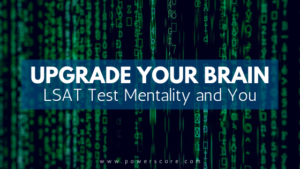 Stressing about the LSAT? Dreading practice tests? Everyone suffers from some degree of test anxiety. It's completely natural and having a healthy recognition of the gravity of the test can be a helpful motivator. But, did you know you have an LSAT prep superpower? Your Hidden Superpower There's an excellent TEDx Talk by Dr. Rock Hanson titled Hardwiring Happiness. Dr. Hanson is a neuroscientist who focuses on issues relating to neuroplasticity. Unfortunately, there's not pseudo-science elixir for instant intelligence and memory boosts. But, you can hack your brain and use the practice of … END_OF_DOCUMENT_TOKEN_TO_BE_REPLACED 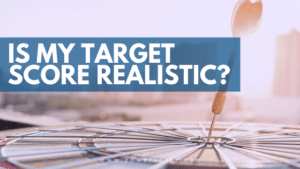 When you decide to take the LSAT and start looking at law schools, you inevitably run into the score requirements for admission. From there, you can develop an idea of what you want, and likely need, to get on the LSAT in order to get into the school of your dreams. After taking a few practice tests, you might start asking yourself the question. Is it possible to get a 165? A 170? A 175? This question makes a regular appearance in our classrooms, in private conversations with tutoring students, and on the LSAT Forum.  So, is it possible? Statistically, Speaking When looking at statistics, … END_OF_DOCUMENT_TOKEN_TO_BE_REPLACED 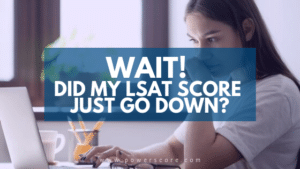 Practice tests should be a part of your study routine, you may even have a few of them under your belt. If you haven't incorporated PTs, start including them! But, let's assume you've taken several by now, all under test-day conditions. You probably know how imperative it is to take and review them correctly. If not, you can find more information on how to do that on this blog post. Obviously, not all of your PTs will go well and it is important to understand why.While getting an awesome score on your practice test can give you an important confidence boost, it has little pedagogical … END_OF_DOCUMENT_TOKEN_TO_BE_REPLACED 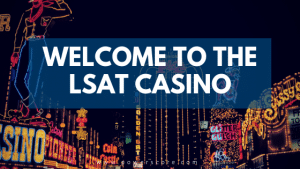 When talking about the LSAT, and particularly when examining test results, I like to analogize the LSAT to a casino. Yes, there is the chance that you can go into the test and lose your shirt score-wise. However, what I'm really referring to is the somewhat random nature of the questions you encounter on the LSAT and how that can dramatically affect test takers. The Test is a Gamble The LSAT is a standardized test. While that means certain elements are consistently tested, norming protocols are used, and the test is administered in a similar way each time, the exact content of the LSAT … END_OF_DOCUMENT_TOKEN_TO_BE_REPLACED

Happy New Year! What are your goals for this year?