You are here: Home / Studying / Andy Murray’s Motivational Notes and the LSAT 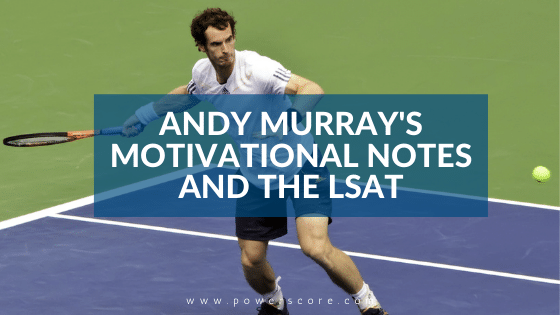 During a tennis match in 2015 at the Rotterdam Open, a journalist snapped a picture of tennis star Andy Murray consulting a handwritten sheet between sets. As it turns out, the sheet contained a list of tactical and mental reminders for Murray during the match. Let’s take a look at the list, and then talk a bit about how you can use something similar in your LSAT preparation to your advantage. For starters, here’s the tweet from the journalist.

In more direct form, the list reads as follows:

His list re-numbers back to 1 after the first five items, but I’m not sure why (I’ll be sure to ask him about it the next time I see him). Above, I’ve numbered the list from 1-10 for the sake of convenience.

While I’m not the biggest tennis fan, the appearance of this list caught my interest. Here we have a prime example of a professional athlete revealing that they need help during a match to keep focused and on-point. And it’s not like Andy Murray is some low-ranked or second-rate player: he’s the 2013 and 2016 Wimbledon Champion, the 2012 US Open champion, a 2012 and 2016 Olympic Gold Medalist, and 8-time runner-up in Grand Slams such as the Australian Open and French Open. He’s undeniably a world-class player and one of the best around these days, and yet he’s still using this type of tool. That said, what can LSAT takers learn from this list?

Let’s focus on the mere fact that such a list even exists. It tells you that even the best players need reminders, and that should be a comforting fact. In the LSAT world, everyone who takes the test loses focus sometimes, and it’s good to know that even the very best sometimes need a helpful reminder along the way. If you find yourself zoning out for a moment during the test, don’t be alarmed or overly concerned. Just take a moment, re-focus, and move on. It’s not a big deal, there’s no need to panic, and it happens to everyone!

Let’s look at what he’s reminding himself of: some of the items are very general (like #1: Be good to yourself), some are about being aggressive (#6: Try to be the one dictating), and some are very specific in a tactical sense (#9: Stick to the baseline as much as possible). He’s focusing on all sorts of angles within the list because a total approach requires shaping on all fronts. There’s more to a winning approach than just one element, and his list reflects that.

None of the reminders contain any negativity. There’s no comment about what to do if he’s losing, or if his body hurts. Instead, he uses all positive messaging in an attempt to overcome any possible negatives. Of course he’s going to get tired or fall behind at times; but his approach isn’t to start the match thinking about those things. Instead, he focuses on the positives, knowing that he can use them during the tough times to keep a level head and to keep his spirits up.

One fascinating element to me is that this list was hand-printed on the reverse side of a sheet of paper that also contained a printout of a message of support he received from his followers.

Thanks for the letter guys and girls… pic.twitter.com/H7i9XKpphL

It wasn’t just that he had the handwritten list to consult, on the other side he had a message of positive reinforcement from his fans! This is a form of classic values affirmation (see our Free Test Mentality seminar), and it helps keep him in a positive frame of mind during the match. He’s doing everything possible to stamp out negativity—both generally and specifically. During the LSAT preparation process, it’s easy to fall into the pit of negativity out there. Self-doubt, opinions from friends, even random comments from strangers on a forum can all cast a negative pall over your studies (and imagine how much tougher it is for someone like Murray, who can read lengthy criticisms about himself in any newspaper or online sports site). Those negatives can be hard to avoid, but you have to do your best to cast them aside and focus on the positives.

The most useful takeaway for test takers is that you should consider creating a similar list for your LSAT preparation. You can create a list that has a set of reminders—both general and specific—and then glance at it daily as you study, and then before the LSAT. It will help you focus, and remind you that everyone needs mental sharpening as they prepare for and take the LSAT. While each person’s list would be slightly different, here’s an example of one list, based on some of the ideas used by Andy Murray.

Experiment with creating your own list, and refine it as your prepare for the test over time. You’ll find it is a helpful reminder of what you need to focus on, and it’s also a good way to get into the right mindset as you begin each study session.