You are here: Home / Studying / Bruce Lee: Enter the LSAT 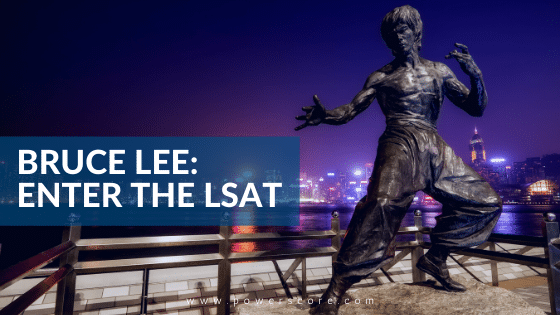 Most people are familiar with Bruce Lee. He was a martial arts master who became an actor, and when he died young at 32, he was already a superstar and cultural icon. But while most people know him for his martial arts movies, few know that he was also a philosopher and avid student of the mind. After his death, thousands of books were found in his house, with over 1500 marked up with detailed notes and comments. Lee wasn’t just a heavy reader, he was also the author of  multiple books, including writings on martial arts, poetry, philosophy, science, and positive thinking. Within those texts, he made many comments that we can apply to the LSAT. Let’s take a look at a few of the most relevant ones:

The Power of Positive Thinking

“As you think, so shall you become.” I often talk about the power of positive thinking, and every test administration I see examples of where negative thinking dooms someone and positive thinking pulls another person through. When you look at the LSAT, view it as a fun challenge. When you think about yourself in relation to the test, view yourself as strong, confident, and powerful. If you find yourself falling into bad habits and thinking negatively, stop immediately and work to correct that. Letting the negativity linger is the single worst thing you can do.

“Choose the positive. You have choice, you are master of your attitude, choose the positive, the constructive. Optimism is a faith that leads to success.” Yes, Bruce Lee knows what I’m talking about!

“I fear not the man who has practiced 10,000 kicks once, but I fear the man who has practiced one kick 10,000 times.” This is easily Lee’s most famous quote, and to me it says that mere practice isn’t sufficient; instead you have to have mastery. Many LSAT students want to keep doing question after question, but the key is to wring as much information out of each question as possible. Kick each question 10,000 times, so to speak, instead of kicking 10,000 questions once.

“It’s not the daily increase but daily decrease. Hack away at the unessential.” This may be my favorite quote in this group. Gurus often talk about doing more with your time and fitting more into your life, but this goes in reverse to some extent (although he clearly means this in a “less is more” kind of way). With LSAT preparation, it’s very easy to get caught up in all sorts of peripheral issues, but what it comes down to is learning how the test makers think and how to analyze what they’ve said through that filter. Try not to get distracted with all of the talk about the test, or worries about your performance—focus instead on making your approach to each question as clean and as fluid as possible. Learn what’s essential and what’s not, and then move confidently though each question.

The Characteristics of Success

“Notice that the stiffest tree is most easily cracked, while the bamboo or willow survives by bending with the wind.” Taking the LSAT requires flexibility. There’s a myriad of things that can go wrong, and you as a test taker must remain calm and be willing to roll with the punches. This advice also translates into your test taking approach. You can’t be overly rigid, and you can’t force in ideas where they don’t belong.  For example, some students learn conditional reasoning, and then they want to apply it to every question. That kind of rigidity won’t work on a test with this much variation. Be flexible in your approach, and your chances of success rise.

“‎The successful warrior is the average man, with laser-like focus.” I really like this quote, too, because it speaks to the fact that to be great you don’t need some special quality or unusual intellect; what you need is perseverance and focus. You have to want it more and you have to outwork the people around you.

“Life’s battles don’t always go to the stronger or faster man. But sooner or later the man who wins, is the man who thinks he can.” I’m going to close by citing a quote that actually echoes the very first set of quotes in this article. Believe in yourself and you can win the race.

As John Little, author of The Warrior Within: The Philosophies of Bruce Lee noted, “Everything that Bruce Lee did flowed from his mind and his thinking.” Taking the LSAT is all about mental control, and a critical part of your preparation is considering your mental approach. It’s just as important as the techniques you learn and the methods you know.

If you didn’t catch it, the title of this article is a nod to Lee’s most famous movie, Enter the Dragon.