You are here: Home / Studying / Sunk Costs and the LSAT 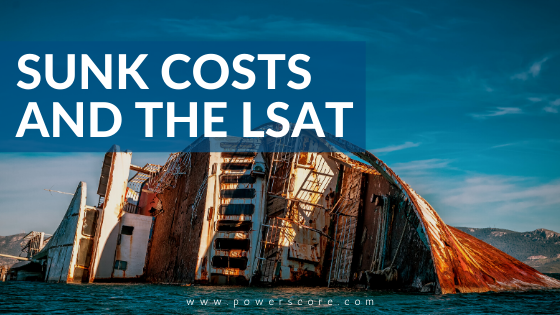 I was an Economics major in college, and one of the concepts we discussed was “sunk costs.” In Econ terms, a sunk cost is one that has already been expended and which cannot be recovered. The thinking goes that since you’ve spent it and you aren’t getting it back, you shouldn’t figure those costs into any decisions you make going forward. Examples of sunk costs include things like advertising, the use of consultants, product research, and staff training.

If, for example, you spent $100,000 on product research for a new widget but the widget wasn’t selling, then you should ignore that $100,000 in making future decisions. It’s a sunk cost and won’t impact the future sales (or lack thereof) of the product. The “Sunk Cost Fallacy” (sometimes called the Concorde Fallacy) is one where further investment is deemed necessary because otherwise the money already spent will be lost, but thinking in this manner ignores the fact that additional investment can accrue more losses (meaning, be careful about throwing good money after bad).

So, why the Econ lesson here in an LSAT blog? Because some of the things we frequently hear from LSAT prep students are based on a sunk cost fallacy. I’ve always found it a useful discussion because it can help inform the choices you make, or plan to make.

One situation where I see this fallacy is with students who have been preparing for a while using one LSAT study system. For example, they bought a Barron’s book at a local bookstore), but they haven’t been satisfied. They are now considering taking up a different study approach. If you’ve committed time to learning a system but it’s not working, it can be a bit scary to contemplate switching to a new system. There will no doubt be some adjustments, and that’s the point where students often fall into the Sunk Costs trap. It’s easy to understand why someone would think, “But I’ve spent a lot of time learning this already,” or “all that time and studying will have been wasted!” But, that’s not true.

First, some of what you’ve learned will apply, and most importantly you’ve learned what doesn’t work for you. That information is actually incredibly valuable, and often underrated. Auguste Rodin once said, “Nothing is a waste of time if you use the experience wisely.” Most people have a good barometer of when things aren’t going well. But it can be very difficult to actually act on that information because of sunk cost thinking. If you know you are using a system that is ill-conceived or not well-suited for you, you now have a powerful piece of information that gives you a reason to act and seek better options. Remember, while it may take some time to unlearn bad habits you’ve picked up elsewhere, you’ll save a massive amount of time going forward if you start learning a system that is more organized and intuitive.

A common variation on the above situation comes from inquiring course students. There’s a fair-sized subset of frustrated students that come to us after working with another company. They talk to us and like what they hear and really want to take one of our courses, but it turns out they already took a different course and are focused on that prior investment. “I wish I’d found you sooner,” used to be one of the things we heard frequently; less so now, which is great. Since they previously paid for a course, they are hesitant to take another one. This hesitation typically stems from not wanting to feel like they wasted their money on the other course.

This is an entirely reasonable manner of thinking, but they just fell for the Sunk Cost Fallacy! Just because you’ve spent $1300 on, say, a Kaplan course, doesn’t mean you should finish it if you don’t feel it is helping you. Why? Because your time has value. You could put that time to better use and get a better return from your time and efforts. Just because you could have spent your time and money better in the past doesn’t mean future, alternative investments will also disappoint.

By the way, one important consideration in the above process is to know how your learning curve works. Working with any advanced thinking system or course takes time. Just because you don’t see results immediately isn’t proof that the system doesn’t work. Give it some time, but if after a few months you are still having the same problems, talk it over with someone! That might be on an LSAT Forum or simply by giving us a call. Help is available, and you have the power to take control of the path you follow moving forward, regardless of any past costs.