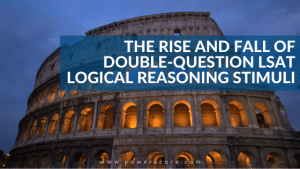 I've talked before (notably here and here) about how the content of LSATs changes from test to test. But, there are even changes in the type of question forms you see. For example, in the early 1990s, Justify the Conclusion questions were rather rare, whereas in the 2000s they appeared relatively frequently. In Logic Games, Rule Substitution questions did not start appearing until June 2009. In Logical Reasoning, one question format that used to … END_OF_DOCUMENT_TOKEN_TO_BE_REPLACED

Follow Us!
This error message is only visible to WordPress admins
Error: No posts found.