You are here: Home / LSAT Prep / The LSAT-India is Growing! 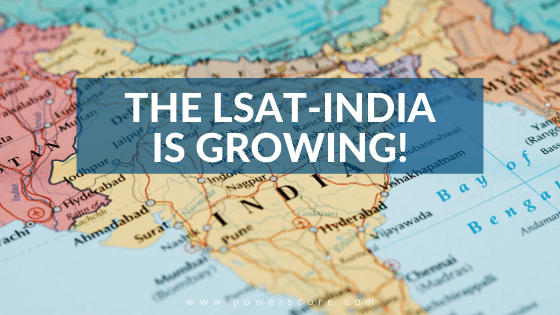 LSAC created the LSAT-India specifically for use by law schools in India and it’s available in 15 different cities. As discussed previously, the test is strikingly similar to the American version with regard to content. Each test has four scored sections, including one Logic Games section, one Reading Comprehension section, and two Logical Reasoning sections.

The LSAT-India has begun to take hold among Indian law schools. In it’s first year, 65 law schools in India used the LSAT-India for admissions purposes. The number of test takers was around 4,000! This may be a small total in comparison to the number of LSAT takers in the US and Canada (over 100,000 test takers annually), but it is a promising start for a new standardized test.

A free practice LSAT can be accessed here, along with more information and resources from the test makers on how to prepare for this specific iteration of the LSAT.

There are some interesting distinctions between the LSAT-India and the American version. Test takers in India don’t have to sit through an experimental section or complete a writing sample. Interestingly, select sections of two of the tests provided (PrepTest No. 1 and PrepTest No. 2) include only four answer choices with each question. Even with a few differences between the LSAT-India and the American version of the test, the free LSAT-India test could provide a good bit of additional LSAT practice for any LSAT taker.

Have questions about the LSAT-India? Please post them in the comments section!