You are here: Home / Logical Reasoning / How to Attack Flaw in the Reasoning Questions on the LSAT 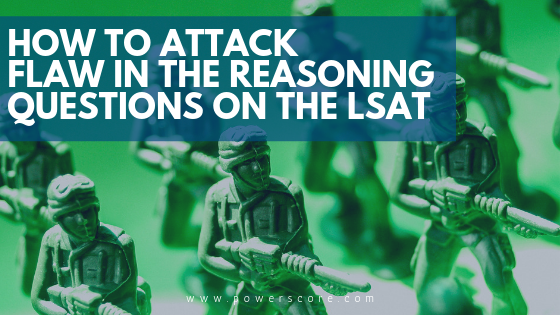 Flaw in the Reasoning questions require you to identify the underlying logical flaw in the argument. Over time, Flaw questions have become among the most common question types on the Logical Reasoning section of the LSAT. In fact, they account for approximately 15% of all questions and 30% of all First Family questions. Your next test will likely contain as many Flaw questions as all Main Point, Method, Parallel, Parallel Flaw, and Cannot Be True questions combined.

In many ways, Flaw in the Reasoning questions are just like Method of Reasoning questions. They both represent an attempt to measure your understanding of abstract argument structure and contain answer choices that can be proven or disproven by directly referring to the content in the stimulus. In Flaw questions, however, the question stem indicates that the argument contains flawed reasoning. Since the test makers freely provide this fact, it is essential that you capitalize on this information!  Identify the error of reasoning in the stimulus before proceeding to the answer choices. While this list isn’t comprehensive, it represents many of the most common reasoning errors you’ll run into on the LSAT.

Test-takers often get “stuck” on Flaw questions. This is usually due to one of two reasons. Either you fail to understand the flaw and prephrase improperly or your prephrase did not match any answer choices. The latter problem is easier to fix. This usually shows that you have a good grasp of logical fallacies! But, it’s also clear you didn’t take the time to fully examine the variety of ways they can appear on the test. Alternatively, you may be getting too “boxed in” your prephrase, preventing you from recognizing the correct answer choice even though you know what you are looking for in general.

On a rare occasion, however, you may have no idea what the flaw in the argument is. If this happens, it’s time for Plan B. If you can understand how to weaken the argument, then fundamentally you have some grasp of the flaw in it. Then you can use that information to help you determine the correct answer choice. If you know a weakness in an argument, you are capable of seeing a concrete way to attack the argument. This reveals, to some extent, the abstract nature of the flaw that is present.

This works because arguments frequently fail to take into account any number of different possibilities, most of which are entirely irrelevant to the logical validity of the conclusion. A discrete number of possibilities, however, are relevant and should have been taken into account. Why? Because, if true, they could potentially weaken the argument. The author should only consider possibilities that could potentially weaken the argument and whose omissions amounts to a logical flaw!

Take This for Example

If you can say to yourself, “this would weaken the argument,” or “this is what I would say to attack the author,” you already know an avenue that would hurt the argument. Use that to help understand the flaw. To see how this works, let’s take a look at the following example.

Let’s say you cannot prephrase an abstract way to formulate the answer to a Flaw question. You can still look at the five answer choices and ask yourself, “Would I say this to attack the author’s conclusion?”

Incorrect. This is because the author never suggested that proper diagnosis and treatment of deficiencies in interpersonal intelligence would be  sufficient to eliminate them.

Correct. If correctly diagnosing and treating one type of deficiency could increase the risk of another type of deficiency, and verbal-linguistic or logical-mathematical intelligence are just as valuable as interpersonal intelligence, then the cost of treatment might outweigh its benefits. Even you did not realize that the failure to make a proper cost/benefit analysis would be a problem, you can still see that answer choice (B) raises a possibility that, if considered, would be damaging to the conclusion of the argument.

Incorrect. Even if not all deficiencies can be successfully treated at an early age, perhaps some deficiencies can be. Furthermore, the author never promised that treating deficiencies in interpersonal intelligence would always be successful. The conclusion is essentially a recommendation to diagnose and treat, not a promise that a given course of action will always yield positive results.

Although this option may be attractive, it’s because appealing to someone’s authority would classify as a flaw in the reasoning. Note, however, that this would only be a problem if the author assumed that the expertise or authority appealed to is valid and reliable. In this case, the author was careful to qualify her conclusion: “if these experts are correct.” The author did not assume that they are correct.

Incorrect. This is the opposite answer. The possibility that the benefits of the proposed course of action might outweigh its costs would strengthen the argument, not weaken it. If you think about it, answer choice (E) describes an assumption upon which the argument depends. It would have been the correct answer choice if the question stem had been worded in the following way: