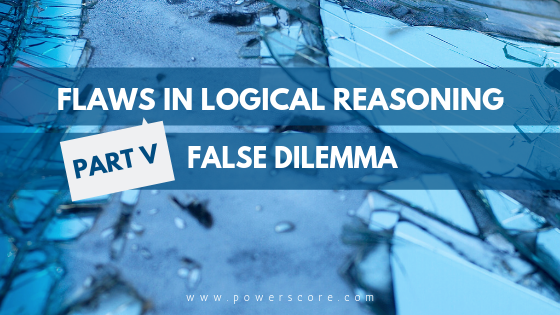 Part Five of our series examining common flaws in LR questions is here! But, before we continue, here’s a recap of our mission as stated in the first post on Source Arguments.

Now, are you ready to hash out the next flaw?

A False Dilemma argument assumes that there are only two possible courses of action, when there may be others. In fact, we can consider the name itself as we explore the nature of this error. “False” obviously implies the inherent mistake in the reasoning given. “Dilemma” arises from the idea of a choice between only two options. Typically this manifests itself as the author eliminating one of the possible courses of action, and thereby concluding that the other course becomes a certainty, despite the fact that more choices/options could be available. Let’s consider an example of how a False Dilemma argument could be made.

“Recent polling indicates that no voters in the county are strongly in favor of the proposed amendment. Therefore, we can expect strong opposition to the amendment when it is voted on next month.”

Here we have evidence that no one finds the amendment to be extremely compelling. But, does that necessarily mean that those same people are therefore strongly against it? Definitely not! It is entirely possible that some voters could be neutral toward or mildly in favor of the proposal.

Here’s how that particular error would likely be represented in an answer choice.

On test day, keep an eye out for any argument that has a binary (two-option) feel to it. Consider whether other, alternative courses of action could potentially exist. If more than two possibilities exist, then the author has presented a False Dilemma. This allows you to quickly scan the answer choices for the one that reflects that mistake.

Do not confuse a False Dilemma with a situation where the author legitimately establishes that only two possibilities exist! Phrases such as “Either A or B will occur, but not both,” imply a limited set of options/possibilities, and certain real-world scenarios inherently yield only two possibilities, like “you are either dead or alive,” or “you are either in the United States or you are not.” In these cases it is reasonable to conclude one thing when the other has been ruled out.

A final point about arguments of this type, and one that I have stressed previously: this is a very specific type of mistake and follows from a very consistent construction, so unless you see an argument where only two choices are presumed to be possible despite more existing, do NOT pick an answer like the one above. While this type of answer isn’t as commonly given as a trap as some of the other types we’ve seen, it does come up incorrectly at times as the test makers try to trick you. So be wary when you inevitably encounter them.