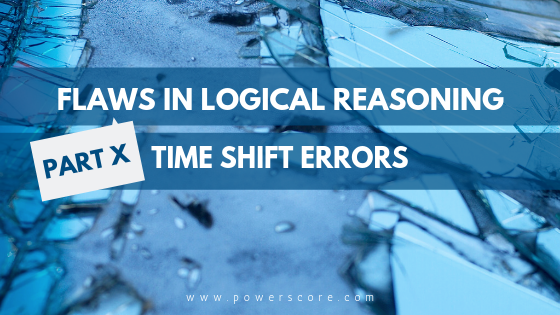 As we finish up this series on common flaws in logical reasoning, here’s a reminder of where we started.

Now for the finale! Another interesting, and hopefully recognizable, mistake that LSAT test makers make with considerable frequency.

This flaw occurs when an author assumes that conditions or circumstances will remain constant over time. So, that what was true in the past is presumed to also apply to the present or future. I say this is a “recognizable” mistake because it always involves a comparison or relationship being drawn between past events with current or future events. Oftentimes, these Time Shift Error mistakes involve vast stretches of time. As I often explain to students, “the key assumption in using the past to make predictions is constancy. Circumstances must be the same if we want to expect similar, or predictable, results”. Let’s take a look at two examples of increasing difficulty.

This is a classic case of presuming that what has been the case so far (no respiratory impairment) will continue to be the case moving forward. Therefore, there is no need to continue to test for it. But, there is no way to know with certainty what might happen in the future. Admittedly this example is pretty straightforward, so let’s examine a more complex version of this error.

“Recent studies of the Southern Greenland Field Mouse have shown that its diet consists exclusively of a local shrub known as ‘flat bush’. The fossil record tells us that this species of mouse inhabited this area as far back as 8,000 years ago. Because of this, we have a very good idea of at least one type of vegetation that was also present during that time.”

Consider the assumption in the above argument. Just because this species of mouse only eats one type of plant today, when it lived here 8,000 years ago its diet was the same (that same “vegetation” was present). Does that have to be true? Of course not. It’s entirely possible the mouse’s diet has changed over such a large stretch of time. So, it’s a flaw to conclude that current events are representative of events in the distant past.

So be sure to keep an eye out for arguments where a shift in time has occurred, particularly if the time span is hundreds or even thousands of years, and see if the author is attempting to draw conclusions by assuming that conditions are the same despite their temporal separation. It should be fairly obvious when this occurs, and you can then quickly scan the answer choices to find the one representing this mistake.