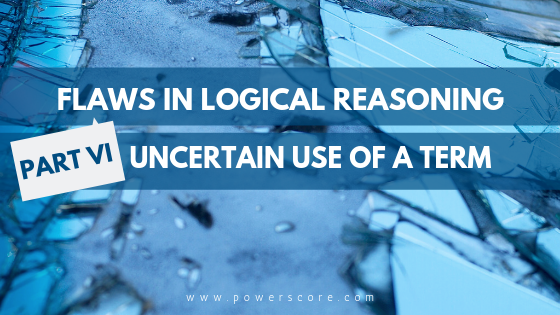 Welcome back to our series on some of the common flaws you’ll find in LR questions on the LSAT! We’re already half way through and heading on to Part 6! Let’s remember our roots with how I began the first post on Source Arguments in this series:

This one seems to confound a number of students on the actual test, so let’s dive in.

Uncertain Use of a Term or Concept

This mistake violates an argumentative principle to which authors must adhere. As an argument progresses, an author must discuss each term and concept in a consistent and coherent fashion. If an author uses some term or discusses some concept in different ways while making the argument, then the argument itself becomes inherently confusing and its integrity is fundamentally undermined.

This can be a confusing notion to grasp in the abstract, here’s an example of how this error might appear.

Board Member: “We need to fully exploit our available resources if this company is going to maximize profits in the coming year.”

Human Resources Director: “Not so fast. Our employees are one of our most valued resources, and we have a strict policy against exploiting our workers.”

Think about what’s wrong with the HR Director’s response. It’s certainly true that employees are a resource and policies protect them from exploitation. However, is that the same use of the word “exploit” that the Board Member intends? No, of course not. The Board Member means “capitalize on available opportunities to maximize profits.” Whereas the HR Director interprets (incorrectly) “exploit” to mean “take advantage of in a malicious or harmful way.” Hence, her response fails to address the argument made by the Board Member and is flawed as a result.

How You’ll See it on the LSAT

Here’s how this type of error would likely be represented in an answer choice:

So on test day be sure to keep an eye out for any argument that uses a word or idea more than once and in an inconsistent fashion. Any time an author relies on a shifting or misconstrued meaning, then the argument contains an Uncertain Use flaw and you can quickly search for an answer choice like those presented above.

A final point about this error. Because most test takers don’t really understand how this particular mistake works, answer choices like the ones above are very commonly presented as traps following stimuli with other reasoning errors. That is, you’ll see “uncertain use” or “equivocation” described as the flaw much more often than you’ll see this type of mistake actually appear in the stimulus. People pick this answer choice because they don’t truly know what it means, but don’t fall victim to that trap! Only if you see the specific type of error discussed above should you choose an answer choice that suggests uncertain usage.