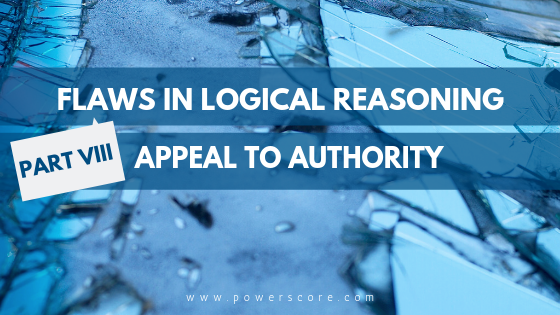 Before continuing on to Part Eight of our flaws in LR on the LSAT, let’s review once more. Here’s how I began the first post in this series, where we looked at Source Arguments:

This next mistake LSAT authors make has some real-world applicability, as well.

I suppose this could just as easily be titled, “Appeal to Improper Authority”. This error occurs when an argument is based on evidence provided by someone who could be considered a person of authority/expertise on a subject, or in a field, but is not necessarily related to the subject in the conclusion. To put it differently, just because someone is an expert regarding one topic, does not necessarily qualify that person to speak with authority on other topics. Here’s an example.

“World-renowned physicist Dr. Patricia Mitchell assures me that exposure to natural sunlight, even exposure resulting in mild sunburn, is still significantly less of a cancer risk than brief exposure to the artificial light in a tanning bed. So I make sure to tell all of my friends that if they’re looking to get a tan this summer they should do it outdoors, and not at the tanning salon!”

Granted, we could probably point out a number of errors here. Perhaps the most glaring is that the author concludes that tanning outdoors is preferable to tanning in a salon based on the opinion of a physicist. There is no reason to believe a physicist would have compelling or relevant insights into biological processes like cancer development. If she was a dermatologist or a general practice doctor, her expertise would be more applicable and persuasive. But, you cannot presume a physicist to be an authority in a field far removed from her area of achievement.

How to Spot it on the LSAT

Two final points to consider regarding Appeal to Authority errors:

Look out for any argument that draws a conclusion based on the opinions of an authoritative source or so-called “expert.” Just because someone is a reliable authority in one field doesn’t mean that expertise will be relevant to other fields.