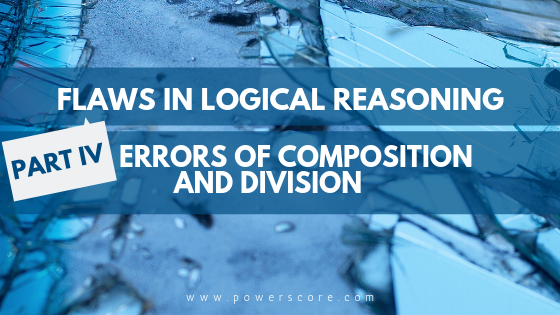 Let’s recap the purpose pf this series before we tackle Part Four. Why is it so important to understand these argumentative errors? Here’s how we started the series when looking at Source Arguments:

Considering the vast majority of LSAT Logical Reasoning questions will have an argument in their stimulus, and the vast majority of those arguments will contain some sort of flawed reasoning, I thought I would take a moment to address a variety of the flaws that tend to appear with some frequency. In a series of posts I’ll examine a number of common mistakes that authors on the test make, which should prove useful for both Flaw in the Reasoning questions (a type that accounts for about 15% of all LR questions), as well as other question types that require you to respond to argumentation.

Errors of Composition and Division.

These are two very closely related errors that involve questionable judgments relating an entire group to parts of the group. Taken together, you can consider these flaws a violation of this basic rule. “Characteristics of an entire group are not necessarily applicable to all members of the group. And, individual members of a group are not necessarily representative of the group as a whole.” However, since “Composition” and “Division” represent two separate mistakes, let’s examine them individually.

An error of Composition occurs when an author attributes some characteristic of members within a group to the whole group or to each member of the group. Quite simply that which a group is composed of may not represent the group itself. Consider an example:

“Gas prices have been rising steadily these past few years. Thus, the cost of car ownership is higher than it was previously.”

Consider whether that conclusion is truly proven by the premise that gas prices have gone up. Of course not. There are many factors that contribute to the overall cost of car ownership. One of those is indeed gas prices, but with electric cars becoming popular, gas may not factor in at all. You cannot assume that knowing something about a component within a group means that same information will apply to the whole group or even to the entire entity being considered.

On the LSAT this type of error would be represented in the answer choices as:

An error of Division commits a similar mistake, but in the opposite direction. An author believes that some truth about an entire group must also be true about each member of the group. When a group is divided, you cannot reliably presume that facts about an entire group will still apply. Let’s see how this might appear.

“The United States is the wealthiest nation in the world. So every American is wealthy.”

Again, it should be clear that the conclusion is not necessarily true! While we can make the claim that America is a wealthy nation, we cannot assume that every American is wealthy. That would be a mistake.

The test makers will describe this flaw as follows:

Granted, those examples are likely more simplistic than the ones you will encounter on the LSAT, but they do illustrate the underlying idea in each error and that’s what is fundamental to your ability to succeed when things get trickier. And the good news is that, just as the error is hopefully easy to recognize above, so too will it be easy to see on test day.

A final point about arguments of this type, and one that I have stressed previously: this is a very specific type of mistake and follows from a very consistent construction, so unless you see a presumed relationship between a group/whole to pieces of that group/whole, do NOT pick an answer like those above. While this type of answer isn’t as commonly given as a trap as some of the other types we’ve seen, it does come up incorrectly at times as the test makers try to trick you. So be wary when you inevitably encounter them.