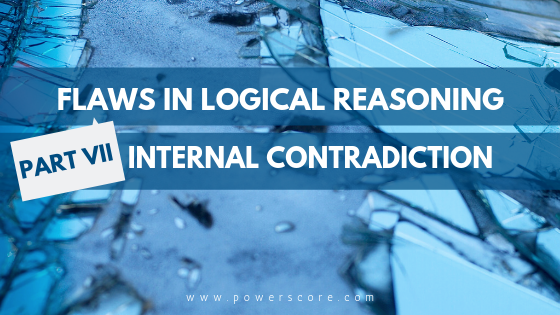 Part 7 is here! But before we get going on the topic of internal contradiction, let’s start with a review the importance of this series Take a look at how I began the first post, where we looked at Source Arguments.

Now, how about we move onto another mistake LSAT authors make, one I feel is among the easiest to spot on the test.

This mistake is also sometimes called a “self-contradiction.” It occurs when an author’s conclusion is actually opposite the conclusion that is best supported by the given premises. In other words, an author will provide evidence that contradicts the very conclusion he or she then draws. Like many errors we have reviewed, this can be a confusing notion to grasp in the abstract. So, let’s look at an example of how this specific error might appear.

Mayor: During my previous term, my staff and I spent a great deal of time focusing on our city’s economy. As a result, unemployment reached an all-time high. Clearly you should support my re-election campaign if you are among those still looking for a job.

Attentive reading should make the mistake in the mayor’s argument immediately apparent. If unemployment during his last term reached an all-time high, then a greater percentage of citizens are without jobs. Hence, it is completely illogical to conclude that the unemployed would desire his re-election for economic reasons. The evidence here is in direct opposition to the mayor’s conclusion, and thus an Internal Contradiction error has been committed.

Here’s how Internal Contradiction would likely be represented in an answer choice.

A few final points to make about Internal Contradiction errors:

On test day, keep an eye out for any argument that’s conclusion depends on conflicting or contradicting information. Only then do you have an Internal Contradiction flaw and you can quickly search for an answer choice like those presented above.