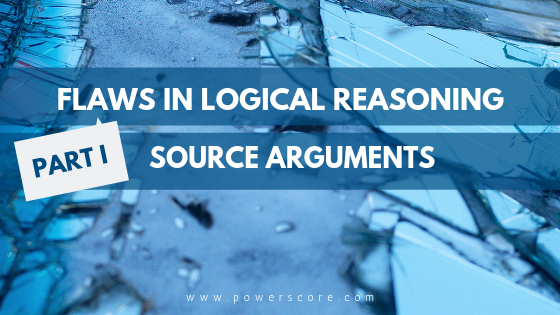 A common mistake found in several Flaw in the Reasoning questions is Source Argument. It is one that should be familiar to most test takers from their daily experiences. A “Source Argument” is also known as an ad hominem attack, meaning “to the person”. It commits a singular, consistent mistake by attacking the person/group making a claim (the source) as opposed to attacking the details of the claim itself. The LSAT is concerned solely with argument forms and their validity. An author doesn’t do anything to undermine an opponent’s position by focusing on the character or motives of the argument’s source. By failing to address the argument itself, their attack is essentially irrelevant.

How to Identify a Source Argument

You’re likely familiar with this because it’s an often-favored style of rebuttal, particularly with children and, sadly, politicians. I’ll leave you to consider the extent of similarity between those two groups. Consider this example:

“Mayor Jones’ anti-DUI campaign should not be taken seriously. After all, the mayor himself was cited for driving under the influence in college.”

Should the mayor’s campaign be ignored based on the statement that he committed the very crime he is seeking to prevent? Of course not. An attack on the person leaves the merits of the campaign left unchallenged. Therefore, this argument against the mayor is a poor (flawed) one.

Source arguments can be easy to spot on the LSAT, as they almost always take one of two identifiable forms:

Consider this scenario. You encounter a stimulus where the author is attempting to disprove someone’s position by attacking the person/group behind that position. Next, they will ask you to describe the author’s error. What can you expect of the correct answer choice? Well it will contain a few predictable points:

Here are some examples of source arguments as described by the test makers:

You should always be on the lookout for arguments that address the nature of a claim’s source instead of the contents of the claim itself. You should be able to quickly choose the answer when asked to describe that flaw with the characteristics given above. Stay tuned for Parts 2-10 in the series! Make an effort to commit the flaws we discuss to memory and you’ll find yourself well prepared to respond to nearly any argument you come across.