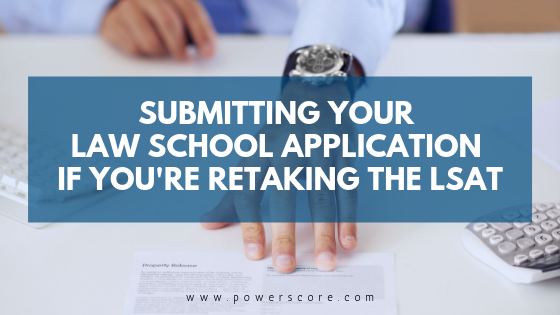 We had an interesting question posed recently that we thought we would share.

“When you submit an application to a law school (say, in November), but you are registered to take the test in January (or March), do law schools automatically see that and hold off on making a decision until they receive your score? Or do you have to “remind” them somewhere on the application form?”

Schools will not review your app until they receive a Law School Report. They request this from LSAC upon receiving a student’s application. LSAC does not send out until it is complete, which means it needs an LSAT score.

If You Have an LSAT Score, Submit Your Application, and Don’t Tell Schools You’re Retaking

The schools will see that you have a retake scheduled when they receive your updated Law School Report. Depending on the school’s policy, it’s possible that they will just proceed as if the application were final. They may render a decision with your initial score. It is much more likely that they will hold your application until the new score is available. Because of this uncertainty, using this approach is not recommended unless you don’t care which path the school chooses. A better policy is to write the school and request the action you prefer. Either ask them to review immediately with the score on record or hold until your new LSAT score arrives.

If You Have an LSAT Score, Submit Your Application, and Do Tell Schools You’re Retaking

They will most likely hold off on reviewing your application until the scores of the test you told them you were registered to take are available. However, you can increase this likelihood by specifically requesting they hold off until new scores are in. Alternatively, you can request them to immediately consider your application with your current score.

If you have a score on record, its generally preferred you write the school and request a course of action. As to how you can let schools know you’re retaking, there are a number of possibilities. Some schools have an area on the application form to note that information. Or, they may give you specific instructions on how to do it. For others, you need to email them to alert them of the retake. In any case, make sure they are notified in some fashion! Even if you’re accepted with your first score, you’ll want them to review your file again if you improve your score in case you qualify for any additional financial aid.

One of the important considerations in this process is whether you should apply earlier with a lower score or apply later with a potentially higher score. The data on this is overwhelming. Having a higher LSAT score is worth delaying your application. As law school admission expert Mike Spivey noted recently, in 19 of the last 20 cycles applicants would have been better off applying later with just a one-point increase. His example compared applying in November versus applying in January/February with a one-point improvement. Why would it be the case that just a one-point higher LSAT score is more important than an earlier application? Because of the quantitative nature of the LSAT and the fact that LSAT scores are used in rankings whereas the date of your application is not. When admissions committees are comparing two candidates, you can be sure they will compare LSAT scores but it’s highly unlikely they care about the date each applicant applied.

At the end of the day, an LSAT score above the range a school is looking for will give you a much greater admissions advantage than submitting your app early in the process. Don’t get me wrong, applying early also helps—but not as much as a killer LSAT score. Keep this in mind when weighing the pros and cons of submitting early vs. telling schools you’re retaking the LSAT vs. retaking and hoping you won’t get reviewed until after scores are available.

Fill out an inquiry to get started with an admissions consultant! Let’s get you into the school you want.