You are here: Home / Law School Admissions / Does Submitting an Early Law School Application Improve Your Chances at Getting In? 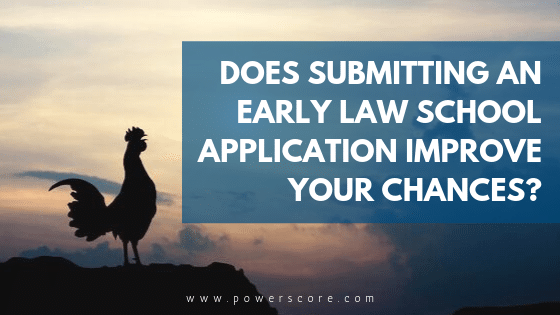 
There’s a lot of buzz about applying early. Everywhere you look online blasts the same mantra: “Apply as early as you can, apply today! Apply yesterday! If you don’t all hope is lost.” To be honest, having your applications ready to go on day one is not a bad idea. But, that’s for reasons wholly unrelated to whether or not it improves your admissions chances.

First of all, getting things done sooner rather than later gives you breathing room. Who knows what might happen a week from now that will prevent you from getting that application finished? If you have the time now, use it. Secondly, it’s a great way to spend that anxiety-ridden period between taking the LSAT and getting the results. You no longer have control over your score, so why not focus on something you can control ? But on to the question at hand. Does applying early actually have any effect on whether or not you’ll gain admissions to a given law school?

The answer to that question, as is so often the case in life, is that “it depends.”

Law School Numbers compiles data from applicants applying to law schools in the US News and World Report‘s top 100. Applying earlier is much more important if you’re gunning for the top 14 law schools and far less important if you’re not. Controlling for a variety of other factors we might expect to affect admissions outcomes, T14 applicants, on the whole, see about a 34% increased chance of admission for each earlier month they apply. September application vs. October application, for example. The effect outside the T14 is statistically insignificant when considering the rest of the T100 law schools as a whole.

Your Application is King

Even for schools where applying earlier gives an advantage, applicants should make sure their applications are the best they can be before hitting “send” on them. In other words, rushing through an application and doing a poor job with it in order to get yourself a boost by applying earlier is unquestionably a bad strategy. While this analysis can control for factors such as LSAT scores and undergraduate GPAs, it cannot control the overall quality of the application. Law schools take all components into consideration, like the personal statement and recommendations. The last thing you want to do is send an application with a poorly written personal statement because you wanted to get it in earlier.

Your LSAT Score is More Important

Another important point regards LSAT retakes. Some test takers may consider foregoing a retake in order to get their application in earlier. Our recommendation is not to do that. An earlier application might give you a boost, but that boost is often offset by as little as one extra point on the LSAT. So, if you know that you can improve your LSAT score and still get your application in for the cycle, then you should absolutely do that.

Stay tuned for a more in-depth analysis of the T14and the rest of the T100, as well as numbers for schools outside the T14 where applying earlier does appear to make a difference. We also include the odds of admission for each additional LSAT point, so you can compare that boost with the earlier application boost.

Of the Top 14 law schools, the data for all schools except Yale (whose admissions process is very unique) demonstrate an advantage to applying earlier rather than later. That’s right: 13 out of the T14 seem to provide a boost for applying earlier. This is probably the natural result of rolling admissions processes at schools with highly competitive admissions criteria and many more applicants than available spots. As spots fill up, fewer spots remain, and the competition gets a bit stiffer as the cycle progresses. In any case, the following table lists those schools in descending order of boost, along with the school’s LSAT boost.

Controlling for other factors, the increased chances of admission for a September vs. October application (or October vs. November, etc.) ranges from 14% at Duke to a whopping 129% at Chicago.  Getting that application in earlier to these schools can get you a bit of an edge in terms of acceptance. However, at all schools except Chicago, Berkeley, and Michigan, even a 1 point increase on the LSAT will have a greater effect on your chances than applying a month earlier. While it’s great to get your application in as early as possible, if you think you could raise your LSAT score a few points on a retake, it definitely offsets any delay in applying.

For the vast majority of the schools in the T100 outside the T14, there is no statistically significant advantage to applying earlier. In contrast, each of the schools do show a statistically significant advantage to higher LSAT scores and GPAs. Of the 75 schools* for which we had sufficient data to analyze, only 6 schools demonstrated any kind of advantage for applying early (8%, compared to 93% of T14 schools), and five schools actually seem to disadvantage earlier applications! The following table mirrors the table from above for the rest of the T100 schools which show some effect, positive or negative, of earlier applications.

Table 2: Increased Odds of Admission for Earlier Applications, the Rest of the T100

Again, for every school except SUNY Buffalo, the advantage of applying in an earlier month is more than offset by a 1 point increase in the LSAT score. In terms of why earlier applicants seem to be disadvantaged for some schools, we can only speculate that some schools may end up overestimating the quality of any given year’s applicant pool, and as the cycle goes on, criteria loosen up a bit.  That, again, is only speculation. One thing to note about this is that we controlled for whether applicants applied as binding early decision (ED) candidates. So, the effects of an earlier application and an ED application are independently measurable.

The data we use in this analysis comes from applicant-reported data from Law School Numbers for the 2009/10 through 2015/16 application cycles. Keep in mind that applicants submit this data, not the schools themselves. Although we did our best to clean up the data and eliminate clearly erroneous or fraudulent entries, any reading of this analysis must take into account the imperfect nature of the data.

We analyzed the effects of earlier applications by running logistic regressions, treating a decision outcome (acceptance or rejection) as the dependent variable (we eliminated all applications for which the ultimate status was unknown from the data). In running these regressions, we controlled for an applicant’s LSAT score, undergraduate GPA, underrepresented minority status, nontraditional status, sex, and whether or not the applicant applied through an early binding decision process. We did not, and based on the data could not, control for other important factors, such as the overall quality of the application, applicants’ resumes, or the quality of an applicant’s undergraduate institution.