You are here: Home / LSAT Prep / Should You Retake the LSAT? 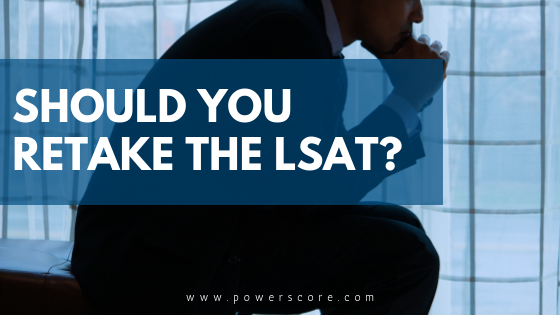 When LSAT scores come out, many students are faced with the uncomfortable reality of a possible retake. With that in mind, let’s consider two of the most common questions regarding law school admissions. “Should I retake the exam? And if I do, how will law schools interpret my scores?”

In order to help you better understand your options, we have researched the policies of LSAC and top law schools. We’ve also spoken with many admissions counselors regarding these issues and compiled our findings below.

We’ll address some facts about the LSAT and admissions first, then weigh the considerations that factor into a potential retake.

How Many Times Can You Take the LSAT?

In the summer of 2019, LSAC reinstated limits on the number of LSAT attempts you’re allowed. Test takers are subjected to the following rules:

One positive to come out of this is that these rules were not retroactive, meaning you started with a clean slate as of the September 2019 exam. We covered these changes in detail in Episode 17 of our PodCast. Note: the limited-retake policy was briefly suspended with the introduction of the LSAT-Flex in May 2020. It was reintroduced beginning with the October 2020 LSAT-Flex and remains in effect through 2022.

That being said, don’t let the limitation scare you. For one, most schools still seem to prefer applicants with 4-5 or fewer attempts. That is, at five or more attempts, schools may begin to question why it’s taking so long for you to hit your target, and this often warrants an addendum explaining your situation. Secondly, repeat testing pushes you later into each application cycle. Rolling admissions can then begin to work against you and app deadlines could prevent you from applying for the upcoming term. So be sure to consider your planned test dates and intended-school deadlines to ensure you make the cut.

Thus, while there are limits on the number of attempts allowed, unless you find yourself eyeing your fifth (or more) LSAT or considering exam dates late in the admissions cycle, sitting for the test multiple times isn’t automatically problematic.

How Are Multiple LSAT Scores Reported?

There’s some extremely good news for test takers here! Prior to 2006, LSAC policy was as follows:

“LSAC will automatically report the results of all LSATs in your file, including cancellations and absences, since June 1, 2002 [five years’ worth of data]. The scores are averaged and also appear separately. (Note: LSAC rounds up when calculating the average score).”

However, in 2006 the ABA (American Bar Association) changed its policies. It began requiring schools to report only the highest LSAT scores of students, regardless of how many times they had taken the test:

…beginning with the October 2006 Annual Questionnaire, which collects LSAT data on the Fall 2006 entering class, the Questionnaire will seek 75th percentile, median, and 25th percentile LSAT data based on the high score rather than the average score for matriculants who took the test more than once.

What this means is that since schools now report only their students’ highest LSAT scores to the ABA, all law schools now consider only an applicant’s highest LSAT score, and no longer take the averaged score into consideration. Yes, schools will see all of your scores from the past five years. And they do pay attention to scoring trends. If your four attempts show four consecutive declines, for instance, you’ll want to explain that pattern. In the end, it’s the highest number that’s reported so it’s the highest number that matters.

Why is this good news? It means that if you retake the LSAT and improve your score, schools will disregard your lower score(s) in favor of your best performance. The averaging “penalty,” so to speak, of multiple attempts has been entirely removed.

Now that we’ve addressed the test-taking and score-reporting policy, let’s consider some of the questions you should ask before committing to another LSAT.

How Can You Tell if a Retake is Worth It?

First, you need to examine where you stand right now. Ask yourself the following:

How accurately does your score reflect your ability?

You probably have a good sense of how well you expected to do on the LSAT based on your practice test scores and your experience as you prepared. If your official score is far below your results on practice tests, or if you performed significantly worse in a particular area than is typical, you have good reason to believe you could improve your LSAT score on a retest.

On the other hand, if your real score was within a few points of your last several practice tests, and remains representative of your PT performance close to the date of the next administration, the chances of it miraculously improving on test day are minimal at best. Simply put: how you perform as you practice is likely to reflect how you’ll perform on the real thing. So if your practice results are unsatisfactory, a retake is almost certainly going to be as well.

How did you feel the day of the test?

This is similar to the question above, in that you need to ascertain whether the score you received was representative, or whether certain factors likely absent during a retake could have negatively affected your performance.

Were you sick or upset about something? Was there an issue during the test (a tech glitch, for example) that caused problems or affected you? How much did test anxiety play a role in your performance? If a distraction made you feel that you were performing worse than you usually do on a test, it would probably be worth taking the LSAT again when you’re feeling well enough to do your best, and when disruptions are less likely to impact your final score.

How does your score measure up?

Consider the LSAT averages or ranges of students the schools you’re applying to admit to their program, and see how your score compares. If you’re already above (or towards the 75th percentile of) the qualifications your schools look for, there’s probably no need to bother with a retest just to gain admission. Similarly, if you’re near or just below the average acceptance score, spending your time and effort improving other parts of your application—personal statement, supplementary essays, letters of recommendation—may prove more valuable than another point or two on the test. Obviously, if you’re well below your target schools’ averages, the need to retake the LSAT becomes extremely clear.

Similarly, don’t underestimate the monetary value of a higher LSAT score. Scholarship offers are often predicated on credentials, so a higher score may not be necessary to get in. But it could still be worth tens of thousands of dollars in financial aid!

If you do decide that a retake would potentially be beneficial, there are still two questions to ask yourself.

How will the next time be different?

Let’s face it: you’re considering a retake because, so far, you aren’t where you want to be. For that to change on your next attempt, you need to change the way that you approach the exam. Whether that means you invest in a course or a private tutor, or simply dedicate more time to your studies and diligently work to analyze and correct your shortcomings, without a different understanding of the LSAT there’s no reason to expect a different score. So be honest with yourself about how you intend to prepare for the next attempt. Only commit to it if you know there’s a significant chance that you’ll be a different, better test taker on the coming exam.

Are significant score improvements possible, given the right preparation?

I routinely (daily, in fact) hear this sort of question regarding potential score increases. And my response is generally this: the LSAT is not an I.Q. test! That is, it tests only how well you understand the LSAT. It’s not testing your innate intelligence, the depths of your vocabulary, or your subject knowledge in Science or the Law. Conquering the LSAT is solely dependent on recognizing the common elements used by the test makers—from reasoning types, to Logic Games setups and scenarios, to answer choice traps—and then having powerful strategies with which to respond to those elements. That’s it.

The takeaway is that dramatic score increases are possible, often in a fairly short period of time, provided you receive proper training and practice with the right approach. We routinely see students achieve 15-20+ point score increases after studying the proven techniques taught in our courses. The use of real LSAT questions, examined and deconstructed by world-class instructors with top percentile scores, allows people of all abilities to break down the LSAT and unlock their true potential.

So, Should You Retake the LSAT?

Retaking the LSAT isn’t a decision to make lightly. It requires time for continued prep and further testing. Undoubtedly, it will cause extra stress as you work to get the rest of your application in order. But if you know that your current best score isn’t sufficient to get you into the school(s) of your choice, and certainly if you think you can do significantly better, it’s worth the time and effort to give the LSAT another shot.

Considering a retake but wondering if it’s the right decision? Let us know in the comments section below and we’ll happily assist you further!