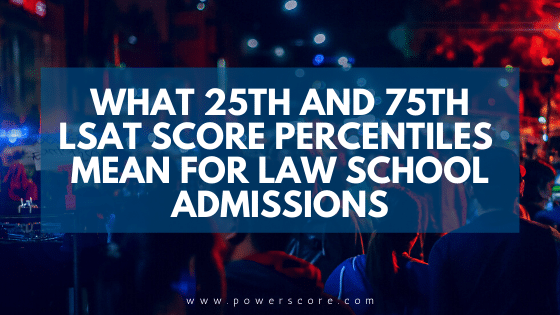 With your LSAT score in hand, it’s time to consider what that number means for your admissions odds. Everyone knows that an LSAT score is almost universally prized above all other factors. It often counts more towards an acceptance than GPA, letters of rec, personal statement, and resume combined! Often several times more than that collective “other.” But exactly what does this number mean to the schools you intend to apply to? Let’s investigate.

I should start by noting that I consider this a companion piece to this excellent article. Definitely give it a read! What follows is an expansion on the numerical quantifiers law schools report to signify entrance based on LSAT score. The post fills in several critical details elsewhere, not least in suggesting that an analysis like the one below is equally applicable to GPA statistics. LSAT just happens to be on everyone’s mind at the moment, so it’s there that I’ll focus.

Each fall, law schools send their quantitative applicant matriculation data to the American Bar Association (the ABA), which then reviews the data as part of the accreditation process. You can read more about this process, and see the list of accredited schools here. The methodology has changed slightly over the years.

Specifically (or more numerically), the most commonly tallied LSAT figures are a school’s median LSAT score, 25th percentile score, and 75th percentile score for accepted applicants that chose to attend. These are also the ones you’ll encounter over and over in your research. Let’s look at each of those numbers.

This is the most obvious, although not necessarily the most informative 1. What this number tells you is the point that divides accepted applicants who enroll exactly in half. The number who enroll above this score is exactly the same as the number who enroll below it. There’s an extremely high correlation between median score and rank. Schools in the top 5 are all at or above 170, dropping all the way to a median of 160 for schools closer to 50th. Certainly, many factors go into rankings beyond LSAT scores, but it’s no coincidence that higher-ranked schools prefer higher-scoring attendees.

So what does a median score mean for you? Statistically, schools where your score is the median means, on score alone, you have a coin toss’s chance of acceptance. Presumably, that is the dividing line for yes and no. “Presumably” because these numbers apply to those who were accepted and chose to attend, not just those offered acceptance. Nothing to bank on, but not bad odds either. If you find yourself then very near your target school’s median, you need to do all you can to ensure the rest of your application is as good as it can be to tip the scales in your favor! 2

1 That’s also why I hesitate to call a near-median score informative. It’s simply an aside at that point, where your acceptance hinges much more on everything else. Your LSAT is enough to open the door, but you’ll need to shine elsewhere if you want to stay in the room.

2 It should come as no surprise that post-LSAT, the rest of your application takes center stage. It will figure prominently into the points made here.

The math is much the same as with median, but the implications are quite different. In the same way that a median score divided attending applicants exactly in half, the 25th percentile splits them into a 1:3 ratio, where only one of four people with that score or lower got in and enrolled. It takes little imagination to recognize the peril here. In essence what an LSAT score at or around the 25th percentile for a school means is that you’re not out of contention—1 in 4 succeed from that position, after all—but it’s going to take something extra special to make the cut.

Essentially, as Anne puts it in the article linked above, you “have to write your way into the school, using your softs [non-LSAT and non-GPA] to try to convince AdComs [Admissions Committees] that you’d be a solid addition to their incoming class, despite your low numerical indicators.” This is no small feat. The rest of your application needs to be absolutely stellar to compensate for the fact that your score will potentially lower the school’s LSAT average. Consequently, this affects their ranking. It’s risky! Don’t forget, schools put so much weight on the LSAT largely because it’s considered a predictor of success in your first year. Coming in with an LSAT score lower than 75+ of your fellow 1Ls is some cause for concern among the administration.

Understand I don’t mean any of that to imply that you shouldn’t apply, or won’t get it in, or can’t succeed if you’re admitted! I only want to impress on you the reality of your situation and the necessity of an application that excels everywhere else. I typically encourage people to apply to a few “long shot” schools and a few safeties as well.

This is a mirror image of the 25th percentile. 3 of every 4 applicants at or above are accepted and attend. There are few sure-things in law school admissions, but an LSAT score around a school’s 75th percentile marker makes “yes” an awfully good bet. To again borrow from Anne, following a performance of this caliber, “your job is to make sure your softs are good enough that they don’t ding you—in essence, you’re doing the opposite of what you’d be doing if your numbers are at or below the 25th percentile: You’re making sure you’re not writing your way out of the school.”

Just about the only thing you can do to get denied with a result in the top quarter of acceptances is to have something else on your application that negates the score. Sometimes that’s unavoidable. Again, it all hangs on the rest of your app. Although here it’s ensuring it doesn’t hurt you instead of relying on it to redeem your 25th percentile efforts. It should be unmistakably clear that all of this comes down to what you do next. How are you going to land on the favorable side of that median? Or be that 1/4 that overcomes the odds? Will it showcase all your hard work and make you outpace 3/4’s of your competition through the finish line? The answer, in every case, is that the remainder of your application needs to be perfect. You’re in the home stretch. Don’t blow it.

Finally, I want to make you aware of one of my favorite resources for researching data on nearly all of the ABA-approved schools in North America: LSAC’s LSAT/GPA Calculator. This tool allows you to input your undergraduate GPA and your highest LSAT score and get feedback on where each stands relative to attendees at individual schools. It also provides your odds of duplicating that result on those figures. It’s not a crystal ball of course, but it gives you a reasonably accurate estimation of how you’ll fare as you send off applications in the fall.