You are here: Home / Law School Admissions / Which Law Schools Are Splitter-Friendly? Which Ones Aren’t? 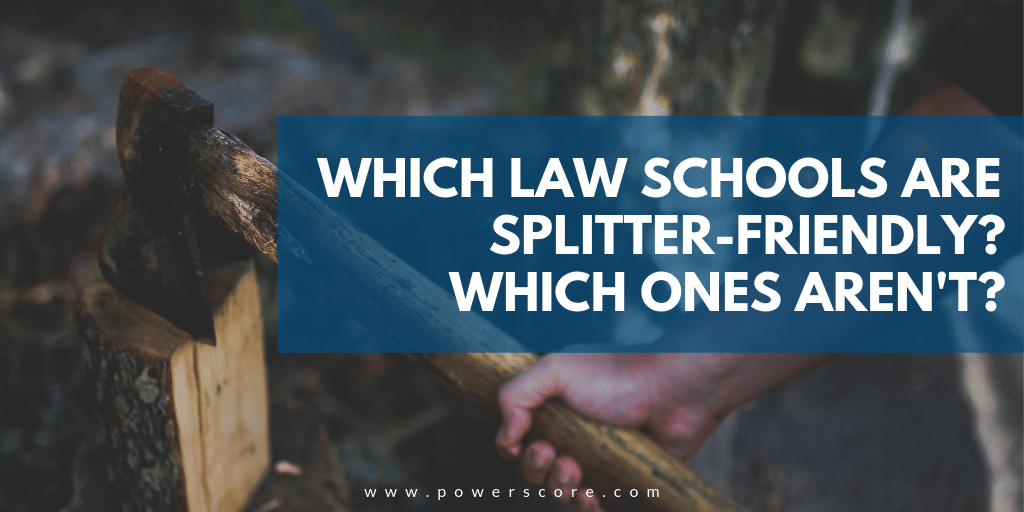 When you discuss law school applications, the question of which schools are “splitter-friendly” comes up pretty often, and it’s not really an easy question to answer. Are we looking for schools to which a high percentage of splitters are admitted relative to non-splitter applicants? Schools that seem to value an applicant’s LSAT score much more than his/her GPA? How about schools that are willing to go really low on the GPA scale to nab those high LSAT scores?

There is actually a lot of overlap between those questions, but they’re not all the same thing. There is a ton of anecdotal evidence out there, but the point of this blog is to try to get to the bottom of what the numbers themselves can tell us. With the “splitter friendly” question, it’s not all that easy.

By the way, if you’re not sure what a “splitter” is, then make sure to check out Dave Killoran’s post that breaks it all down: What are Splitters, Reverse Splitters, and Super Splitters? And, if you know what all of those terms are and know you are actually a Reverse Splitter, see our article about Reverse Splitter Friendly schools.

How to Rank Schools

What I have done here is try to create an index number that incorporates information to answer our questions. The table below shows the index and the data used to compute it. I have to stress that because there is so little data available, and especially little data available on URM applicants, the following applies to non-URM applicants only. It is based entirely on non-URM applicant data. Unfortunately, I had to exclude URM data because it can really skew the overall picture. I also excluded any schools I did not feel that I had sufficient data-points for analysis.

The mean index number for the schools included is 1.85, so I set that as a benchmark, and then broke the schools down into five categories:

Stanford and Berkeley were more than two standard deviations below the mean, as you can see. The neutral-friendly and neutral-unfriendly categories make me a little squeamish. Since they are all within one standard deviation of the mean, they’re all pretty average. In the end, I decided it was better to distinguish between the above-average and below-average middle, just to give readers a relative comparison.

Indexing in Order of USNWR Ranking

Remember, this is categorizing schools by their relationships with each other. As you can see, there’s not a whole lot of splitter love. In the grand scheme of things, going on in the Top 14, and in general, there is a lot more towards the middle/bottom of the Top 100. Still, just as we can compare all the schools among themselves, we can isolate the Top 14 and do the same thing. And since someone is surely interested in how that shakes out, why don’t we just do it right now?

For the Top 14, I kept the categories and color-coding the same but based everything off the mean index score of just the T14, which was 1.29 (much lower than the overall average). Here are the results:

Northwestern and UVA are the only schools we could call splitter friendly (again, compared only to the other Top 14 schools), and Columbia, NYU, Penn, Michigan, Duke, and Georgetown all fall on the friendly side of average. This – combined with the relative splitter-unfriendliness of the California schools, more or less confirms the conventional wisdom you hear thrown around, but I guess I should stress once again that there’s really not a whole lot of splitter friendliness in the T14 (outside Northwestern and UVA, I’d say).

As always, please keep in mind that this analysis is based on numbers taken from publicly available applicant-reported data (which I have cleaned to make as accurate as possible), and does not come from the law schools themselves. In other words, I wouldn’t look at any of the numbers in this table as perfect representations of reality, but it does make for interesting comparison and reflection, and hopefully is of some use to those pondering applying to law schools.