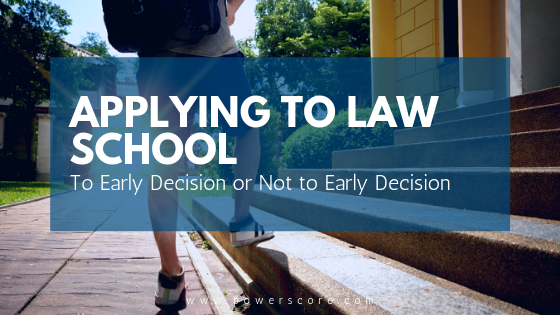 Being a law school applicant is a tougher job than most people probably think. The first and most obvious obstacle to overcome is the LSAT, which is a real (though very slayable) beast. Once armed with an LSAT score, however, a whole new set of stressors emerge with the law school application process. Part of this process necessarily involves winnowing down the daunting list of potential schools you’d like to attend. There are 200+ schools that you’ll need to narrow down into a realistic and manageable list.

Often, part of an applicant’s consideration process is deciding whether to apply through an early binding decision, or ED, process. But, are some schools more ED friendly than others? It appears so.

Currently, more than 25 law schools offer an ED option. The general idea is this: if you are completely in love with a school and absolutely sure you would attend upon admittance, you can apply as an ED applicant.

The typical ED application will receive an expedited review and an expedited admissions decision. For some applicants, this means an expedited chance to start working out the logistics of their next three years. As a bonus, many rejected applicants at the ED stage are placed on “hold.” They are then reconsidered along with the rest of the applicant pool as “normal” applications later. The flip-side of all this goodness, though, is a serious restriction of flexibility. If an ED application is accepted, then the applicant must turn down all acceptances from other school. As in, they are required to attend that particular school or not go to law school at all that year.

While it’s true that schools typically claim that ED applicants will be reviewed along the same criteria as other applicants… They usually note that the admissions committee will consider the applicant’s demonstrated enthusiasm for the school during an application’s review. Many law students interpret this as a wink-wink nod-nod type of hedging: “We’re not making any promises, but…”

In other words, many law students believe they will give themselves a leg up by submitting an ED application. This is especially true for law students who believe they are long-shots for a particular school. This analysis does not apply to some ED programs. Schools such as Northwestern, George Washington, University of Texas, Emory, and Boston University offer substantial, sometimes full, scholarships to students accepted through their ED programs. Applying ED to these schools is much different and they’re theoretically harder to get into as an ED applicant.

The “Boost” of Applying ED

The question of which schools do seem to offer a “boost” to ED applicants is one which is heavily discussed amongst law applicants and can create a lot of anxiety and indecision for an applicant. I have done some analysis to try to help answer this question using applicant-reported data from Law School Numbers from the 2009-2010 application cycle through the 2015-2016 application cycle. Keep in mind that this data does not come directly from the schools. Instead, they come from law school applicants who have reported a variety of factors. These factors include LSAT Scores, GPA, minority status, nontraditional student status, timing of the application, applicant’s gender, and admissions decisions. Due to the imperfect nature of the data, it’s important to take this analysis with a grain of salt.

Results from Our Data

The results are based on logistical regression analysis that uses the admissions decision (accept or reject) as the dependent variable. Our variable of interest is whether or not ED applications demonstrate an independent effect on an applicant’s acceptance or rejection.

The analysis controls for several factors which we would expect to affect an admissions decision:

There are some factors that are impossible to quantify and for which we have no data, so these are not controlled:

Unfortunately, there was not enough data available to analyze the effect of ED applications for a few universities:

Schools That Seem to Have an ED Boost

Schools That Seem to Have an ED Penalty

The inclusion of George Washington University and Emory on this list makes perfect sense.  Given the sizeable scholarships ED applicants receive at these schools, one would expect the ED process to be competitive.  The same can’t be said for NYU, and I’m not sure I completely understand why they would be more likely to reject ED applicants than regular decision applicants with identical characteristics.  I should point out that the data set for Emory is necessarily smaller than for other schools, since only includes data from the 2012/13 application cycle (when Emory started its ED program) onward.

Schools That Seem to Treat ED Applications No Differently

So what’s the bottom line?  Great question.  Based on this analysis (and, one last time, you have to remember that it’s based on applicant-reported and incomplete data), I would say:

Schools that may be worth an ED application: Applying ED to Chicago or UVA might not be a bad idea, if you’re absolutely sure that you want to attend (and doubt you’d get in as an RD applicant). An ED to Northwestern seems like an especially good idea if you’re either sure you want to attend, or think you’re unlikely to get into more attractive options, since you appear to be more likely to get in as an ED applicant (for some reason), and it comes with that full scholarship.

If you’re sure you want to go to Duke or the University of Pennsylvania, it does seem like an ED application might give you a better shot.  Finally, if you’re not interested in applying ED elsewhere instead, it may also be worth it to apply ED to the University of Texas, Boston University, George Washington University, or Emory; although none give you any kind of increased chance of admission (and GW and Emory each give you a decreased chance of admission as an early applicant), they do offer substantial scholarships and/or other benefits to ED admits.

Schools that are probably NOT worth an ED application:  I would not waste an ED app to any of the schools on List Two, since you don’t seem any more likely to be admitted than if you applied RD (so why waste your one ED application or otherwise tie your hands?) or NYU, which the data indicates is less likely to admit ED applicants.

Tune into the newest episode of the LSAT Podcast w

Our Stuck at Home Sale is officially continuing th