You are here: Home / LSAT Prep / Why Breaks from the LSAT Can Increase Your Score 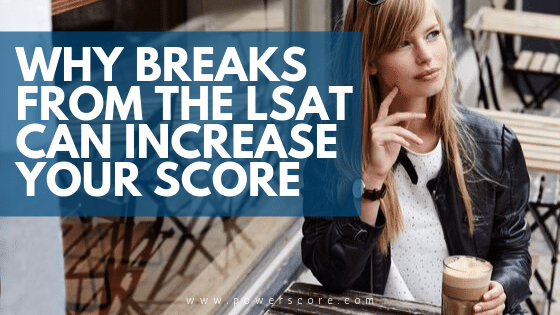 When you create a study plan for the LSAT, make sure to include liberal breaks in your schedule! How long of a break are we talking? Anywhere from a few days to a few weeks. At first glance, that advice may seem counterintuitive. To increase your score, plan to not study? But yes, it will help, and here’s why.

Studying for the LSAT isn’t like studying for a History or Math test. In those exams, small universal details and rote memorization play a big role. If you take time away from studying before such a test, you might forget a date or a formula, and that could cost you questions on the exam. But the LSAT is a process and concept test. Your understanding of the big picture ideas in play is crucial and the details change constantly.

For example, one test you take has a question about banks. Then the next one you take has a question about flowers. Although vastly different topics, they both address the same concept. Thus, much of LSAT preparation is about abstract concepts and techniques. To mentally absorb these ideas and apply them seamlessly, your mind needs to place these elements subconsciously and situate them properly for instant recall. This takes time and it’s one big reason that you can’t cram for the LSAT. But it also means that when you take breaks from studying the LSAT, your mind keeps processing the ideas and integrating them into your analytical structures.

While taking short breaks is always good, four specific groups of test-takers can benefit from even longer breaks.

If you have a long-term study plan, you must include a few lengthy breaks in your schedule. I occasionally talk to students who have intense study plans (think 8 hours of studying a day for a year—no kidding!) and they often feel like any break will jeopardize their progress. It’s actually the opposite. Not taking breaks will lead them to join the next group on this list, the LSAT burnouts.

What’s LSAT burnout? It’s what happens when you study for so long and hard that you literally get sick at the thought of seeing another LSAT question. You’d rather gouge your eyes out than study any more. Ok, maybe it’s not quite that bad, but you get the point. While most people never reach burnout while studying, for those who do, it can be quite frustrating. These students benefit heavily from a long break because they can recharge and return to the LSAT refreshed. Oftentimes, they return several points better than where they left off.

3. Those on a Score Plateau

Students preparing for the LSAT often run into score plateaus. This is when, despite continued studying, their score fails to increase. While there are different causes and cures for this problem, taking a break from the test is one tool that is often overlooked. Just the break alone will often provide the push needed to break out of that plateau. Now, if you’ve only been studying for two weeks, you shouldn’t take a month off. Make sure to vary your break in relation to how much studying you’ve already put in.

Consider a student who takes the October LSAT and waits for their score before deciding whether to take the LSAT again. Scores normally aren’t released until the end of October and in the interim, they decide not to study the LSAT. While this may seem like a bad strategy, this somewhat unintentional break (these students often don’t know if they will take the LSAT again and hope they won’t) often results in a slight score increase when they begin studying again. While that might not make up for the fact that they are taking the LSAT again, it is a nice bonus that helps soften the impact.

So, go ahead and take a brief vacation from the LSAT now and then. You’ll often find that when you come back, you are actually better than you were before. And when people ask why you aren’t preparing for the test, just tell them you are—subconsciously!