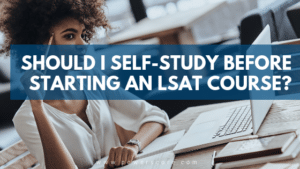 This is a question we frequently encounter on our forum, and with good reason. One of the most important things you can do in law school admissions is to plan ahead. If you signed up for an LSAT prep course that doesn’t begin for a while, you’re probably wondering if you can do anything in the meantime. Of Course! But, before we tell you to spend another couple hundred bucks on study aids, let’s make things clear. Our LSAT courses are designed … END_OF_DOCUMENT_TOKEN_TO_BE_REPLACED

If your LSAT test administration is on the horizon, you're likely focusing on the final countdown to the big day. At this point, you (should) have already invested a significant amount of time and effort into preparation. Maybe you took a course, worked with a tutor, or used our free self-study site. Ideally, you also have a number of practice tests under your belt and an effective and efficient approach to the test. Your opportunity to crush the … END_OF_DOCUMENT_TOKEN_TO_BE_REPLACED 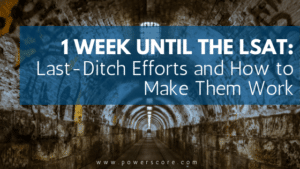 Before we begin, let's get one thing out of the way. If you haven't already studied for the LSAT for at least 1-2 months, there is little you can do in the last week before the test. Yes, life can get in the way and even the best-laid plans go astray. Unfortunately, you cannot cram for the LSAT. It's a test of how you think, not how much you know.Unlike most knowledge-based tests, the LSAT measures whether you possess the skill set necessary … END_OF_DOCUMENT_TOKEN_TO_BE_REPLACED 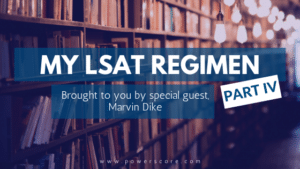 PowerScore student Marvin Dike blogs about his comprehensive study regimen so that our readers can learn from his experience. Make sure you read Part I, Part II, and Part III. For the last piece of the breakdown of my study regimen, I will take you into what I do every single day, along with some tips about how I handle the pressure and anxiety and my mindset. Before we get into it, you should know that my allows for more flexibility than most. … END_OF_DOCUMENT_TOKEN_TO_BE_REPLACED 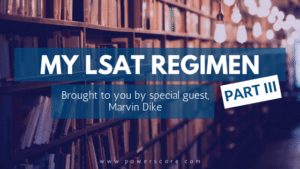 PowerScore student Marvin Dike blogs about his comprehensive study regimen so that our readers can learn from his experience. Make sure you read Part I and Part II. Continuing from my previous entry, here we talk about the skills you need to master Reading Comprehension and Logical Reasoning. Ready to get at it? Reading Comprehension: A Cautionary Tale In Reading Comp, LSAT makers reward you for having short term memory. That may seem obvious … END_OF_DOCUMENT_TOKEN_TO_BE_REPLACED 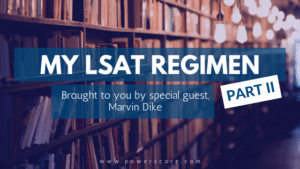 PowerScore student Marvin Dike blogs about his comprehensive study methodology so that our readers can learn from his experience. Make sure you read Part I! Congrats! You completed the PowerScore class or you finished reading all the PowerScore Bibles, so you're ready to take the LSAT soon right?! WRRROOOONNNNGGGGG.All you've really done is gotten a grasp of the foundation of the curriculum. You haven't mastered it. You understand … END_OF_DOCUMENT_TOKEN_TO_BE_REPLACED 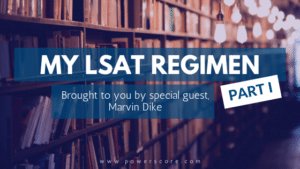 First things first, a little about myself. I graduated from college in 2013 and have a fantastic support system around me. I'm from Houston Texas, the greatest city in the world (go Astros). My undergrad GPA leaves a lot to be desired, so if I want to get into a solid law school, I have to crush my LSAT. I'm not trying to get into an Ivy League school or even a top 25 school. Realistically, a school in the top 50 range is ideal for me. I've … END_OF_DOCUMENT_TOKEN_TO_BE_REPLACED

Which prep course should you take after reading the PowerScore LSAT Bibles? This is a fantastic question that we get frequently, and in today's LSAT Forum Post of the Day, LSAT expert Nikki Siclunov offers some tips to a student on how to find the best course fit for you. Here's a quick preview. But be sure to check out the full thread to read the entire explanation our team provided:The Forum posts selected for this series are chosen … END_OF_DOCUMENT_TOKEN_TO_BE_REPLACED

There is little doubt that prep courses give you the most bang for your buck, and it's no surprise that they are an extremely popular way of preparing to take the LSAT. According to LSAC's own research report, students who use official LSAC test-preparation materials (i.e. PrepTests), non-LSAC books (such as the Bible Trilogy) and commercial test-prep courses tend to have higher scores than those who did not use such methods. Most students, LSAC … END_OF_DOCUMENT_TOKEN_TO_BE_REPLACED

When the October 2013 LSAT was released, it was called PrepTest 70. In other words, there are 70 licensed LSAT's, containing 7,000 questions for you to use in the course of your LSAT prep. Sounds daunting? It is, if only because you know someone who is doing all 7,000 questions (and complaining they aren't enough).To put this in perspective, hundreds of test-takers have managed to get a top-1% score without doing anything near 7,000 … END_OF_DOCUMENT_TOKEN_TO_BE_REPLACED