You are here: Home / LSAT Prep / 1 Week Until the LSAT: Last-Ditch Efforts and How to Make Them Work 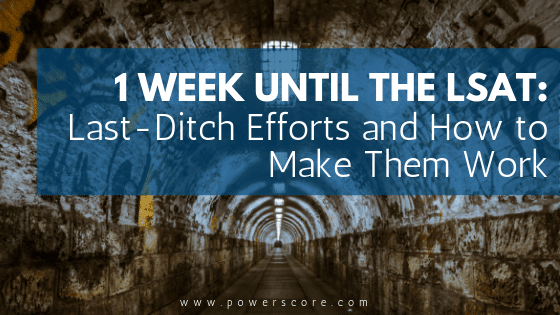 Before we begin, let’s get one thing out of the way. If you haven’t already studied for the LSAT for at least 1-2 months, there is little you can do in the last week before the test. Yes, life can get in the way and even the best-laid plans go astray. Unfortunately, you cannot cram for the LSAT. It’s a test of how you think, not how much you know.

Unlike most knowledge-based tests, the LSAT measures whether you possess the skill set necessary to excel in law school. For example: close reading, critical reasoning, rule application, and information synthesis. These skills develop over time, not in one week. If you put off studying for the LSAT until the final week, you’re better off taking the next one. Plan your studies accordingly.

Assuming you’ve been preparing diligently, with a tutor, one of our courses, or self-study plans, there is still a lot you can. Last-ditch efforts do work, if you know exactly what to and what not to do.

Ideally using recently released practice tests, take 2 more the weekend before the test. One on Saturday morning and one on Sunday morning. Add an “experimental” section to each test. The goal is twofold: to build stamina and identify any outstanding weaknesses that you need to address. By taking the tests in the morning, you will obtain a more predictive score result. You’ll also be able to mentally prepare for the day of the test. Thoroughly review each test in the afternoon of each day.

Focus on Quality, not Quantity

When reviewing your practice tests, stop and take a detailed look at what’s going wrong. Don’t just focus on the questions you missed. Those you got right but weren’t 100% confident in your response deserve a second look as well. Take the time to write down a paragraph about each of these questions. Imagine you’re explaining them to a student scoring in the 140’s. No joke. This can take a while, but playing your own LSAT instructor is proven to be an exceptionally powerful study technique.

It’s unlikely that you’ll completely change your approach to Reading Comprehension in one week. You can, however, make progress in Logic Games. This is the section that is most susceptible to rapid improvement and a last-ditch effort can result in a breakthrough.

Assuming you still have room for improvement on that section, at least 50% of your study time next week should be spent on logic games. Ideally, you will re-do every single game that has ever given you trouble. If you kept a record of your performance on previous Practice Tests, identifying which games to review should be straightforward. Hopefully you’ve been utilizing our free LSAT Score Reports.

Chronic sleep deprivation can profoundly affect how much you get out of your test prep. It can adversely affect your performance on the test. You need 7 to 8 hours of sleep every night from now on. According to a study published in The New York Times: “Some of the most insidious effects of too little sleep involve mental processes like learning, memory, judgment and problem-solving. […] People who are well rested are better able to learn a task and more likely to remember what they learned.”

Apparently, sleep disruption also stresses the brain’s metabolism. The result is the “degeneration of key neurons involved in alertness and proper cortical function, as well as a buildup of proteins associated with aging and neural degeneration”. That doesn’t bode well for someone taking the LSAT.

The effects of sleep deprivation can last for a while and are not easy to fix. Even if you sleep for 8 hours the night before the test, it won’t be enough. Prolonged periods of sleep disruption can impede your ability to concentrate, read closely, and analyze information creatively. If you need to wake up at 6 AM on test day, you need to be in bed by 10 PM every night from now own. I cannot emphasize enough how important this is!

Focus on eating healthy and wholesomely for the next week. Make sure to consume sufficient amounts of complex carbohydrates, protein, and omega-3 fatty acids. The Wall Street Journal published research showing that your diet the week before a cognitive test can affect your performance. According to the WSJ article, “When 16 college students were tested on attention and thinking speed, then fed a five-day high-fat, low-carb diet heavy on meat, eggs, cheese and cream and tested again, their performance declined. Students who ate a balanced diet that included fruit and vegetables, however, held steady.” Now, you know better than to attribute causation to a mere correlation, but there is some evidence that proper nutrition affects cognitive performance. For more LSAT-related nutritional information, check out this post: Thought for Food: Eating Your Way to a 180.

Get Up and Move

Physical activity is known to improve learning. Moderate-to-low intensity cardiovascular exercise, such as walking or biking around the block, can have an immensely beneficial effect on your ability to learn and retain information. Don’t take our word for it: it’s a fact. Multiple well-controlled studies have shown a significant correlation between fitness and test scores. Although exercise is unlikely to make you “smarter,” the correlation is strong enough to provide some evidence that it does improve learning capacity, memory retention, and focus.

Try this: perform 15-20 minutes of moderate cardiovascular exercise before taking your next set of practice tests. Do the exact same thing the morning of the test, right after breakfast.

Imagine what you will do with your free time after the test! And I don’t mean this rhetorically. I’m asking you to actually imagine it, and even plan it to the last detail. You don’t need to sleep for 8 hours/day, eat well, or exercise. Screw all that! How about a weekend in Bermuda, a sailing trip to the Galapagos, or perhaps a private jet trip around the world? OK, maybe not that last one, let’s wait till you make partner. Either way, the mere act of planning an enjoyable experience after the LSAT can help alleviate stress and boost your confidence on the day of the test.

Get Your Ducks in a Row

Print your admission ticket and make sure you know the LSAC test-day regulations . For more information on what to do the day before the test, check out our checklist in Test Day Preparations. 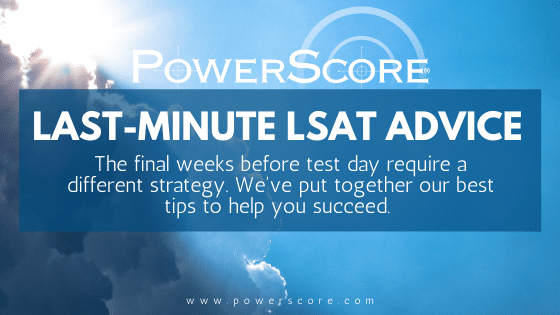