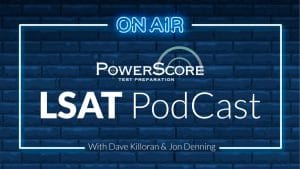 Episode 17 of the podcast features some game-changing news from LSAC concerning their new retake policies, severely restricting the number of times test takers can sit for the LSAT despite it being administered 10 times each year. While this information hasn’t been made public by LSAC yet, we’ve got you covered with a detailed overview of precisely how these repeat limits will affect your prep plans.You can find the episode below, but make sure to subscribe/follow and rate/review on Apple Podcasts, Spotify, YouTube, or Stitcher! … END_OF_DOCUMENT_TOKEN_TO_BE_REPLACED

Episode 16 of the podcast features an in-depth review of the recent June 2019 LSAT, as Jon and Dave discuss the test section by section and highlight the toughest content, overall student impressions (as well as some unfortunate test day horror stories), and our official curve prediction. There’s also a brief look ahead at July and an overview of PowerScore’s new digital testing platform!You can find the episode  below, but make sure to subscribe/follow and rate/review on Apple Podcasts, Spotify, YouTube, or Stitcher! … END_OF_DOCUMENT_TOKEN_TO_BE_REPLACED

What is the Digital LSAT? Essentially, the LSAT you've grown to love (or hate,) but delivered on a tablet that you're given at the test center rather than a paper-and-pencil test. The content and structure of the test sections and questions will be exactly the same. The main difference is that the test is now delivered on Microsoft Surface Go tablets that are loaded with patented software developed by LSAC. The digital interface means no more filling in the bubbles on a separate answer sheet. Three cheers! The tablet features a timer with a 5-minute warning and you'll be able to interact with … END_OF_DOCUMENT_TOKEN_TO_BE_REPLACED

In Episode 4, Jon and Dave turn their attention to Parallel Reasoning questions—one of the most challenging and time-consuming question types in the LR sections—and outline the most effective techniques for solving them. They follow this conceptual discussion up with a detailed look at two real Parallel questions from the June 2007 LSAT and show you exactly how to apply their recommended solution strategies.You can find the episode embedded below, but make sure to subscribe/follow and rate/review on Apple Podcasts, Spotify, or YouTube! … END_OF_DOCUMENT_TOKEN_TO_BE_REPLACED 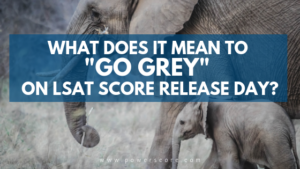 One of the most common talking points you'll hear leading up to an LSAT score release—and incessantly on the day scores become available—is the notion of "going grey." A hysterical flurry of "I'M  GREY!!" announcements is one of the most reliable predictors that scores are imminent. What's All This Grey Business About? How Can You Determine Your Own Color Status? Two quick notes before we begin. First, the grey/gray debate is really one of pure preference. "Gray" tends to be the American-ized spelling, while "grey" is much more commonly used throughout the rest of the world. Seeing as the … END_OF_DOCUMENT_TOKEN_TO_BE_REPLACED 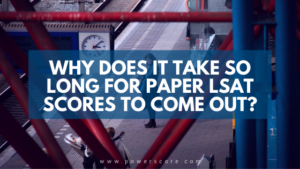 Once the LSAT is over, one of the most common complaints is that scores should come out more quickly. Given that we live in an era where tests are electronically scored and the results are transmitted nearly instantly by email, it sounds like a reasonable complaint. So, why does it take so long for LSAT scores to appear? Couldn't they get them out a lot earlier? To best understand what happens once you turn in your LSAT scoresheet, let's take a look at each phase of the process. Test Administration and Collection The first delay actually comes before most students take the LSAT. Typically, … END_OF_DOCUMENT_TOKEN_TO_BE_REPLACED 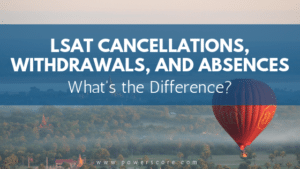 With the LSAT just around the corner, you may be taking a look at how your prep is going and thinking that you are simply not ready for the test. There's no shame in this; in fact, knowing when you are or are not ready for the LSAT shows a great deal of self-awareness and respect for your law school application. If you know you're not ready for the test, then there are a number of options available to you. We'll discuss each of them in detail so that you have all the information necessary to make the best decision on or before test day. You Can Withdraw LSAC allows you to withdraw your LSAT … END_OF_DOCUMENT_TOKEN_TO_BE_REPLACED 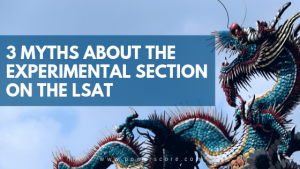 We talk a lot with students gearing up for an LSAT about the ideal way to take an LSAT practice test. One of the pieces we stress the importance of including is the Experimental Section. If you want a thorough discussion of the experimental section, go here, but for now here's a very brief description.Every officially-administered LSAT since 1991 contains four, 35-minute scored sections. 2 Logical Reasoning, 1 Reading Comprehension, and 1 Logic Games. It also includes an additional 35-minute, unscored "experimental" section. This section will be either a third LR, second RC, or second LG. … END_OF_DOCUMENT_TOKEN_TO_BE_REPLACED

Back in May 2017, LSAC began testing a digital version of the LSAT in select cities for limited applicants. Students were able to take a free-of-charge, tablet-based LSAT in what LSAC labeled a "Digital Pilot Test," where the test makers could gather data and collect feedback in the final stages of  their transition from a paper to a tablet format. The question on everyone's mind ever since has naturally been, "So when will a Digital LSAT become reality?," and up until today no one had a clear answer.Now we do.LSAC announced this morning that they will begin transitioning to a digital … END_OF_DOCUMENT_TOKEN_TO_BE_REPLACED

A few years ago I wrote a two-part article on "The Future of the LSAT," in which I examined the exam's history (Part 1) and speculated on what I believe could represent its future (Part 2). In discussing what the LSAT-of-tomorrow might entail, I noted, with some confidence, that the test makers would almost certainly begin exploring a computerized version of the test before long. Specifically, I wrote: "Just as LSAC is mindful of its test taking audience, so too is it aware of the other exams catering to its demographic. In particular the GRE, GMAT, and, to a lesser extent, MCAT. And what … END_OF_DOCUMENT_TOKEN_TO_BE_REPLACED

Hi LSAC,I hope everyone there is doing well! We just went through the June LSAT score release and I wanted to share some of my thoughts and the thoughts of many students I spoke to. Let me start by saying that we appreciate you moving up the score release timeline a bit and then (sort of) sticking to the announced release date. That definitely helped ease concerns! However, you also made a decision this past round that I think will have many adverse effects going forward. Because of that, I'd like to suggest you make a change for future release dates.First, more or less sticking to the … END_OF_DOCUMENT_TOKEN_TO_BE_REPLACED 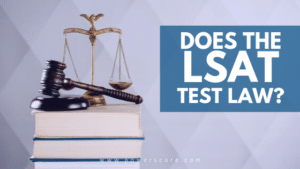 According to LSAC, the Logical Reasoning portion of the LSAT is designed to "evaluate the ability to analyze, critically evaluate, and complete arguments as they occur in ordinary language . . . These arguments mirror legal reasoning in the types of arguments presented and in their complexity, though few of the arguments actually have law as a subject matter."I frequently echo this final disclaimer at the start of my classes—the LSAT is a not a legal test per se, but rather a test of the kinds of reasoning skills that students will need to employ in law school. It is true that the law … END_OF_DOCUMENT_TOKEN_TO_BE_REPLACED

So your LSAT Test Center was closed? Here are the next steps you should take:Stay calm. Don't panic. This is something that LSAC is familiar with (it's happened numerous times in the past), and they won't leave you high and dry. Hold on to your admissions ticket. You'll still need it to take the test at a later date. Wait for an email from LSAC. They will contact you to advise that your test center is closed, and to let you know what the next steps are. Keep your schedule open. Don't make any plans for the next two to three weekends. Tests are typically rescheduled within 2 … END_OF_DOCUMENT_TOKEN_TO_BE_REPLACED

We get this question quite a bit this time of year: Is there a difference between the Law School Admission Council's CAS (Credential Assembly Service) and LSDAS (Law School Data Assembly Service)? The answer is yes. And no.The branch of LSAC that compiles all the elements in a law school application and sends it to each law school used to be known as LSDAS, acronym for Law School Data Assembly Service. LSDAS was the "applicant information clearinghouse" for law school applicants: it's where transcripts and letters of recommendation were sent for for processing, and it was also the … END_OF_DOCUMENT_TOKEN_TO_BE_REPLACED