You are here: Home / LSAT Prep / 3 Myths About the Experimental Section on the LSAT 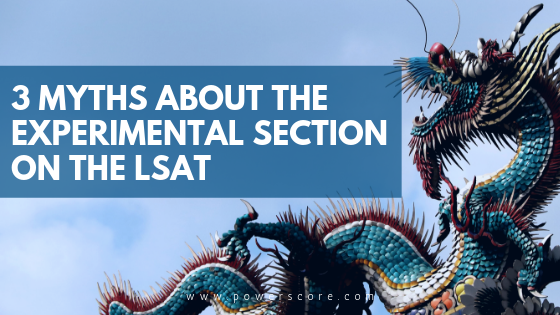 We talk a lot with students gearing up for an LSAT about the ideal way to take an LSAT practice test. One of the pieces we stress the importance of including is the Experimental Section. If you want a thorough discussion of the experimental section, go here, but for now here’s a very brief description.

Every officially-administered LSAT since 1991 contains four, 35-minute scored sections. 2 Logical Reasoning, 1 Reading Comprehension, and 1 Logic Games. It also includes an additional 35-minute, unscored “experimental” section. This section will be either a third LR, second RC, or second LG. It’s designed to pre-test questions that could potentially be used as part of a scored section on a future test. Essentially the unscored section lets the test makers determine both question validity and difficulty before those questions are officially put into play.

There are a few reactions that people tend to have when they learn this. The first, understandably, is anger. You devote 20% of your LSAT efforts to something that cannot help you! To make it worse, you aren’t told when that’s happening, either. You’re a guinea pig, and you’ll see absolutely no benefit from your hard work. That’s incredibly frustrating. Even though every tester before you went through the same thing to ensure you take a fair test, it feels like punishment.

The second reaction is equally understandable, and it’s a desire to somehow game the system, to crack the LSAT code and figure out which section doesn’t count before, or at least while, you grind your way through it. Imagine knowing in advance, or even just a few questions in, which section isn’t scored, and getting a 35-minute break right in the middle of the test! That’s a dream come true, no question, but it’s also LSAT doom if you’re in any way wrong. It’s this notion that I want to examine more thoroughly here by presenting three common beliefs about the experimental section. Hopefully this will set the record straight well before test day.

It’s Always One of the First Three Sections

I tell a story on occasion about one of the last times I went and sat for an official LSAT administration. Instead of spending the weekend prior to that June test hanging at home dodging friends’ requests to party, I went to visit my parents in my hometown. I knew I could count on some peace and quiet there before test day. To my (mild) surprise, in my test room was a guy I’d gone to high school with. He’s a smart kid from what I remembered. Someone I felt had a great shot at scoring well assuming he was prepared.

I didn’t pay much attention to anything but my Scantron sheet for the next several hours. Despite having Reading Comp as sections 1 and 3 (kill me), the day went as well as I could’ve hoped. Nothing puzzling or unusual, at least 6-8 minutes to spare in every section, and an overall feeling that a 180 was entirely likely.

I leave the testing center and head to the parking lot nearly skipping when I look up and see my old buddy with his head down, clearly defeated, shuffling towards his car. I hustled to catch up and get the scoop.

“Jon, that was one of the best LSATs I’ve ever taken! I crushed the first three sections, even the Games in Section 2 were a breeze! And that’s my weakest area…I was feeling so great at the break! And then I got to Section 4 and it was more Games and… man, I got destroyed. Maybe half right? At that point I knew it was over since my first Games didn’t count. I barely looked at Section 5 and just canceled my score in the room.”

In describing this to me he gave some detail about those games in Section 2 he dominated. Then those in Section 4 he didn’t. I only recognized one of the sections from my own, single-Games test: his Section 2. What this meant, and what I reluctantly told him, was that his 4th section. The one that caused him to quit, was Experimental. It didn’t count and it ruined his self-described best LSAT ever.

The myth that my poor, misinformed friend1 fell victim to is an old one. One that was actually true for a very long time. The Experimental Section will always be in the first three sections. Here’s the reality. In October 2011, LSAC removed the limitation that the experimental section must be among the first three sections. It then allowed the experimental to appear among the final two sections. For example, some October 2011 test takers had their experimental as section 4. Ever since, test takers have faced the possibility that their 4th or 5th section may not be scored.

Do NOT assume you’ll see the experimental before the break. All five sections are fair game.

Everyone Has the Same Experimental Section

This is another belief that has only recently become fiction! From the release of the first “modern” LSAT in June 1991, every administration had a single experimental section. If a test taker could determine that their first section was unscored, they could assume that everyone who took that exam had an experimental Section 1. Regardless of the order of other sections of all other test takers exams, the experimental section would stay put.

That’s a tremendously powerful bit of knowledge. It wouldn’t necessarily help while taking the exam since any way of checking would be considered cheating. But it would allow everyone post-test to know which sections counted and which one didn’t. It makes for a much more informed score prediction/cancellation decision.

This went on for the first sixteen years of the “modern era” LSAT! Like most good things, however, it came to an end with the June 2007 LSAT. The same LSAT that introduced Comparative Reading passages, interestingly. On that exam, LSAC started using test forms that gave different experimental section numbers to different students. They restricted it to the first three sections (until October 2011, of course,) but introduced variability within those first three. Test takers had experimental sections placed in different sections of the test.

Now an experimental section can be any of the five AND your neighbor’s is likely in a different section altogether.

This seems to be the most pervasive of all. Presumably because there is no definitive evidence to dissuade it aside from repeated failed identification attempts. It’s a “feel” belief, and that’s often much more difficult to disprove outright. I hear it all the time.

First off, the test makers are masters of making the familiar feel strange, and vice versa. The impression you get from a section or a single game/question/passage and/or how closely you feel it does or does not align with past experience, is precisely the kind of thing they are experts at manipulating to begin with. You should, under no circumstances, trust your ability to detect what they’ve pre-determined will or won’t count based on that impression. Simply put, how you feel is about as reliable as rolling a five-sided die. Not to mention, they are under no obligation to replicate anything to the point that you’d find it immediately recognizable or common. See: Circular Game in Feb 2014; Pattern Game in June 2014. This little “litmus test” is mostly a waste of time.

Secondly, the LSAT does not have a specific number of questions for every test. Several LSATs had 99 scored questions. Numerous tests have had 100 or 101 questions. And, while rare, there’ve even been LSATs with 102 questions (December 2010 begin the most recent). Trying to calculate the experimental after the exam based on question totals is, in a word, impossible.

There’s No Reliable Way to Predict It

What this all means is that there is no longer a reliable way for individual test takers to predict or determine their experimental section number during, or even immediately after2, the LSAT. It is possible to narrow it down to two or three sections, but it’s impossible to pinpoint it exactly. They can have free reign over the test! The moral of this is that you must now treat each section as though it could be experimental, and do your absolute best to dominate everything you encounter from the first question to the last.

1 There’s a happy ending to my friend’s story! He rallied, retook the LSAT, and ended up at Georgetown where by all accounts he’s doing exceptionally well.

2 I mean here, of course, that you can’t determine the experimental after the test by knowing only what you encountered. You CAN figure it out once you know what other test takers faced, by using their real content as a baseline for what did and didn’t count on your exam. For instance, if you had two sections of Logic Games (one being experimental), and a test taker with only one LG reports seeing certain topics in that section, then you can compare those topics to your own and know the section with those same games on your LSAT was real. Ditto RC and LR: knowing what was guaranteed to be real for others let’s you make deductions about your own test.