You are here: Home / LSAT Prep / What Does It Mean to “Go Grey” on LSAT Score Release Day? 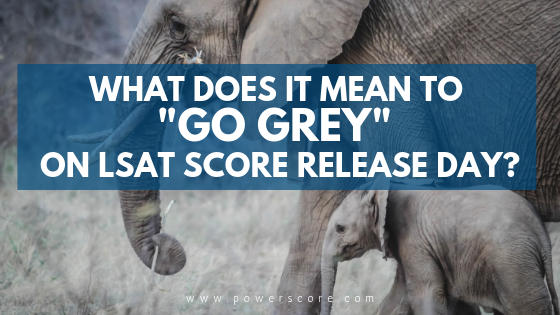 One of the most common talking points you’ll hear leading up to an LSAT score release—and incessantly on the day scores become available—is the notion of “going grey.” A hysterical flurry of “I’M  GREY!!” announcements is one of the most reliable predictors that scores are imminent.

What’s All This Grey Business About? How Can You Determine Your Own Color Status?

Two quick notes before we begin. First, the grey/gray debate is really one of pure preference. “Gray” tends to be the American-ized spelling, while “grey” is much more commonly used throughout the rest of the world. Seeing as the LSAT is a global exam, I’m using the broader spelling, “grey.”

Second, as always, remember that score releases are singular events. Scores can go out at different times—not only from person to person, but also from test to test. Since 2018 LSAC has been more consistent with when scores are released, but there can still be up to a three hour window of when the first batch of scores are released around 9:00 am EST to when everyone has received their score information.

Alright, back to the matter at hand. What’s with all the grey talk?

In your LSAC account—the one you created at lsac.org when you signed up for your LSAT—you’ll see a number of green icons under the various form columns for your most recent test date. It looks like this for any disclosed test (such as the traditional June, September, and December exams*):

At some point on the day that LSAT scores are to be released (typically around midnight) those icons will change. They will, you guessed it, go grey:

So How Long Will it Take Between Grey and Glory?

The past several score releases have seen icons go grey shortly after midnight EST on the official date. This is prompting some mild hysteria from those understandably interpreting that to mean scores were just minutes away. Alas, even with an icon change at 12:01 am, the release itself has still held steady at nine hours delayed. Beginning right around 9 am on the promised date, and inching along steadily, randomly, for the next three hours or so. Scores are released in random batches, entirely independent of your name, where you took the test, and—take heart here—how you did. Aaron Adams in Albany with a perfect score and a meticulously-bubbled Scantron may be in the first wave, last wave, or anywhere in between. Ditto for you.

Rule of thumb then is that grey gives the day, but only fate knows the hour.

*Many LSATs these days (and most in 2019-2020, in fact) are nondisclosed exams, meaning you won’t get a copy of the test like you do for the other, disclosed administrations. You’ll simply see your score and percentile. Your account icons still go from green to grey, but you won’t have as many icons. This is because the test content links will not be present. Same principle, slightly different presentation.