You are here: Home / Law School Admissions / What Does Your Transcript Say About You? 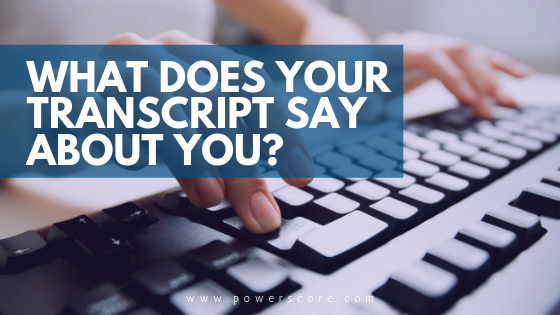 Next to your LSAT score, your GPA is the most important thing on your law school application. Like it or not, those numbers hold the greatest weight in your likelihood of getting into a particular school. Unlike your LSAT score, though, your GPA has another facet to it: your transcript. Whether your transcript has a positive or negative effect on your application depends on what’s on it.

Let’s take a look at what your transcript can say about you. Before we start, though, a disclaimer: not everyone’s transcript will be analyzed. I imagine that the people who run the greatest risk or chance of having their transcript reviewed fall into a few categories.

If you’re a PoliSci major (or any other “traditional” law school major) with a 3.5+ GPA, I don’t think your transcript will be scrutinized in any fashion. You can rest easy. For those of you that will get scrutinized, though, let’s see what the different aspects of your transcript may say.

What pattern do your grades follow? Do they start off strong and go down as you go progress through college? Or are they weak at the start and get stronger? What if they start off weak and never improve? Do they fluctuate up and down throughout your college career? All these different scenarios will say different things about you.

If you start off with strong grades that get weaker, it may indicate that they can’t handle more advanced courses. This assumption stems from the typical college career, with general courses in the beginning and more advanced, specialized courses later.

If you begin with weak grades that get stronger, you can make a good case about your potential and maturity. You can easily argue that you had a hard time at the start of college, for whatever reason that may be. Whether it was your first time on your own, you went crazy for a semester, etc. But, then you got your act together and excelled when it mattered most! This also looks better than those with a downward grade trend since your highest grades are most recent.

In the event that you have weak grades that never get better, you have a lot of explaining to do. Hopefully, you have an LSAT score that belies these grades! Or, perhaps you pursued a major that is known to be objectively difficult and preferably at a university that has a reputation for being exceptional in that field. Keep in mind that neither of these makes the transcript look better. After all, a low GPA is a low GPA. If someone comes along with a higher GPA in the same discipline, they are looked at much more favorably. It may, however, take some of the edge off. However, a weak GPA is never a good thing, no matter how many reasons you can point to for it. If law school is your eventual goal, then aim for a 3.5+. No real two ways about it.

If your grade trends are all over the place, you probably have it worse than any other trends we’re going over. If there is no true trend, it can be taken to be an unknown quantity. There’s no rhyme or reason for your performance—sometimes you do well, sometimes you don’t. Class types, subjects, times of the year; none of these seem to make any difference or create a pattern. Law schools might look at this grade trend and wonder which student they will get. If you fit in this category, especially if it’s in conjunction with a less-than-stellar GPA, address it in an addendum.

Ah, the great debate over class selection. Some say that it doesn’t matter which major or classes you take, as long as you get that coveted 4.0. Needless to say, I’m on the dissenting camp. I believe an “A” in Underwater Basket-weaving will not be considered the same as an “A” in Advanced Calculus. Call me old-fashioned, but I judge a person’s academic prowess and potential based on the difficulty of their courses. I’m willing to bet AdComs do the same. I’ll go further and says an “A” in Underwater Basket-weaving won’t hold a candle to a “B-” in Advanced Calculus.

There’s a lot of chatter about what constitutes a “good” major if you’re planning on going to law school. I’m of the opinion that any major that is reading-, research-, and writing-intensive is good, even if it’s not in the realm of the “traditional” law school majors (PoliSci, Econ, English, etc.). People with notoriously difficult majors (Chemistry, Physics, Biology, Math, Engineering, etc) will get a little more leniency if their grades aren’t stellar. Not only have professors in these disciplines been found to be tough graders, the subjects are also tough in and of themselves.

On the other hand, much like with class selection, those that take the painless way out major in the super-easy just for the sake of an easy “A” may also be looked upon not as favorably. Above all, law schools want to see that you can handle the rigor of law school classes, and that you are ready for the academic intensity that they will entail. Yes, your major should be interesting and easy for you to be engaged in–but it should also speak to your academic potential.

On the other hand, if you’re overall GPA is a good one, but your major GPA is poor, that may say that you lose interest in delving deeply in a subject, and that you do better when you have multiple subjects to choose from and study at once. While that might say wonderful things about your personality, it may make law schools a little leery–law school (any professional or graduate program, really) is about advanced study in a single field. If you haven’t shown that you can focus intensely on one subject and succeed in it, what will happen when you have to study nothing but law for three years?

I am a big believer in that your undergraduate institution really doesn’t hold that much weight (if any) during the law school admissions process. Don’t believe me? Check out Harvard Law’s list of undergraduate institutions represented during the 2010-2011 school year. It’s not just the Ivy League represented–there are plenty of state universities, small private colleges, and liberal arts institutions, too. Where you come from doesn’t matter as much as how you did when you were there. Instead of worrying about the relative “prestige” of your institution, worry about doing well in your classes while you’re there..

Some may say that taking the time to scrutinize your transcript like this borders on the obsessive and overly analytical. While I agree, to an extent, I also believe that knowing what all the different aspects of your application say about you is also incredibly beneficial. It is only by learning to listen to your application that you will be able to put together the most effective admissions package, and increase your overall chances of acceptance. Take the time to hear what your transcript (and all the other parts of your application) are saying, so that you can better harness their words.

Fill out an inquiry today to get started with an admissions consultant.