You are here: Home / Law School Admissions / Why is My LSAC GPA Different from My Transcript GPA? 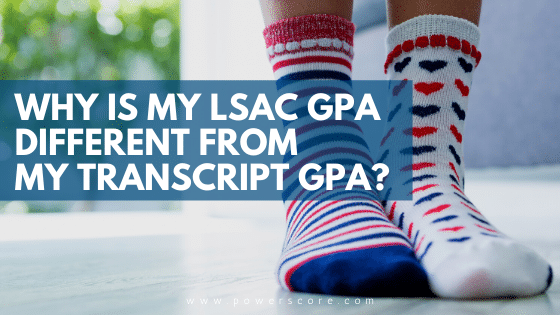 One of the steps to getting your law school applications ready is sending LSAC your college transcript(s) for processing. They take your transcripts, convert your grades to a 4.0 scale, and calculate an overall GPA for you. This is your “LSAC GPA”. To the surprise of some students, their LSAC GPA is different from their transcript GPA. Not necessarily in a good way, either. But, why is that the case?

With that being said, let’s examine the last part about the grades themselves not changing. This is why some students have a lower LSAC GPA than their transcripts. It’s not that LSAC changes your grades, it boils down to what LSAC chooses to add into your GPA that your school may not.

Any grade notation that signifies failure (such as No Credit, No Credit/Fail, Not Passing, Incomplete/Fail, Withdraw/Fail, Unsatisfactory, Fail, etc.) is converted to zero on the 4.0 scale and is included in the calculation of the GPA, even if the issuing school considers the grade to be nonpunitive. Failure is defined as credit attempted but not earned. […] Incomplete and Withdraw grades considered punitive by the issuing school will be included in the conversion. The only exception to this policy is for No Credit, Withdraw/Fail, repeated courses, and incomplete grades specifically explained in Grades Excluded From Conversion.

But, What Does That Mean?

So what does this mean in plain English? Even if your school doesn’t count a failing grade into your overall GPA, LSAC may count it as a 0.0. This is particularly relevant if you failed a class and repeated it to have the failing grade “replaced”. Unless the grade was completely taken off your record, LSAC will count it in their calculations. They count grades even if your school “removes” them from your transcript by striking them out. If the grade is there and the number of units you attempted or earned is next to it, LSAC includes it. These repeated/removed classes are what trips up students. Oftentimes, a school will “replace” a grade with the passing repeat-grade, but don’t remove the first attempt from the transcript. Technically, the school doesn’t count it, but if LSAC sees it, they do.

How Do You Know?

Be careful when considering courses you’ve withdrawn from! If your school considers the withdrawal non-punitive, then it won’t factor in your LSAC GPA. If they do consider it punitive, then LSAC sees it as a 0.0. The easiest ways to tell if it is punitive is if another letter accompanies a “W”:

This is according to the LSAC website, although it’s not always the case. We recommend contacting LSAC to get their take on your particular case.

Should You Worry About Your Transcript?

Unless you have a considerable number of punitive repeat/incomplete classes on your transcript, then the difference shouldn’t be significant. The vast majority of applicants don’t have this issue and if there is a difference, it’s often a tenth of a point or less. However, we understand that even a tenth of a point causes stress, particularly if you don’t know why it happened. That’s why it’s important to make sure to keep your nose clean during your academic career! Make an effort to be very aware of exactly what’s showing up on your transcript.

Before submitting your transcript to LSAC, order one for yourself and analyze it. Doing this offers the chance to avoid having a heart attack when you get your converted LSAC GPA! To read all of LSAC’s policies on grade conversion, go to the LSAC website. Of course, if you have any questions about how a certain grade may be converted in your transcript, contact LSAC. They’re the authorities and will give you the final word on how you can expect things to go.

Wondering what your transcript says about you to the law schools you’re applying to? Head on over to this post.