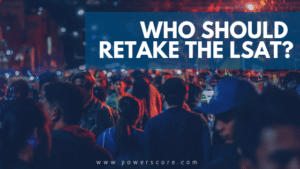 Whether or not you should retake the LSAT is one of the most common questions we receive. Students want to know if they should and how they should approach it differently for the retake. In this post, we will cover who should retake the LSAT and why. Already know you’re going for a retake? Check out this post on how to properly prepare for a retake. So... Who Should Retake the LSAT? There are several different scenarios that should almost automatically trigger a retake.You did worse than you had been practicing on the LSAT. Next time around you know you can prepare harder or better … END_OF_DOCUMENT_TOKEN_TO_BE_REPLACED

Have you ever wondered whether you should re-take the LSAT, and how many people actually do take the LSAT more than once? Well, even if you haven’t, we’re here to provide some insight into just how many people do take the LSAT multiple times.According to an LSAT Research Report covering the period of 2003 to 2010, the average percentage of first-time test takers was 75% during those seven years. So, on average, 3 out of every 4 test takers yearly are taking the LSAT for the first time. Thus, when you go to the test center for the first time, the majority of people around you are also there … END_OF_DOCUMENT_TOKEN_TO_BE_REPLACED