You are here: Home / Studying / Mountain Climbing for the LSAT 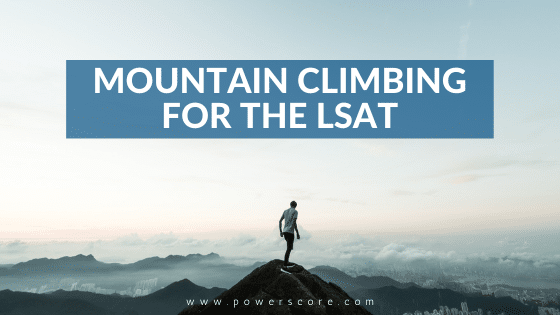 I have an admission to make: I don’t like heights. It’s not that I’m petrified of them or can’t deal with them, I just don’t like them very much and they make me a bit nervous. Somewhat perversely, I’ve become fascinated with mountain climbing and have read numerous books on climbing Everest and other peaks. So of course the following climbing article in the New York Times caught my eye: El Capitan, My El Capitan. The article details Alex Honnold’s extraordinary free solo of El Capitan in Yosemite National Park earlier this month, a feat previously thought impossible. As I read it, I couldn’t help but draw parallels to taking the LSAT.

What is Free Soloing?

If you aren’t familiar with climbing, a free solo is when a climber scales a mountain or route using no ropes or safety nets, or any protective gear at all. It is literally man vs mountain, and the risks are incredibly high because if you slip and fall, there’s no backup. The result of a mistake is usually death. The article is well worth your time to read, but I’ll excerpt some of the relevant sections for our discussion.

It Was Thought Impossible

What Honnold did was previously considered nearly impossible: “The world’s finest climbers have long mused about the possibility of a ropeless “free solo” ascent of El Capitan in much the same spirit that science fiction buffs muse about faster-than-light-speed travel — as a daydream safely beyond human possibility.” When it was finally accomplished, the author of the article noted that, “Honnold’s successful climb was easily the most significant event in the sport in…38 years. I believe that it should also be celebrated as one of the great athletic feats of any kind, ever” (italics added for emphasis).

How Did He Do It?

How did he achieve this monumental feat? First, he prepared relentlessly:

“Honnold rehearses big free-solos on rope first. He commutes up and down cliffs with gear in order to work for entire days on small tricky sections. He memorizes long sequences of complex movement like a clever middle-schooler memorizing Pi to a hundred decimal places…In the final weeks, Honnold told me, he climbed a particularly smooth stretch about 500 feet up, on rope, five times in a row with only his feet, no hands.”

Aside from the sheer insanity of that last sentence (he climbed the same section 5 times with no hands? WTF), what comes through is a picture of relentless drive and demand for perfection. That’s easy to understand when the consequence of an error is a long fall to your death, but even for a test like the LSAT, the consequence of a poor performance is usually a change in your potential outcomes, which redirects the pathways of your life. While the immediacy and finality isn’t the same, the point is that single-minded obsession with conquering your goal combined with repeated practice and preparation will result in optimal performance.

When you are sitting there on a Tuesday night and thinking about taking a practice section vs watching YouTube or playing a video game, try to look at the LSAT like it will have a major impact on your life (because it will). If you were climbing El Capitan you’d surely choose to practice that instead of playing more Fortnite or another FIFA match, so treat the LSAT in the same way. Also inherent in that idea is that you need to practice the same games or passages or LR questions repeatedly, not just once. Make sure you know exactly what you should’ve done the first time.

Second, he controlled his fear. As world class climber Jimmy Chin said, Honnold “has this capacity to compartmentalize fear, to rationalize it. His brain is so powerful that if a thought or feeling is not serving him he can put it away.” That last thought really struck me as relevant to high-stakes testing like the LSAT: if the thought isn’t helping, he puts it away. He doesn’t fight it, he doesn’t push it down, he simply removes it from the process and focuses on the task at hand. Alabama football coach Nick Saban talks about a similar idea:

“If I put a 2-by-4 on the ground and asked you to walk across it, how many of you guys could do that? You could all do it, because you’d focus on the board. But what if I took the same 2-by-4 and it put it 10 stories up, stretched between 2 buildings? Then it’s hard to focus on the board, because you’re focused on your fear of falling. Focus on your goals. Don’t blet your fears distract you. Concentrate on the 2-by-4 and we’ll get it done.”

Take a moment to really think about that quote for a moment. It’s powerful.

Find Your Own Path

Now, everyone has had the feeling of fighting their brain. It might be a song you can’t get out of your head, or even struggling to fall asleep the night before a big game or exam. But the fact that you can’t always control your thoughts doesn’t mean you can’t practice doing so. Alex Honnold uses single-minded focus on the task at hand whereas Nick Saban talks about focusing on the task, not the consequences.

Whichever way works for you (and they are both attacking the same problem), practice focusing and practice ignoring unhelpful thoughts. This is one of the key benefits to taking practice tests: you have the opportunity to put yourself on the spot again and again, which allows you to become comfortable in the pressure zone. And reviewing your entire performance is also key, since you can go back and see what you did wrong (or inefficiently) and why. And then correct it.

How Does This Apply to the LSAT?

Sure, the death-defying exploits of a free soloist climbing a mountain aren’t identical to you taking the LSAT, but that is beside the point. Watching other people accomplish incredible things is both inspirational and instructive, and you can take lessons from how they approach and achieve their feats. This particular accomplishment will garner less attention than the Warriors recent title or the Patriots crazy comeback win over the Falcons in the Super Bowl, but it may well be far more useful for those of us taking the LSAT.

Final amazing fact: it took Honnold only 3 hours and 56 minutes to free solo the approximately 3000 feet of El Capitan.

Update: In a very cool development, there is now film a film about Honnold’s climb: Free Solo. Note, this has nothing to do with Star Wars 🙂  It’s rather incredible and vertigo-inducing, and here’s a preview of the film: What if He Falls? The Terrifying Reality Behind filming “Free Solo.”

Update 2: In another awesome development, Free Solo has won the Academy Award for Best Documentary Feature. Check it out on Disney+ if haven’t already! Have a question or comment? Please post it below!