You are here: Home / LSAT Prep / How Hard is the LSAT? 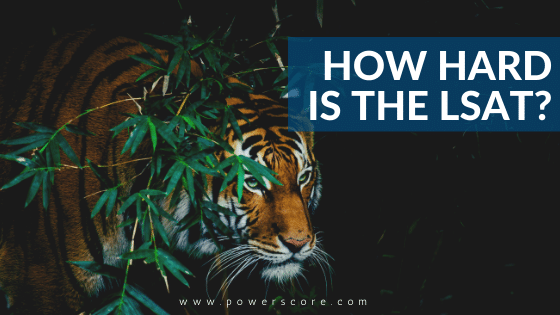 One of the most frequently asked questions we receive is, “How hard is the LSAT?” Most students have heard the test is difficult, but unless they’ve taken an LSAT already, they don’t have a good idea of whether the test really is hard, or whether it’s just like any other college test. Let’s take a look at some numbers and see what the real story is here.

First, we have to understand the scores that are produced by the test, because those scores help us measure difficulty. Our LSAT Scoring Scale discussion explains how the 120 to 180 scoring scale works. The key discussion points relate to how many questions you can miss to achieve certain scores, as well as what percentile is represented by each score.

With the LSAT, the percentile for a 180 is 99.97%. Thus, in numerical terms, if you have a 180, then in a room of 10,000 people you have one of the three highest scores. With roughly 100,000 LSATs administered in the past year, that would suggest that about 30 people received a perfect score. When only 30 people achieve this score out of 100,000 test takers, the inference is that this is a very, very difficult exam!

Achieving a 180 is also interesting in that to do so does not require perfection. That is, you don’t have to answer all of the questions correctly in order to receive a 180. This page contains a brief overview of scoring scales for the LSATs from June 2005 to the present. It demonstrates that to get a 180, you can, on average, miss around 2 to 3 questions per test. To produce a 3-in-10,000 score, you don’t have to be perfect; you can miss a few questions and still make it happen.

Next, let’s focus on a score of 170, which is a highly desirable LSAT score. It’s a score that almost every LSAT taker would be thrilled to receive. A 170 represents a percentile of 97.4%. This means that test takers with a score of 170 have a score higher than 97.4% of all LSAT takers. That’s pretty good! But what does it take to achieve that score?

On the September 2018 LSAT, you would have to answer at least 89 of 101 questions to receive a 170. In other words, you can miss 12 questions, and still be above 97.4% of testers. Alternately, you can miss 11.88% of the questions but still be in the top 2.5% of scores. Considered alone, this suggests you have some latitude in missing LSAT questions while still achieving a high score. That by itself is a sign of the difficulty of the test. To bring the point home, let’s compare it to a grading scale you’re probably familiar with: scales used in college.

At most colleges, getting 89 out of 100 on a test, means you’d be looking at a B+ or B. That’s certainly a solid grade, but it isn’t one that is considered outstanding or highly desirable. In contrast, getting 89 right on the LSAT results in a score that is considered highly desirable. This too indicates that the LSAT is, in general, a very difficult test.

The final piece of evidence regarding test difficulty relates to the guessing policy enforced by LSAC. Unlike many other standardized tests, there is no guessing penalty on the LSAT. In fact, we strongly encourage you to guess on questions you cannot finish. There’s no penalty for missing a question; if you guess correctly, you receive full credit. Think about that for a second, because what it suggests is that this test is so hard that the test makers don’t even care if you guess; they don’t think it will materially change your score! Their view is that even someone who performs extremely well on the questions they do answer will still not be able to blindly guess their way to a very different score.

The conclusion in all of this is that yes indeed, the LSAT is a very hard test. From any objective measure, it’s a challenge to score well on this exam. But there is good news here because in difficulty lies opportunity! The LSAT is a learnable test, and you can improve your performance by studying and preparing properly. Why is that? Because this is a standardized test, and you can learn about the standards and protocols used in the making of the test. The LSAT will always be difficult, but you can improve, and each point you move up takes you above more and more of your fellow test takers. And you don’t have to be anywhere near perfect to do very well.