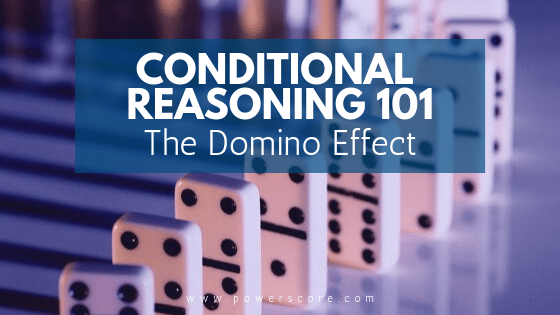 In a previous blog post, I talk about the basics of conditional reasoning on the LSAT. It deals with fairly simple statements involving a single sufficient condition and a single necessary condition. Though, on the LSAT, things are not always that simple! Sometimes, you will encounter conditional chains. This is where one thing is sufficient for another, which is sufficient for a third, which is sufficient for a fourth. Stringing these conditional claims together in the right order and knowing which conditions affect others and in what ways, will be crucial to your success. You will encounter chains in Must Be True questions, Parallel Reasoning, Parallel Flaw, Justify the Conclusion, and others. So, how do you manage to interpret the relationships correctly? By playing with dominoes!

The Nature of Dominoes

You have probably seen a video of someone who has lined up a bunch of dominoes all standing on their ends next to each other in a line. They knock down the first domino, which knocks down the next one in line, and so on until they have all fallen down. Some of these can get pretty complex and can be very entertaining. In fact, if you need a break from your studies, take a minute to run a search online for “falling dominoes!” See what fun videos pop up to distract you and give your brain some time to rest and recuperate from all the damage you’ve been inflicting on it.

We aren’t going to get that crazy here. Instead, we are going to imagine a straight line of dominoes that looks a little like this:

If I knock that first domino down so that it falls to the right, what happens? It hits the next one in line, which falls to the right and hits the next one in line. You get the idea. Now, imagine I don’t touch that first domino, but instead, I knock the second one down so that it falls to the right. Each domino after it will fall, but what will happen to the first one that I skipped over? Nothing! It is unaffected by the others falling. The second one’s fall to the right literally did not impact the first one in line, so it remains standing. A standing domino has the potential to fall to the right, or to the left, or to just keep standing, but we can’t predict which it will ultimately do. Conditional reasoning chains happen the same way.

Imagine this stimulus on an LSAT Logical Reasoning question:

You would diagram this conditional chain this way:

What happens when A occurs? That first condition, A, “falls” to the right, like a domino. That means it impacts B, which then falls to the right, impacting C , etc. This goes all the way to the end of the chain. The first thing in the chain is sufficient for everything that comes after it. Each thing after the first is necessary in relation to what came before it and sufficient for everything that comes after it.

What if I buy some chocolate? Then C happens, which is sufficient to prove that it’s dark chocolate, which is sufficient to prove that I eat it right away. But what about apples and bananas? What’s going on with them in this case? Like the dominoes, A and B, being to the left of C, are not impacted. They remain standing, representing only potential! I could buy a banana, and I could buy an apple, but I don’t have to. I just can’t know anything about them because buying chocolate was not sufficient to tell me anything about apples and bananas, but only necessary if I did buy them.

Have fun playing with dominoes! If you want to continue with some Conditional Reasoning 101, check out these blogs: