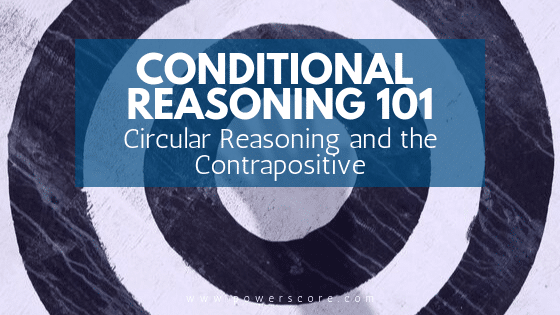 Contrapositive vs. the Logical Flaw

The question is from the October 1992 LSAT, Logical Reasoning section 2, #8. It also appears in PrepTest 8, LR Question Type Training in the Flaw section, and our LSAT courses. Due to LSAC copyright restrictions, we can’t reproduce LSAT questions in their entirety for public use. So instead, I’ll use a different example that contains the same type of mistake.

First, quickly let’s re-examine what a basic contrapositive looks like. In conditional reasoning, somewhere in the argument, a conditional statement will appear, such as the following:

That statement is then combined with another premise, one that negates the necessary condition:

Premise: John did not study for the LSAT.

When those two premises are combined, we can conclude that the sufficient condition did not occur:

Conclusion: Therefore, John will not get a 180 on the LSAT.

Note that it is the combination of the two premises that allows you to draw the conclusion. “J” indicates that the conditions involve”John”. In diagram form, the entire argument appears as:

The example above is a form of valid reasoning. The two premises combine to yield a supported conclusion. Now let’s look at the insidious reworking of this relationship. Let’s start with an example that uses some of the ideas in the first example above:

When discussing the law school application process, Professor Zorak concluded that to get a 180 on the LSAT, one must study. Several students countered that they knew a student who hadn’t studied but still did very well on the LSAT. Professor Zorak remarked that his principle was still valid, because if you do not study for the LSAT then you cannot get a 180.

Is this Valid Reasoning?

So, is this valid reasoning on the part of Professor Zorak? Many students say yes, that Professor Zorak simply uses a contrapositive to supports his position. But, that’s not the case. Instead, this is Circular Reasoning because the good professor repeats his premise as his conclusion. Let’s look at it more closely:

At first glance, this may look basically the same as the first example above. Look more closely and don’t worry about the order of the items as that is irrelevant. In the first example, two separate, distinct premises create a conclusion that is different from either premise. In the second example, a restatement of that conclusion in full contrapositive form supports the conclusion. Because a statement and its contrapositive are functionally identical, in the second example the premise and conclusion are identical in meaning. Well, one form of Circular Reasoning is when the premise and conclusion have the same meaning. So, in our second example, we aren’t looking at valid conditional reasoning, we are looking at a flawed argument in the form of Circular Reasoning.

You can see how tricky this type of question could be to the unwary test taker. This is especially so when you think about how often someone “takes the contrapositive” as a matter of course, such as in LG with a game rule. But, in all those cases, what the test taker is doing is looking at the original statement or rule and then positing what occurs if the necessary condition does not occur. If that two-premise framework in the first example above is broken, then you may instead be looking at a circular argument. As a note, you don’t need to worry about this in Logic Games. It’s primarily Logical Reasoning where this would occur, typically in a Flaw in the Reasoning or Parallel Flaw question.

If you want to continue with some Conditional Reasoning 101, check out these blogs: