You are here: Home / LSAT Prep / How is Everyone Else Preparing for the LSAT? 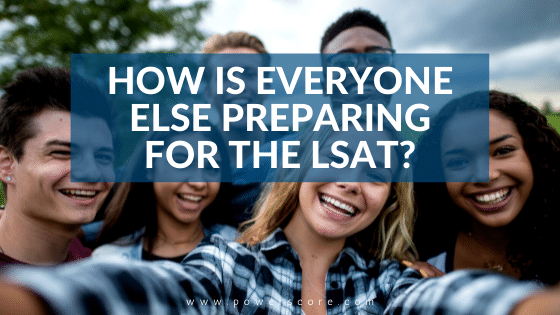 Do you ever wonder? Almost everyone does, but shouldn’t, and here’s why. First of all, how others prepare for the LSAT isn’t a big deal because it doesn’t directly impact you. Second, it really doesn’t matter because no one else will be taking the exam for you. That is, unless you bribed someone to take your exam, in which case you’ve got way bigger problems heading your way than choosing a prep method!

How to Study for the LSAT

Fortunately, instead of just guessing about what other people do, we can get a good general sense from the test-makers themselves. LSAC’s The Summary of Self-Reported Methods of Test Preparation by LSAT Takers is a fascinating read (if you are into these sort of things, and we are). For example, did you know that:

What Do the Results Mean?

The results of the survey are indeed quite telling. We take a lot of credit for creating powerful and comprehensive LSAT self-study methods. Our Bibles and other materials have been best-sellers for years (check out our free study plans and test scoring too). Second, it is clear that using licensed LSAT questions correlates with better-than-average performance. This is old news to us. We were early advocates of using licensed LSAT questions in our courses, and—despite the required licensing fees—continue to do so to this very day. Third, test prep courses run by undergraduate institutions usually lack the content, rigor, and expertise generally associated with more established test-prep companies. That might explain why those who utilize the former tend to underperform on the test.

But here’s a caveat that PowerScore students are taught from Day 1. Correlation implies but does not prove causation. The observation that those who reported using a particular test preparation method obtained higher LSAT scores than those who reported not using that method does not imply that the method alone resulted in their higher score. For instance, just because respondents who use LSAC-published materials have higher average scores does not mean that LSAC-published materials are necessarily more effective. It is just as likely that these students would have performed better regardless of the method of preparation they chose. In order to attribute any LSAT score advantages to a particular method, an experiment would have to be designed wherein test takers are assigned at random to different test-preparation methods. That would be just… cruel.

So, what should you do to maximize your chances of getting a high LSAT score? The best answer is not to worry about how other people prepared. Instead, choose the method that best suits YOUR study habits and individual strengths and weaknesses. Did your best friend use a tutor? Great, hopefully that worked for them. But it does not necessarily mean that it’s the right choice for you.

Test prep is never cheap, but there is no evidence to back the claim that spending exorbitant amounts of money on tutoring will give you the highest possible return on investment. For some people it does, but you need to figure out what works best for YOU. So, think carefully about how you like to study. How much time can you devote to it? And how much you need to increase your score? As long as the methodology you learn is conceptually robust, logically sound, and refined through years of experience and research, the sky is the limit.