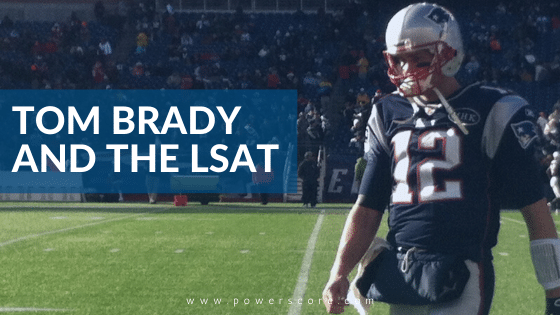 Over in our free LSAT Discussion Forum, I’ve been trading messages with one of our students that is working towards a 170. He started at 143, and has increased his score over 20 points already. But, he was running into a few issues with confidence and having the words of others affect his perception of how he will perform. I won’t recount what I’ve said to him publicly because it’s right there on the forum. But I have also been chatting with him privately. I mentioned an example to him that I felt was worth sharing with everyone. As you have no doubt guessed from the title of this post, it centers on Tom Brady, the quarterback of the Tampa Bay Buccaneers.

First, let me say that I’m not a Patriots or Bucs fan, so this isn’t some Patriots/Bucs love fest (I’m a Vikings fan). Second, whether or not you are a sports fan, this article will still be of value to you. You don’t need to like football or know much about it to understand the message.

The first fact relates to Brady’s confidence in himself. He came out of college as a 6th round draft choice in the NFL. As a reference, there are only 7 rounds in each draft. And in each round typically every team has a single choice. So, Tom Brady wasn’t among the highest picks in the draft that year (2000), and overall he was the 199th pick. He certainly wasn’t the first quarterback taken that year; he was the 7th QB picked in a year considered very weak at the quarterback position. The QBs selected ahead of Brady were: Chad Pennington, Giovanni Carmazzi, Chris Redman, Tee Martin, Marc Bulger, and Spergon Wynn. You might think that this would have dented his self-confidence, but you couldn’t be further from the truth.

Here’s a story told by Robert Kraft, the owner of the Patriots. During the pre-season camp in 2000 while Brady was a rookie at the bottom of the depth chart for QBs, he ran into the owner. Brady said to him, “We’ve never met, but I’m Tom Brady.” Kraft replied, “I know who you are, you’re the quarterback from Michigan. You were our sixth-round draft choice.” Brady said, “Yes, and I’m the best decision this organization has ever made.”

Another interesting point about Tom Brady relates to other people’s initial perception of him. While in college at Michigan, he was reasonably successful. But clearly not so successful that the NFL was frothing at the mouth to draft him. In fact, the general perception given his 6th round draft position was that at best he was going to be a career backup. Football experts didn’t really think he was anything special. If Brady had listened to them, it would have affected his self-belief and then ultimately his actual performance.

And this brings me to my second point: what other people think of you doesn’t matter. What matters is what you actually go out and do. In Brady’s case, he ignored the perceptions of others, and he went out set the football world on fire. I also think this occurred in part due to his famous competitiveness, which is another useful trait for LSAT success. And, ultimately, the opinions of the experts didn’t matter because they weren’t on the field; he was.

In the case of Thomas, our LSAT student, he was having some troubles shaking off the comments and views of others. This is understandable—it’s hard to ignore other people telling you that you can’t do something. But, as he and I discussed, the people telling him he couldn’t do it weren’t going to be taking the test for him. He was taking the test, and whatever they thought was irrelevant to his actions.

The point I relayed to him was that, if 20 years ago you asked a panel of NFL experts whether a 6th round draft choice was going to become one of the greatest quarterbacks in NFL history, they would have uniformly said no, it was extremely unlikely. Yet, that very thing happened. In Thomas’ case, he’s already done something that most people didn’t think he could do. So what was stopping him from going just a little bit further?

In your life, you’ll always have someone telling you that you can’t do something or that you don’t have the ability. Screw those people. They aren’t the ones taking the LSAT for you or living your life. The only limitations you have are the ones you impose upon yourself. So ignore the negative things people say. Focus on working hard towards your goal, and maintain a steadfast confidence and belief that you can do it. By doing so you will increase your chances of success, and actually make it more likely to happen.