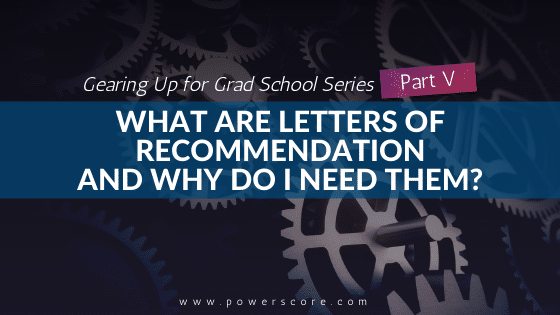 Applying to grad school can feel like a maze of requesting documents, taking tests, and writing essays. How do you make sense of it all, and be successful in your quest for admission to a graduate program? We’re breaking down the grad school application process, step by step and in this round, we’re tackling letters of recommendation! What they are, who should write them, and what they should talk about.

The Importance of Letters of Recommendation

Letters of recommendation deserve just as much attention as any other part of your application, for two very important reasons: They come from an outside perspective and speak about you in the third person. This gives them more weight. Letters of recommendation allow admissions officers to corroborate your academic story, be appraised of any personality traits you may not have mentioned throughout the rest of your application, and learn of any other qualifications (positive or negative) that you may bring to the table.

However, because recommendation letters (and recommenders) are also almost completely out of your control, you need to be aware of exactly what you can control, and how you can control it best.

Try to start cultivating potential recommenders as early in your academic career as possible, even as early as your freshman or sophomore year of college. As a general rule, the longer the student-teacher relationship, the better the letter. The most important part of a recommendation letter is not all the positive words that can be crammed into it, but how telling and sincere a letter is, and how much it rings like a personal account of the applicant–and this can only be achieved if the relationship between the student and the teacher is lengthy. Very rarely can applicants who have had only a semester’s worth of interaction with their recommenders obtain truly influential recommendation letters from them.

The best recommendations tend to have the following traits:

How to Choose Your Recommenders

Knowing what makes a great letter is definitely useful, but where most students trip up is in choosing their recommender. After all, everyone knows that the best letters are long letters that say nice things, but how do we choose the people who will write those nice, lengthy letters?

Qualities to Look For in Recommenders

Who would have thought that a single letter would require so much thought? It just goes to show that no part of your grad school application should be taken for granted. Take the time to choose your recommenders carefully and help them craft a stellar letter. You’ll reap the rewards in the long run.