You are here: Home / Law School Admissions / What Should I Do While I Wait for My LSAT Scores to Be Released? 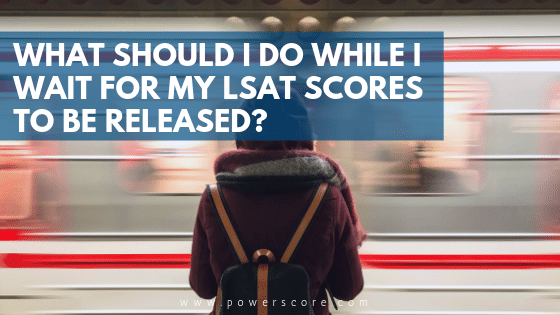 So you’re in the wake of taking your LSAT. No doubt the days following it’s completion has been an unrelenting stew of emotion. Relief to be through it, anxiety about how you performed, and sleepless nights waiting on the release of your LSAT scores.

For many—and fingers crossed you’re among them—the LSAT is a memory. Prep books and course materials can be discarded as you see fit. For others and perhaps yourself, things didn’t go as well as hoped and it’s clear a retake is in your future. But what if you’re on the fence? What should you do if your retake is score-dependent and you have some time without the information you need to make your decision?

Limbo is no fun, but it doesn’t have to be squandered. Here’s some advice on how to best spend that time.

First, don’t waste it! Hopefully that goes without saying.  Even if the LSAT is the final piece of your admissions puzzle, it is the biggest piece of that puzzle. You may still need to consider improving it. Every day counts! It’s better to stay sharp while waiting on your score, than realize you could have used this time to study. If you think a repeat may be in your future keep prepping!

Of course, be smart about it. Weigh the likelihood of a repeat and base your efforts on that. If you feel you’ve likely reached your goal and the odds of a retake are remote, take it easy!

Maybe spend a few hours a day or less, a practice test this week, a chapter or lesson here and there. The idea isn’t to maintain the intensity you’re hopefully accustomed to. Although, as soon as you know you’re on for the next LSAT get back to it! But, rather, to ensure that you don’t lose your edge or allow your skills to fade too much. You should know at this point what it was about the LSAT that’s left you uncertain. Make those concepts and issues your focus and take steps to continue chipping away at them.

Similarly, barring a miracle that may save you, if a retake is in the cards then push yourself a little harder. Of course, if the miracle happens and you find out a few more days of hard work weren’t needed… that’s a bummer. I assure you the joy of being done will overshadow the “wasted” time* so much so that you won’t care. More realistically, you know you’re still short of where you want to be. In a few short months, you’re going to try again. You’ve got more work to do, why wait?

Get Your Application Ducks in a Row

Now, so far I’ve been pretty LSAT-centric. No surprise there. My focus has been on people for whom the LSAT is the primary concern. If that’s not the case and you have a completed application that’s ready to go once your scores are in, you’ve got more than just the test on your plate. In this case, use the coming weeks to get the other pieces of your apps in order. Write and rewrite that personal statement until it’s perfect. Go find professors or colleagues who can give you killer recommendations. Check off every requirement box for law schools: transcripts, additional essays, resumes. Every facet should be neatly tucked away, ready for submission as soon as your score is in-hand. Don’t ignore your continued test prep, complement it with steady forays into non-LSAT admissions efforts.

Did You Do Your Absolute Best?

Finally, let me wrap this up with a point to consider after you’ve received your score. After you’ve received a desired score, that is. The last thing anyone wants to think about is taking the test again once they’ve hit their target. That’s the whole point of this process, right? But here’s the truth: you probably still have room to improve. There are probably some points, some readily-attainable points, left on the table. The next two tests are your chance to go get them.

Look, it used to be the case that rolling admissions was punishing. Enough so that unless you were going to improve at least 2-3 on each successive LSAT it probably wasn’t worth it. Instead, you were better off trying to get your applications in early.

But two things are now in play.

Statistically speaking, unless you’re into the mid-to-high 170s, or you do next to nothing prep-wise, you’ll likely score higher. Weigh the pain of more prep against the possibility of more points and see where you come out.

If you’ve taken a PowerScore LSAT Course there’s more good news. You have access to everything from your course for 120 days following the start date of your course. All materials, archives and virtual modules, practice tests and scoring, Online Student Center, forum, and this blog are right there! As dreadful as it may be to consider, there’s a lot to be said for giving it another shot.

I hope your score is everything you wanted! Hopefully the only thing left for you to do is wait for the acceptance letters to roll in. But if your journey’s not yet over or if you realize a little more work may take you further than you imagined, make the most of your time. Take actions to ensure your next attempt exceeds your wildest expectations!

*Keep in mind why law schools care so much about the LSAT in the first place. They believe it’s a solid measure of your ability to succeed in law school, and there are mountains of evidence to back that belief up. Thinking that time spent improving on the LSAT is time wasted ignores a central truth. Becoming better at this test means crafting skills that will serve you well in law school and beyond. Even if the LSAT is behind you, the tools you used to beat it are still critically important.