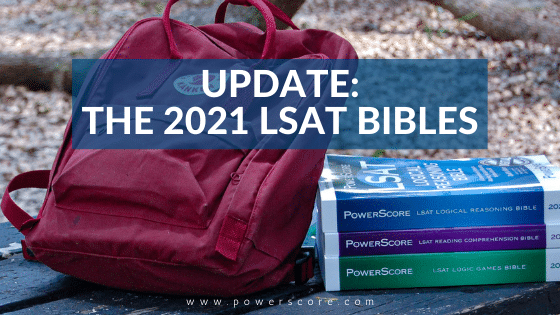 One of the most common questions I receive right now is: when are the 2021 LSAT Bibles coming out? Usually the answer is an easy one, and by January they are typically out. But 2020 was obviously one of the strangest years in history. And so the answer this year isn’t as easy as usual.

The LSAT Bibles Usually Come Out in the Fall

I typically make changes to the books in the fall of each year, after I wait to see what has happened with the LSATs of that year. After making a thorough analysis of the released LSATs, I can then make updates to the text, and add new sections as needed. The new editions are sent to the printer, typically appearing in December of each year.

But this year, things were different. When the pandemic disrupted the LSAT test schedule, LSAC moved to the Flex format. And when they did so, they changed all released LSATs to nondisclosed LSAT. So, for the majority of the year, we had no new LSATs to evaluate. LSAC did eventually release parts of the May 2020 exam, but that’s not much to base changes on.

Additionally, the tests that were given and nondisclosed were not notable. As we had been predicting for months on our LSAT podcast and in our Crystal Ball webinars, we expected the Flex LSATs to be largely middle-of-the road affairs and they were. And so the source material that I usually use to make changes to the books does not exist this year.

Each yearly edition is produced because I think there are reasons to make those changes. And indeed, over the years the books have grown tremendously as I’ve added content. For example, the original Logic Games Bible was 232 pages, and the most recent edition is 746 pages!

But this year the need for change is less than in prior years. Given that we haven’t had much in the way of released LSAT sections or notable test content developments, I see no reason to radically or significantly change the books right now. I usually change them in order to adjust to changes in the test, but we aren’t seeing any of those right now. So, the changes I have made are very minor changes.

We did reprint the LSAT Bibles here in February 2021 as we regularly replenish our supplies, and we have updated the medallions, to say 2020/2021 Current Edition. these are the most current editions.

What About the Flex? Will You Make a Special Flex Edition of the LSAT Bibles?

Note: the following was written prior to LSAC’s announcement of adding a fourth section to the LSAT. I thought about this for a while, and decided not to. The Flex is a special, limited edition of the LSAT. It uses the same sections as the regular LSAT, and the questions are the same as well. The big differences are that it has one less section of Logical Reasoning, no Experimental, and you take it at home. Since the actual test content is still based on the same three section types and we know the Flex will disappear at some point, I don’t see the need to make changes since the current 2020 books are 100% applicable to the Flex questions. If they keep the Flex indefinitely then I’ll make changes, but it’s too soon to know that right now.

Update, post-LSAC announcement: Later in 2021 we will release updated versions of the LSAT Bibles to address the re-inclusion of the Experimental, and the adjusted test format of only three scored section.

The “2020/2021 Current Edition” LSAT Bibles are the current version. The next content update until Fall 2021, and that will be for the 2022 LSAT Bibles. If you have any questions or comments, please let me know below!