You are here: Home / Studying / The Secrets of Mindfulness Meditation (Your Local Monk Never Told You About) 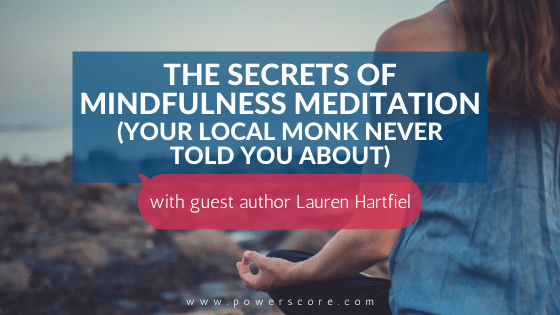 This blog is brought to you by a special guest, Lauren Hartfiel.

This post is about mindfulness meditation: what it is, how to do it, and its scientifically-proven benefits that may help improve your LSAT performance. Buddhist monks have used mindfulness meditation for over 2,600 years in an effort to achieve self-enlightenment. However, in the past few decades scientific research has shown that its beneficial effects go beyond spiritual progression. Most current scientific research is based on the practice of secular meditation, which is our focus here in regard to LSAT preparation and performance.

As discussed previously on this blog, the brain, like any muscle, is a transformable organ. This is called neuroplasticity. And mindfulness meditation is an exercise for your brain that research shows can reduce stress and anxiety, increase attention span, and improve working memory, the ability to use stored information to efficiently reason and make decisions—all of which are directly and profoundly applicable to standardized testing!

One study from UC Santa Barbara showed that a two-week course in mindfulness—including 8, 45-minute classes where participants performed up to 20 minutes of mindfulness practice (and additional 10-minute daily meditations on their own)—led to an improvement of approximately 16% in GRE Reading Comprehension scores by enhancing concentration and dampening distracting thoughts.

That’s a remarkable increase, attained not through intensive RC prep, but merely by incorporating meditation into their routines!

I cannot promise you that you will significantly raise your LSAT score with nothing more than two weeks of mindfulness practice. But it’s clear that even a short span of daily practice can be beneficial. If you continue practicing, over time you may not only transform your brain but your entire body and life perspective. According to a 2013 study from Yale University, meditators are more likely to report “undistracted awareness” and “effortless doing.” Other well-designed scientific studies have shown mindfulness meditation can benefit anxiety, depression, and chronic pain, while some research indicates possible benefits for conditions such as irritable bowel syndrome, fibromyalgia, psoriasis, and post-traumatic stress disorder.

Researchers Daniel Goleman and Richie Davidson, in their book Altered Traits, state that mindfulness meditation “lets us be fully responsive to a challenge as it happens, without letting our emotional reactions interfere before or afterward, when they are no longer useful.” This is the ideal mental state for an LSAT taker. If you watched our test mentality webinar, you may remember that Michael Jordan said he never worried about the consequences of taking a critical shot—that is mindfulness! Just think of all the time and energy you spend ruminating about past performances and future scores. Time spent worrying about what you cannot control. Then think about the potential of that time and energy being returned to you in the form of thoughtful awareness. The ability to study and take tests more efficiently is pretty enticing!

What is Mindfulness Meditation

So, on the assumption that I’ve sold you on its potential benefits…what exactly is mindfulness meditation?

The most widely used definition of mindfulness is attributed to expert Jon Kabat-Zinn as “[t]he awareness that emerges through paying attention on purpose, in the present moment, and nonjudgmentally to the unfolding experience.” Meditation is a way to train the mind by practicing this state of present awareness, also called interoception, so that you experience it not just during meditation but throughout your daily life, including during the LSAT. It could be described as “hygiene for the mind.”

The first step is to pick a time during the day when you will not be disturbed. For many, this is either first thing in the morning or right before bed. Next, pick a place where you will not likely be interrupted. Any place where you can be in a comfortable position for an extended period will do. Most practices promote sitting upright in a chair or cross-legged on the floor. But meditation can be done while standing, lying down, and even walking (be careful with this one).

Some practitioners—myself included—fall asleep while meditating lying in bed at night. But this can be a beneficial way to start, especially if you are having trouble sleeping due to anxiety. Lying down also offers extra back support. I still meditate lying down both at night and in the morning. In the morning I use a yoga mat on the floor and do not have trouble staying awake. The most important part of the practice is that you are comfortable enough to keep from fidgeting. Meditating at the same time and place every day helps to reinforce the habit. But if that is not possible or is just not happening, don’t give up; practice when and where you can.

Mindfulness meditation practice can be either guided or unguided. However, a 2014 study found that most people would rather “administer electric shocks to themselves” than be alone with their thoughts for 6 to 15 minutes. For this reason, I suggest beginning with guided meditations. A few basic ones can be found here, and there are apps like Headspace that have hundreds of sessions to choose from. You can also search “guided meditation” on YouTube for even more options.

Try beginning with a short, guided practice, and aim toward longer, unguided sessions. Some common forms of guided mindfulness meditation involve focus on the breath or progressive relaxation techniques. There are also guided meditations that deal with specific issues. Here are two of my favorites from YouTube: Detachment From Over-Thinking and Clearing Subconsciousness Negativity, both narrated by Michael Sealy. He also has a 20-minute mindfulness practice, which I think is a good place to start. If you don’t like the first meditation you try, don’t worry! There are many to choose from.

Don’t be discouraged if your mind begins to wander during your meditation sessions. You are not failing at meditating; this is natural and should be observed without judgment while gently bringing your focus back to the present moment. Meditation is deceptively simple. But with our hectic, multi-tasking lives, our brains are trained to function in a state opposite to mindfulness. It takes practice to retrain your brain to be present and singularly focused for extended periods of time.

Anytime, Anywhere, Including the LSAT!

You can actually practice mindfulness meditation anywhere, anytime—even during the LSAT!

Just bring your focus to your breath, and pay attention to the physical sensations in your body. One study showed that just 8 minutes of mindfulness practice (easily done before the test or during the break) improves concentration and mind-wandering. What should you do if you are mid-section and begin to panic or feel distracted? Just pausing for a few moments and taking 5 to 10 deep, controlled breaths can help clear your mind and get rid of any detrimental anxiety and unwanted sensations.

Long-term meditation has been shown to change the brain’s grey matter and regions linked to memory, sense of self, and regulation of emotions. However, I find the research on gamma brainwaves to be the most interesting aspect of long-term practice. Gamma are the highest frequency of brainwaves on the EEG spectrum. A typical person experiences split-second periods of gamma waves at certain times. An example is when they solve a difficult problem or puzzle. However, laboratory testing of “Olympic-level” meditators—those who have done up to 62,000 hours of life-time practice—shows that their brains produce gamma waves all the time, as an enduring change to their brain functioning, and their gamma levels jump 700–800% when asked to intentionally meditate on something like compassion! These meditators have described the experience as “spacious” and “wide-open,” “prepared for whatever may come.”

So, if you have test anxiety, experience bouts of mind-wandering while studying for or taking the LSAT, or simply have trouble getting to sleep at night, try some mindfulness meditation. It just might be the secret to your ultimate success on the LSAT and beyond.