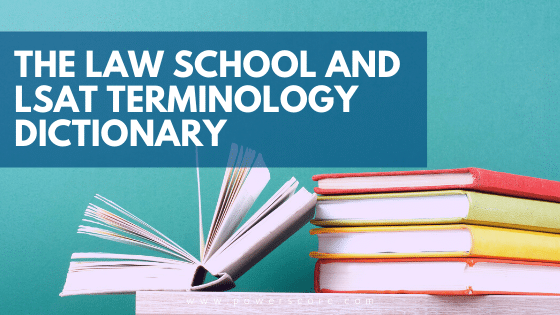 Students preparing for the LSAT and applying to law school invariably come across a slew of unfamiliar terms and acronyms. If you aren’t familiar with this special language and the resulting acronym soup, navigating the admissions process can be difficult. Below, we define these terms.

0L: This term is often used for pre-law or non-law students.

25th/75th: These are the GPA and LSAT percentiles reported by law schools to the ABA, when combined with the GPA/LSAT medians, these numbers provide a snapshot view of the types of applicants a school tends to accept. the 25th/75th numbers are often used when identifying Splitters.

509s: In accordance with ABA Standard 509, each law school must release a yearly report providing information about the school, classes, class sizes, faculty, students admitted, transfers, tuition, and grants and scholarships. Standard 509 Reports can be extremely helpful in understanding the basics of how a school operates, especially from an admissions standpoint.

ABA: American Bar Association. This organization credentials lawyers and accredits law schools. Attending an ABA-approved law school allows you sit for the Bar in any state.

Adcom or Adcomm: Admissions Committee, the group of individuals at each law school who reviews your application and determines your admissions fate.

Addendum: A supplemental essay written by law school applicants to address an issue that isn’t easily addressed elsewhere. Examples of addendum topics include: a low LSAT score, a low GPA or a bad semester of grades, criminal issues or multiple arrests, and diversity statements.

Bar: The Bar Exam, the test after law school required to become a practicing lawyer.

Biglaw: These are the larger firms in the legal field, often thought of as having more than 100 attorneys on staff. Firms of this size often pay high starting salaries and are thus considered desirable places to work. Positions in these firms are often difficult to obtain and carry significant work expectations.

CAS: Credential Assembly Service. Run by LSAC, this is a clearinghouse for all your application information, including LSAT scores, transcripts, and recommendations. All ABA-approved law schools require the use of CAS.

CCN: Columbia, Chicago, and NYU, the three law schools ranked #4, #5, and #6 according to the US News rankings.

Dillard: The name of the topline, full-ride scholarship at University of Virginia Law School.

Ding/Dong: Common terms for a rejection from a law school.

E-Wave: Evil Wave. A wave of decisions released by a law school that consists of either waitlists or rejections. Example: “Did you see that Michigan e-wave? They waitlisted 500 people in one day!”  See also: Wave.

EA/ED: Early Action (EA) and Early Decision (ED). These are admissions options at various law schools that typically involve applying early, but they also result in knowing your application status early in the process. Early Action provides a result by a set date; Early Decision does as well, but usually requires a binding commitment from you to attend the law school should you be accepted.

ECs: Extracurriculars. These are the non-academic activities and hobbies that you engage in.

Experimental: The Experimental section is an unscored section that appears on the LSAT. You do not know, prior to the test, which section is experimental.

GPA: Grade Point Average, the average of all your grades achieved in college. Most schools focus on your undergraduate GPA (UGPA) and place minimal emphasis on other grades, including those from graduate school.

Gray Day or Grey Day: This is the day that LSAT scores are released from each test administration. The “gray” refers to the test link icons in your LSAC account. In the LSAT Status section, under LSAT Documents, there are links to various parts of the test (Item Response Report, IRR Additional Information, Answer Sheet, Writing Sample, Conversion Table, and Disclosure Book) that allow you to download PDFs of the exam once it is released. These icon links are normally green, but in the minutes before the score release, these icons turn gray. Thus, when that occurs, you know that scores are coming soon, hence the moniker “gray day.” On Twitter, this is often shortened to #grayday or #greyday.

HTE: Hold Tight Email. An email letting you no that no decision is immediately forthcoming, and to please continue waiting patiently.

HYS: Harvard, Yale, and Stanford, the top three law schools according to the US News rankings.

JD: Juris Doctorate degree, the degree you receive upon graduating from law school.

K-JD: A person who goes from high school to college to law school with no breaks or time off (other than regular summers).

LLM: Master of Laws degree. This is a specialized graduate law degree for students either with a JD or holding an international law certification. The program typically lasts one year and focuses on an area of specialization, such as tax law.

LOCI: Letter of Continuing Interest. This letter is typically sent by a student when placed on the waitlist. It serves as a confirmation to the school of the student’s intent to enroll in the school if accepted.

LOR: Letter of Recommendation. These are the letters that professors, work colleagues, and friends write in support of your law school candidacy.

LSAC: Law School Admission Council. This company oversees the administration of the LSAT and operates CAS.

LSAT-Flex: The version of the LSAT used between May 2020 and June 2021. The exam was taken at-home online, and featured a total of three sections, each of which was scored: LG, LR, and RC.

Median GPA/LSAT: The midpoint of the distribution for a school’s admitted students. Median GPA and LSAT numbers give applicants a quick sense of where they stand in relation to the types of students a school has accepted recently.

PT: PrepTest, which is an actual LSAT that LSAC has released. These are official tests that were released after they were administered. They give you an excellent insight into how you would perform on a real test. PTing also can refer to “practice testing,” which is the process of taking a PrepTest under timed test conditions.

Rolling Admissions: Most law school use this process for admissions, which means they consider applicants in batches as the come in (as opposed to waiting until the admissions deadline has passed and then considering all applicants at the same time). Thus, when the admissions window opens there are the greatest number of seats available and the fewest applicants, and as the process goes on there are fewer available seats but more applicants vying for those seats. Consequently, when applying to law school you gain an advantage by applying as early in the process as possible.

Rubinstein/Ruby: The name of the full ride scholarship at University of Chicago Law School.

Softs: You can divide the elements in your application into two components. Hard Factors include your GPA and LSAT score. Soft Factors include everything else (extracurriculars, your personal statement, your recommendations, etc).

Tiers: These are classifications based on dividing the schools in the US News rankings into four groups of roughly 50 schools each, also known as T1, T2, T3, and T4. Tier 1 schools are the top schools (1-50) and include schools such as Harvard and Yale. Tier 2 contains schools 51-100, and so on.

TTT: This charming acronym means Third-Tier Toilet, a reference to low-ranked law schools. While specifically directed at the third tier of the US New rankings, over time it has come to be used in many different ways, and for many different schools (including those both above and below the third tier). Often used as a casual insult on various law school discussion forums, as in, “Why would you want to go to UNC? That place is a TTT.” TTTT is also sometimes used, to refer to the fourth tier schools specifically.

URM: Under-Represented Minority. URM status in admissions refers to a group of students whose racial or ethnic population in law school is less than that of the general population. Groups typically considered URMS include African-Americans, Mexican-Americans, Latinos/Hispanics, and Native Americans.

USNews/USNWR: A reference to US New and World Report, which publishes the most widely used law school rankings. See also: T14.

Wave: This is what occurs when law schools release a batch of decisions. Suddenly, many applicants to the school will find out their status, and the long wait will be over. Often seen on message boards in connection with the “༼ つ ◕_◕ ༽つ give wave” phrase with a certain ranking tier or school named, as in “༼ つ ◕_◕ ༽つ give wave T14”.

Why X: A short law school application essay explaining why a candidate wants to attend a specific school.

WL: Wait List. A sort of admissions purgatory where an applicant is neither rejected nor accepted but remains a possible admit. Law schools typically rely heavily on their Wait List.

Yield Protection (YP): Occurs when a school will decline or waitlist a highly-qualified student because they expect that said applicant will not attend the school even if accepted. This makes their admit and matriculation numbers look better while not actually costing them a student who would attend.