You are here: Home / LSAT Prep / The LSAT Bibles: Do You Need the Newest Editions? Part I 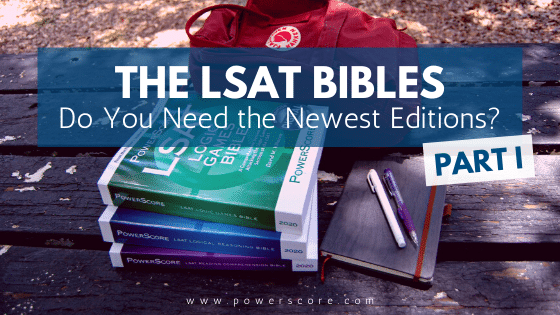 It’s a common question! Students always ask us, “I have an older version of the LSAT Bibles, do I need to buy the current edition?” The easiest answer for us to give is “Yes, you do!” But, we’re cognizant that these books are expensive. So, the answer isn’t quite as simple. In order to give you the information to help you make your own decision, let me first give you an overview of how the update process works. In part II, I talk more about each individual book.

When we first started publishing the LSAT Bibles, the original covers didn’t have medallions or other indications of the year. Even when significant revisions were made, we simply noted it on the copyright page in relatively small print. This system was okay! At least for a little while. So why did we start signifying the edition on the covers in 2013? There are several reasons, but the most important one is so that we could eliminate confusion among buyers.

For example, the very first edition of the LSAT Logic Games Bible came out in 2001 and was 232 pages long. Of course, as we worked through each print run, I would make changes, updates, and revisions as needed. The print runs were relatively small at the start. Some of these were minor, such as improving an explanation. Others were more substantial, such as introducing new concepts or questions. When I made a really significant update, such as adding almost 200 pages to the LGB in 2008, we’d launch it as a “new edition” in our advertising, but the cover stayed basically the same. The problem was, book buyers weren’t really watching the edition numbers. This was especially true in the resale market on sites like eBay and Craigslist. People were selling LSAT Bibles that were 6 or 7 years old and hundreds of pages shorter. Buyers thought they were getting the current book. You can see the problem here.

On our LSAT Forum, we had students asking questions from books without realizing they had an edition that was, effectively, ancient. It was depressing for me to have to tell them that I had added hundreds of pages of material to the book. Often, these pages included improvements to the very explanations they were asking about.  Students were none too happy about it, too. They hadn’t realized they were buying an old book! It was clear that our lack of identification of the current edition on the book covers was making things more difficult for everyone. It hurt some students, too. It’s not that things in the older editions were incorrect, it’s that so much had been added and there was so much new material.

As an example, check out this question from our LSAT Forum. They ask about the differences between the 2008 and 2013 versions of our book. In my answer, I have to break the news to them that the old edition they purchased is out of date and that the newer editions now contain the answer to the exact question they are asking about. Side note, I very carefully track the questions people ask about the books and with each reprint, I add information that helps address the questions. In this way, the books evolve to make sure the most commonly-asked questions are continually addressed. It really helps students using newer books since they don’t have to stop and wonder about certain questions.

By adding the cover medallions in 2013, the problem was eliminated. Thankfully, the really old versions have, more or less, gone out of circulation. However, in its place arose a new problem. Namely, students who purchase an edition and a year or two later wonder if they need to buy the newer editions. We try to be as specific as possible, and while we generally prefer students use the newest editions, we’re aware that the books are expensive. We don’t want to just make a blanket recommendation when an edition from a year or two ago might work just fine.

How We Update the Books

With that in mind, let’s talk about the updating process and how that affects each book. Now, every year, we release a new edition. With each edition, we make changes. The year medallions aren’t just a marketing ploy. I use the yearly reprinting as an opportunity to add more info to the book. I also make sure to include anything new that LSAC might have changed about the LSAT over the last year. In other words, new editions are simply more current than older editions. While those many small changes do add up, it depends on the book and the year as to whether it’s enough to justify buying a new edition.

However, in other cases, I make major alterations to the book and its contents. Sometimes I add whole new sections or drop sections. In some editions, I even change the methods I advocate within. I do this to keep the books in tune with the modern LSAT and the changes made by LSAT. The test is not static; I think of it as more of a living thing. It has subtle changes and emphases over time. So, while in some instances it’s fine to use last year’s edition, in other cases it’s not. Ready to dive deeper? Go to Part II to look at each book individually and see summaries for some of the changes over the years.