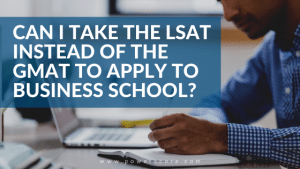 Using a GRE score for application to MBA programs (in place of a GMAT score) has become standard practice in recent years as ETS (the makers of the GRE) has aggressively marketed the GRE as a substitute for the GMAT. That's great for GRE takers, but is there a way to use an LSAT score to get into business school, and thus skip taking the GMAT entirely? It turns out that there is--but, there is also a condition in place on using that LSAT score, so let's talk a bit more about the process. LSAT vs GMAT Because the LSAT and GMAT are very different exams, and typically used for very different … END_OF_DOCUMENT_TOKEN_TO_BE_REPLACED

For many years, the LSAT was used only in the United States and Canada. Then, several years ago, LSAC struck a deal with Melbourne University in Australia to have the LSAT used for admission to the JD program. Over the past several months, we've discussed several other schools and countries that have also adopted the LSAT in some form, including schools in India, China, and Puerto Rico. But, why is LSAC doing this? The answer is market expansion and financial stability.To better understand what is occurring, it is useful to examine some of the testing wars that have been occurring in … END_OF_DOCUMENT_TOKEN_TO_BE_REPLACED

Those of you who follow the PowerScore blog know that I most frequently write about the LSAT and law school related topics. However, PowerScore also offers GMAT books, GMAT courses, and GMAT tutoring, and so I spend time in the GMAT world as well. If you've ever studied the GMAT, you know that both the Critical Reasoning (CR) and Reading Comprehension (RC) sections of that test are very similar to the LSAT Logical Reasoning (LR) and Reading Comprehension sections. But whereas the makers of the LSAT have released thousands of questions that can be used for studying, the makers of the GMAT have … END_OF_DOCUMENT_TOKEN_TO_BE_REPLACED