You are here: Home / Law School Admissions / Should You Cancel a Potentially Lower LSAT Score? 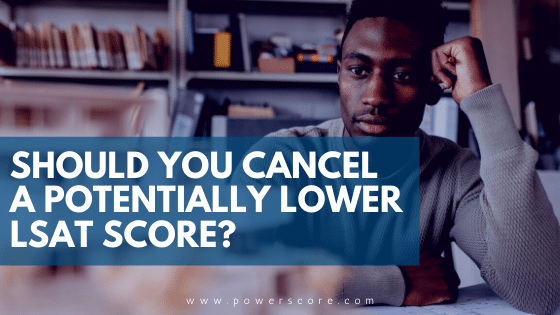 There’s a common situation that pops up for test-takers after taking their second or third LSAT. After the exam, feelings of doubt creep in. “Should I cancel my score? It might be lower than a previous attempt! That would look bad on my application! What should I do?” It’s a question that pops up a lot on our LSAT Forum and it’s definitely worth addressing. Both Dave Killoran and Jon Denning have weighed in the debate countless times, so here’s a compilation of some of the best advice we can give you.

It all comes down to your performance on this most recent test. How do you think you did? Can you identify, with the help of fellow test-takers, which section was experimental? What insight can you pull from your practice tests? Use all these questions to help determine the likelihood of you performed well on this LSAT.  If you think this score is close to or higher than your last score, keep it. If you think it’s significantly lower, don’t keep it.

How to Determine Keep vs. Cancel

Although schools no longer average LSAT scores, a drop could look bad. In general, however, canceling your score will not look “suspicious”. Adcoms don’t really care about a single cancellation, even if it’s after a recorded LSAT score. Why? They don’t actually know why you canceled. There are so many factors that could fuel a cancellation! You might have gotten sick, the room could’ve been loud, you had an emergency mid-test. Admissions Committees don’t automatically assume you canceled because of a bad performance. Now, if you cancel 3 times in a row, yeah. That’s going to look off to anyone that sees that. What reasons are causing you to cancel multiple times in a row?

You may already know the answer to this and are already signed up for the next LSAT. If not, look at your application timeline and ask yourself if retaking is feasible. Would retaking the LSAT interfere with your timeline? You need to find out the last LSAT the school(s) you’re applying to will take. Some top tier schools won’t even consider LSATs taken in the earlier parts of a new year because of how competitive they are. If they already have a score for you, consider letting them know to expect another score. Another thing to consider with retaking the test is the consequences of a retake. Specifically, the limitations. As of the summer of 2019, you may only take the LSAT three times per testing cycle. This is in addition to a limit of 5 attempts every 5 years and a lifetime limit of 7 attempts. Making sure you adhere to these rules can be somewhat of a chore. It could be well worth it, certainly. But, your mentality and a realistic assessment of the likelihood of continued work are also important.