You are here: Home / Studying / My LSAT Regimen with Marvin Dike, Part V: A Reflection 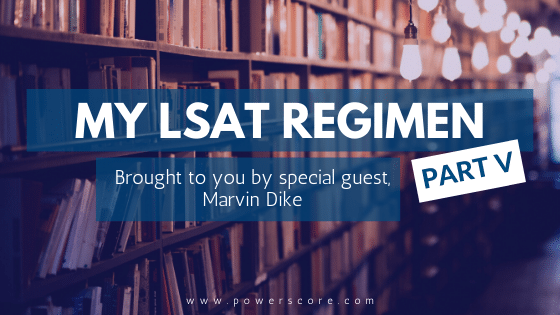 PowerScore student Marvin Dike blogs about his comprehensive study regimen so that our readers can learn from his experience. Make sure you read Part I, Part II, Part III, and Part IV.

So my LSAT journey is over. Finally. I want to give you a rundown of my test day experience and my mentality. I’ll also include a handful of things I learned, a few tips, and some things I would’ve done differently if I could start the whole process over knowing what I know now.

I was never nervous going into the exam. I was excited and looking forward to the challenge. In my soul, I knew I went about this prep the right way. I was patient, disciplined, and organized. There wasn’t much the test-makers could throw at me that was new or something I couldn’t wiggle my way out of. I trusted my process. You don’t earn your score on this single day. You earn it in the months you took to prepare for it. It comes from the hours, days, weeks, and months of perfecting your craft, developing strategies, and getting to the heart of the exam. This test is simply another PrepTest. It’s not any different than the dozens of tests you took before it.

On test day, I woke up at the same time I did every other practice test day. I ate the same breakfast, wore the same outfit, listened to the same music. I stuck to my routine that I had already perfected. While I can’t go into too much detail about the test itself, my section breakdown was LG, LR, LG, break, RC, LR.

That was the most favorable breakdown I could ask for. I was ecstatic when I came across the next LG section. I not only got my best section twice, but they came early in the test. Both LG sections were very straightforward and standard. Nothing out of the ordinary. Nothing I had not seen literally dozens of times. In fact, during the break, I couldn’t help but laugh at how I spent 8 months doing 10 games a day. Drilling and logging, just for my actual LSAT LG section to be jokingly easy. Well, easy for me because I had embedded all the games in my mind. LSAT writers trade on the same thing, the same inferences and skills. The LSAT is like a boxer with only so many combinations to throw.

In retrospect, it’s comical how much work I put in relative to the game section difficulty I actually got. My LG method was probably overkill, but it allowed me to have the utmost confidence. Before the test and during, I kept reminding myself to stick to the plan. Don’t be a hero. My plan was something I practiced, evaluated, and found a happy medium with. That’s the plan I formulated over time and that I partially outlined in my last several articles—a strategy for how to attack each section in regards to pace and approach.

Handful of little tidbits I think are worth sharing.

If I could start over from scratch, I would change my diligence in logging my RC scores during my drilling stage. As you know, I did all the LSATs from PT 1-35 as drills. I logged all the LR and LG questions I missed. What I did not do, is log my RC passages for PT 1-35. Logging my scores would have been helpful because when I ran out of drilling material and only had untouched PTs remaining, I started over with RC passages starting with PT1. Unfortunately, I had no information showing whether or not I was improving because I didn’t save my scores the first go-round. I don’t think it hurt me much overall, but it’s something I could have been more cognizant of.

Other than that, I’m really happy with the whole process.

You never really have an idea of how you did on an LSAT. You can certainly try to have an idea using PTs, but you’ll never 100% know. One day you’ll feel like you got every question right and the next you’re wondering if you accidentally skipped a question or misread all the question stems. I’m fairly confident I did well, but I won’t know until I get my score back. You won’t find me biting my fingernails off until scores drop, they will come out when they come out. A huge weight is off my chest, though. It feels weird to look at my desk at home and not see a stack of logic games ready for me. It’s weird not having to go over tests and questions drilling. That’s been my life for the last 10 months. But it’s so fulfilling to be at the end. Especially knowing I prepared as best I could, I sleep well knowing I maxed out every resource available.

During the test, when everything was going well, I felt so blessed. Blessed that I had found something I’m passionate about and pursuing. Blessed for the motivation and discipline to work as hard as I did. I’m grateful for being able to learn so much about myself during this process and to have the support group I had. I felt fortunate to have the opportunity to build the relationship I did with Dave Killoran, who wrote the PowerScore Bibles and LSAT Courses. I was just one step closer to fulfilling my dream. There was a time in the past that I didn’t know where my life was going. It’s surreal to look back on that point and compare it.

One factor that kept me motivated was the idea that going to law school and getting my JD was bigger than me. I have younger cousins that look up to me. My family has sacrificed so much throughout my life and supported me. I owe it to myself to give this my all because I didn’t in undergrad. I owe it to the young boys I mentor at the Boys and Girls Club who don’t have anyone else to emulate or confide in. All of that keeps me going. I’m okay with the pressure of these expectations. Growing up, I was the kid who wanted the ball in his hands when the game was on the line, I wanted to be batting in the last inning when it was sink or swim. Pressure bursts pipes, but pressure also makes diamonds. I prefer to operate with the latter mindset.

My next step is perfecting my essay and application. It’s no small feat. I have to have this same mentality when I begin law school, too. I need to stay relentless and believe in myself, but also be willing to help others.

Thanks for reading, study hard, and I’ll see you in court =)

What's the flaw in the reasoning in the Mayor's st