You are here: Home / Logic Games / How and When to Create Templates in Logic Games 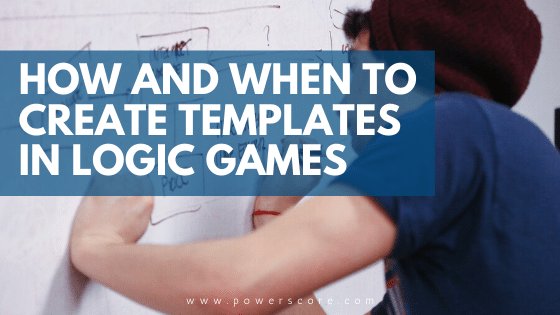 As people continue to prep for the LSAT, Logic Games weigh heavily on the mind. And a principal concern among most test takers is this: how can you tell when to draw out templates in your setup?

More specifically, I was asked this question, “How can I quickly and easily identify when I should and should not template? I know that if I have a variable or variable set that can only go in one of two places, that can be a great hint, but it seems like that’s not the only determining factor. I would greatly appreciate some advice!”

What follows is my take. The idea of creating templates or showing limited solution sets for games is a really interesting topic, and I always enjoy the conversation! We also discuss it in this post, but it’s such a common question that I feel like it’s worth exploring further.

I should point out that no blog post or informal description could do justice to this topic the way that our classes do, as there’s an entire lesson that focuses exclusively on templates/limited sets in the games discussion. So if there’s some confusion presently about when and how to use them then a class is by far the best way to resolve it. But hopefully this will give readers a glimpse of the process.

Second, a variety of perspectives certainly exist, so hearing from others can often be a valuable resource! Take this as merely my opinion on the matter. (Although I can attest that others with PowerScore would express similar thoughts)

Third, I’d caution anyone to avoid too many absolutes when it comes to their LSAT approach…the test makers are just too good at creating exceptions for a whole host of strategies employing “always do X” or “never do Y” to be entirely reliable. People looking for universal formulas often find themselves struggling with the adaptability and logical dexterity this test demands.

With templates, then, I don’t know that I’d ever go so far as to say there’s always a time or scenario when you’ll use them–“If you see a certain construction you ‘must’ [or even ‘should’] employ templates!” is just stronger than I’m comfortable with for a test like this. Similarly, suggesting that more than X number of template diagrams makes it not worth it is probably true if that X is clearly going to be quite large (like a dozen+, say, or more than 7-8 extremely involved diagrams…), but I’d happily sketch out 8-10 quick sequences if that represents every possible order in a game and I can recognize that’s going to be the case. The point: careful with absolutes as a general rule, but particularly when it comes to this topic!

Instead, let’s talk about what tends to allow and disallow templates, or at least creates high likelihoods of use or avoidance.

Before I ever begin to attempt the use of templates, or showing the various hypotheticals that could occur given the scenario and rules of a game, I look for two criteria to be satisfied:

1. There needs to be some fundamental dividing line(s) in the game that would send the possibilities (whether general templates or specific solutions) down a limited number of paths. So a block that has only a handful of placement options, or a numerical distribution that can only occur in a few ways, or split options for certain variables or spaces, or a select few groupings that must be selected…each of these, and many others, serve to channel the game in a powerfully restricted type of way. Recognizing the existence of this limiting factor is step 1, and interestingly enough the majority of games you’ll see tend to have at least one element that’s potentially limiting in this way! But it’s not enough…

2. You also need to realize what’s going to happen as you begin exploring (listing out) each/all of those pathways. And what needs to happen is that, as you journey along each potential path, further restrictions and inferences MUST come into play!

Let’s say I have a grouping game where of the six people selected. Exactly 2 out of A, B, and C must always be selected. Based on this we’ve satisfied our first criteria. There are now just three main options for this game, namely AB, AC, and BC as your 2-out-of-3 groups. Each of those three combinations represents a possible template, but that alone may not be sufficient to warrant templates. The template decision depends on what happens as you consider each: does the group AB significantly affect the other variables/spaces based on the rules, or does your “journey” end at AB? If the initial points of restriction (the three groups here) are not influential, templates may not be worth your time; however if they are highly connected to the remaining variables and begin to fill the four open spots, templates are much more likely to pay off.

Templates Are An Investment

Which is fine and good, but here’s the truth: I think most people have a fairly consistent standard by which “now’s the time for templates!” becomes an obvious plan of attack (the two criteria above, with practice, aren’t hard to measure). What gets particularly intriguing is where different people opt out. That is, where people make the decision that templates, even if possible, are NOT worth it.

Anyone considering this approach should keep in mind that templates are an investment. How, or whether, that investment will pay off is often a very subjective decision. 7-8 minutes setting up templates might be well worth it! Or it might be disastrous, it all depends on the power of the templates and your facility with them. Showing 8 different templates might only take a few minutes, or it might be the only way you happen to be able to get through the game and succeed in the questions…either of which likely makes templates the right call. Conversely, 8 templates might take so long and provide such a poor return on that investment that it ruins your whole section!

So you have to be self-aware at every moment! Make informed decisions about how you’re going to potentially attempt to show templates, how much time that’s likely to take, and how beneficial they are likely to be once created. A lot of moving parts, and moving differently for pretty much everyone.

I know that’s not a “hard and fast” type formula, but that’s only because there really isn’t one. It varies by student, game, and even the section as a whole. For instance, last game with 4 minutes left, or last game with 14? Still, it’s a good guide to consider as you continue to practice, and I hope you found it helpful.

Struggling with templates, or games in general? Let us know below with additional thoughts or questions!