You are here: Home / Logic Games / How to Recognize Limited Solution Set Games 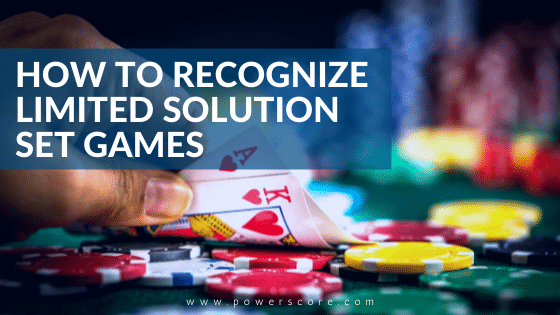 A struggle among LSAT test-takers is knowing when to diagram, as part of your initial setup, the limited solution sets possible in a logic game with a highly restrictive rule set. If this is something you also struggle with, let’s go over it.

Learn When to Invest Time

Diagramming the limited solutions at the start of a game can empower you. It enables you to dominate the game with extra speed and accuracy. But only if the possible solutions are, in fact, atypically limited. Knowing when to invest the time to use this technique is the first step to help increase your score.

The LSAT Logic Games section tests our ability to deduce connections between and among rules. In some games, the rules are so restrictive that only a limited number of solutions remain available. Another way of saying this is that from all of the possible ways in which the variables (without restrictions) could have interacted, there are only a few paths remaining.

Think of a Tree

The image of a tree may help you visualize this process. Think of this tree, with all of its branches, as a logic game. If you don’t restrict how a tree’s branches emerge, we wind up with many different paths from the trunk outward. However, when you start restricting the branches, we cut off some of those possibilities. You may wind up with only one limb coming off the trunk, perhaps with only 2-3 branches from each.

To recognize when a game has only a limited solutions, look for a combination of rules that work together to funnel the possible solutions into just a few paths. You will want more than a single rule, even a powerfully restrictive one, to be confident enough to commit to diagramming out the options.

For example, look for rules that establish a Numerical Distribution. Pay extra attention to games with no random variables. Remember that real estate is scarce in the games.

Rules that form a large block of variables will create reduced spacing options and can even create a duality for a variable or a space. For example, a large block in a linear setup game could so reduce the spacing options that the block’s first variable must appear in either first or second position. This is an example of a Power Block.

Similar scenarios are available in grouping games as well. For example, in a two-group game, if the rules tell you that two variables cannot be in the same group, then reserve a space in both groups so that you can visualize the effect of that restriction. Doing so will reduce the spacing options and might clue you in to the possibility of limited solutions. This process of using uncertainty to generate inferences is an example of our Hurdling the Uncertainty technique.

These are just a few examples. The unifying theme? Identifying a powerful combination of rules that permits deductive inferences relating to limited space, duality, and numerical limitations. If, while applying the rules, you are in one or more either/or situations regarding spaces/variables, take a moment to pause. Consider whether the effect of the rules is localized or if the rules combine to permit broader inferences.To be safe, start with your basic template. Only begin diagramming additional possibilities when you can see there are just two or three paths the game can take.

While diagramming limited solutions is a time-intensive task, when done properly the return on this investment in time is increased speed and accuracy. If you start down the templating path and discover there are more possibilities than you originally thought, don’t panic and don’t beat yourself up. Keep your head, take the information you’ve learned about the game, and move on to the questions, bearing in mind that the options you’ve diagrammed are not the only ones.

With practice, you can learn to not only identify limited solution opportunities but also to diagram the possibilities efficiently and to use your diagrams effectively. In combination, these three skills can earn you a powerful competitive advantage over the competition.