You are here: Home / Logical Reasoning / Ignoring a Possibility vs. Making an Assumption: What’s the Difference? 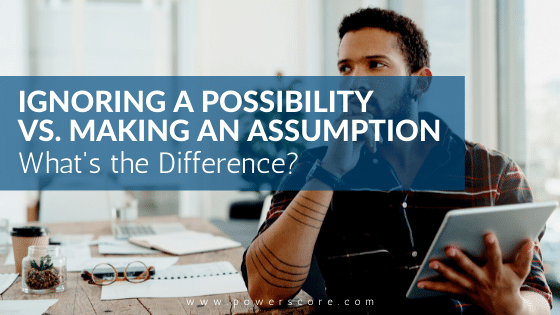 If you’re taking the LSAT, you’ll encounter Flaw questions in the Logical Reasoning section. Students commonly struggle with determining how the author talks about a stimulus. Specifically, when reading and analyzing a stimulus, how do you determine whether the author has ignored a possibility or has made an assumption? What clues within the stimulus and/or what reading strategies help differentiate these two author approaches in argumentation?

This is a great question! I’ll start by explaining exactly what those phrases mean (as used by the test makers), and then I’ll tell you how they tend to operate in stimuli.

“Ignored a Possibility” vs. “Takes for Granted”

The former group means that there’s some idea or piece of information that is missing from the argument, or that wasn’t factored into it, that could have potentially changed the author’s conclusion. So it’s literally about absence. Idea X isn’t in the argument (it was overlooked). But had the author considered it they wouldn’t feel so confident about their belief.

The latter phrases, about taking something for granted or presuming it to be true, are the exact opposite. The author has included some idea in the argument, either explicitly in the text or clearly implied by what the text says, that there isn’t sufficient reason to simply accept at face value the way the author has. So it’s referencing the presence of something in the argument itself that’s questionable or not entirely supported.

Both situations are problematic for the validity of the argument, but in very different ways!

The “Test” in Flaw Answer Choices

The most common place to find these two ideas is in Flaw answer choices, as I’m sure you’ve seen. The test makers love these descriptors for Flaw stimuli, in large part because they know most students don’t fully understand what they mean. They tend to be more abstract than the categorical flaw answers like Mistaken Reversal, Source, Circular, and the like. People tend to have all of those memorized so it becomes formulaic. But with the language discussed here, it’s less about common types and much more about the particular scenario in that question’s stimulus, and that’s harder.

The “test” for each in Flaw answers (and anywhere else you might suspect these issues are occurring) is also unique:

For “fails to consider” type answers:

The first thing to check is whether the idea is truly missing from the stimulus. If you can find it in the stimulus, then the author hasn’t failed to consider it (or overlooked it), and that description of the argument wouldn’t be true. Assuming it is something that the stimulus overlooks, the next thing to check is relevance. For example, if it was pointed out to the author, what effect would that have on the argument? If it was negative effect, then it was clearly a mistake not to consider it and you’ve got the flaw. If there’s no effect then overlooking it wasn’t a problem and that’s not a flaw.

Sidenote: one reason the test makers love this answer so much is that it’s fairly easy to make it seem true, since every argument in the world overlooks millions of things (nearly all trivial or irrelevant, but still overlooked). The real concern is whether any of those missing pieces matter—whether they’d change the reasoning in some demonstrable way—since only then would their absence be problematic.

For “takes for granted” answers:

Obviously, the first thing to check is whether the idea in question is in fact included in the stimulus, either explicitly/verbatim or at least clearly implied as a belief the author holds. If not, then it isn’t something the author has taken for granted or assumed to be true, and thus it isn’t an accurate assessment of the argument. Otherwise, the next step is to consider whether sufficient reason has been given by the author to believe that thing. If so—if it’s well supported and logical—then there’s no issue. But if not—if it feels untethered or seemingly random/unsubstantiated—then the author may be incorrect in including it in the argument and you have your flaw.

Finally, let me outline a few example cases, or at least common scenarios, where you tend to encounter these potential errors…basically some clues/warning signs to be on the lookout for so you can spot these more effectively as they’re happening:

“Overlooks the possibility” is very often about multiple interpretations of some set of evidence or data. One of the more common forms of reasoning where that tends to occur is with causality. Some observation is made and believed to be the effect of some cause that the author goes on to argue in favor of. That’s a favorite of the test makers and you see it all the time.

The potential problem with that construct is whether some other cause could have led to that observed effect instead, in which case the author is in trouble. So if there are two possible causes and the author has settled on one, you could say that the author “failed to consider that Cause #2 may have led to the Effect” [insert questions details, of course]. Causality isn’t the only place you see this crop up, but I think it provides a nice illustration of the missing-piece issue that can then be scrutinized anywhere else if you feel the author should have considered idea X before settling on the stated conclusion.

With “takes for granted,” you can frequently catch these mistakes in the form of some logical leap in the argument, or brand new piece of information introduced, where the author clearly feels two things are connected but never makes the connection explicit.

One of my favorite places where this happens? Supporter Assumption questions! In those, you generally see a conclusion suddenly introduce some new term or concept that isn’t mentioned elsewhere in the premises. So while it’s clear the author thinks the new idea is linked to the supporting information, the link itself is never provided. The author has “presumed without justification” that it exists. Again, this is a common enough occurrence that you can find it all over the place in LR, not just Supporter Assumptions. But Supporters illustrate it nicely and will give you a better sense of how these reasoning gaps manifest and what should then catch your eye when they inevitably appear in other arguments.

Both of these forms—the unfortunate absence and the unsubstantiated inclusion—are fundamental to fully comprehending argument structure and validity.