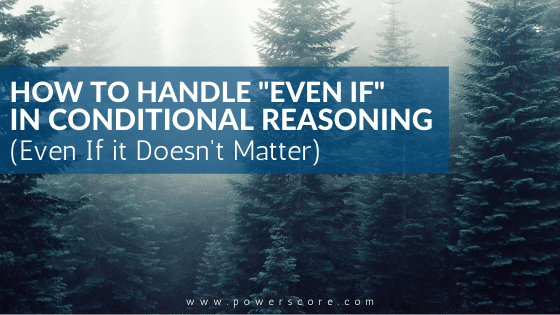 Most students confront conditional reasoning very early on in their LSAT preparation. They spend hours mastering the logic of conditional rules in Logical Reasoning stimuli and answer choices, and in Logic Games as well. To this end, students must memorize a number of common conditional reasoning keywords and phrases that help indicate the presence of this logic.

Some of these indicators become incredibly obvious with practice. Many of us can recall a moment when, while working through a previously unseen logical reasoning question, we encounter the all-too-familiar “if….then” construction. With a gleam in our eye and a smile across our face, we confidently say to ourselves, “I’ve got this,” and quickly draw out a perfect diagram of the rule.

The “Even If” Construction

But every so often there comes a moment when we see that familiar “if”, and, just as our hearts start to warm with recognition, a specter looms on the horizon—standing menacingly in front our old friend “if” . . . the word “even”. “Even if”. Wait . . . what?

Let’s begin with a very basic rule. For purposes of this discussion, and similar to most rules you see on the LSAT, let’s just assume the truth of this rule:

If you obtain a driver’s license, then you must be at least 16 years old.

Diagramming the rule is relatively straightforward:

The Idea of Necessity

Now let’s take a look at two other rules in this context, both of which use the “even if” construction:

One can obtain a driver’s license even if they have not yet graduated high school.

Even if you do not own a car, you can still get a driver’s license.

Clearly, there’s something conditional going on here, but what is it?

If we now compare these two “even if” rules to our original rule, we see that while the original rule establishes a necessity, these rules actually do the exact logical opposite. Rather than establish something that is required for obtaining a driver’s license (as the first rule does with the age requirement), these rules show us things that are not required for obtaining a driver’s license. In other words:

Graduating high school is not necessary for obtaining a driver’s license.

Obtaining a driver’s license does not require owning a car.

You can read about logical opposition and conditional reasoning in this blog post. There are some unique additional insight on this idea. It is definitely worth a read.

Take a look at one more unrelated example (one that is also very close to reality):

You can be admitted to Harvard Law School even if you scored below a 170 on your LSAT.

The translation here is similar to before. A 170 is not necessary for admission to Harvard Law School.

Not all “even if” statements you encounter on the LSAT will be this straightforward, however. In fact, the LSAT has shown a propensity for adding these statements to preexisting conditional rules. Take an example from a Logical Reasoning stimulus:

Principle: Even if an art auction house identifies the descriptions in its catalog as opinions, it is guilty of misrepresentation if such a description is a deliberate attempt to mislead bidders.

How does the presence of an “even if” clause affect the logic of what’s being said?

Notice there are two clauses in this sentence. The first clause is our “even if” clause. The second clause, following the comma, is a conditional rule. But how does the presence of this “even if” clause affect the logic of what’s being said?

First of all, let’s focus on the second clause. It reads:

“…it (an art auction house) is guilty of misrepresentation if such a description is a deliberate attempt to mislead bidders.”

This is a fairly standard presentation of a conditional rule. Although the sufficient condition appears after the necessary condition, the use of “if” makes it relatively easy to diagram. It should look something like this:

This rule effectively says that any description made with an intent to mislead is enough to show that an art auction house is guilty of misrepresentation.

So now let’s turn to the remainder of the statement in the first clause. It reads:

Sometimes the presentation is much more difficult than the actual logic that lies beneath it.

How does this “even if” clause affect the conditional rule we outlined above? The answer, oddly enough, is that it doesn’t really affect it at all. This clause is simply stating that the conditional rule above holds true regardless of whether the descriptions are identified as opinions. In other words, the fact that the auction house identifies these descriptions as opinions does not negate the rule in any way. So when we put the entire sentence together, the translation is something to the effect of:

If an art auction house describes with an intent to deceive, then they are guilty of misrepresentation regardless of whether or not they identify the descriptions as opinions.

But even this translation effectively leaves the original conditional rule intact. The situation doesn’t really change from the original rule that says anytime you deliberately try to mislead, you are guilty of misrepresentation. The end result here is a conditional rule that is much longer and more complicated than just saying, “if you intend to deceive, you are guilty of misrepresentation.”

So, as is often the case with the LSAT, the presentation is much more difficult than the actual logic that lies beneath it. In many cases, “even if” boils down to an extraneous clause that doesn’t greatly impact the logic of the rule it is modifying. It simply tells you that what follows does not matter; it’s a specific factor that is either not necessary for another event or essentially irrelevant to whether a particular conditional rule holds true.