You are here: Home / Studying / The Boy and the Rocks: An LSAT Allegory 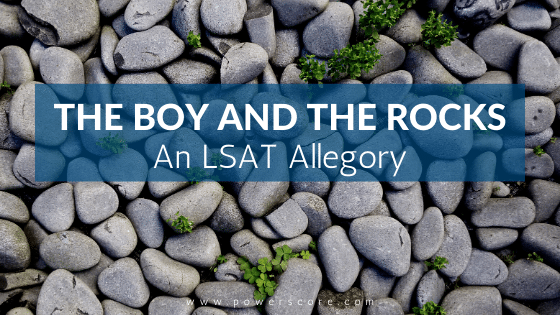 Once there was a young boy who lived in the country. Like with all young boys who live in the country, there were always chores to do. This boy lived on a farm with rocky soil, and one day his father told him to go pick up rocks until their wagon was full. Being nine years old, the boy knew that this impossible task would be the end of him.

First, the boy pulled on his boots, because that’s what you wear when you do chores on the farm. Then he went out to the field. When he got there, the boy stopped dead in his tracks. He had forgotten just how many rocks there were. Big rocks, little rocks, all different shapes and sizes of rocks were on the ground all around him. He knew instantly that he’d been right. This chore would be the end of him.

But this boy was a fighter. He wasn’t about to give up. So, he made a plan. He figured that the best thing to do would be to find the biggest rocks he could, and put those in the wagon. With just a few of those big rocks in, he’d be done, free and clear.

The little boy looked around to find his first big rock. He was in luck. It was right at his feet. He reached down, grabbed the rock in both strong hands, and pulled. Nothing happened. Undeterred, the boy planted his feet, put the look on his face he’d seen the men use to pick up heavy things, and pulled again. Nothing.

The boy realized that the rock was just too heavy. He scouted out another big rock and went over to it. He put the right look back on his face, bent his knees (because his grandfather always said you have to lift with your knees) and gave that rock the mightiest tug the farm had ever seen. Nothing.

Now this boy, he didn’t know the meaning of the word quit. For the next hour, he went from big rock to big rock, tugging and pulling and face-making and bending his knees. But the result was always the same. Nothing.

Finally, the unending setbacks were more than the boy could take. He looked around, just to make sure no one was watching him. Then he collapsed on the ground next to the wagon, whose emptiness only added to his misery, and seriously thought about crying.

It just so happened that the boy’s mother, a very wise woman, had been watching the boy the whole time. She was sad for her son, because he had forgotten the advice she had given him as he put on his boots to head out to the field.

“Pick up the little rocks,” she had said, “and not the big ones. The big rocks are too heavy, and can hurt you if you drop them. The little rocks you can pick up quickly, without danger of hurting yourself and without tiring. Before you know it, the little rocks will fill up the wagon and you’ll be done.”

The boy’s mother went to him, and asked him what was wrong.

“I can’t pick up the big rocks!” he cried. “Now I’ll never finish my chore. I know you said to start with the little rocks, but there are so many of them! Look at all the rocks in the field. I can’t pick them all up.”

“You don’t need to pick up all the rocks,” his mother replied. “Don’t judge how much you’ve done by looking at the field. The field is too big and has too many rocks. Keep your eyes fixed on the wagon. That’s your task. You don’t have to pick up all the rocks in the field. You just have to fill up the wagon. Find the small rocks and put them in. Before you know it, you’ll have reached your goal.”

The boy did as his mother said, and started finding small rocks to pick up. With each rock put in the wagon he became one rock closer to completion. Seeing his efforts add up gave him strength, and he never once got tired. In less than an hour, the wagon was full of small rocks, and he was done. The big rocks were left in the field, and some small rocks too. But his job never was to clear the field of all the rocks, big or small. His job was to fill the wagon.

How to Navigate the LSAT Rocks

Sometimes, when people study for the LSAT, they’re like the boy when he first goes out into the field to pick up rocks. They’re overwhelmed by the task and the size of the field. They have the wrong perspective, thinking that their job is to clear the field of rocks rather than just filling up the wagon. They approach their study by going after only the big rocks, hoping to knock out the chore quickly, rather than make immediate and sustained progress by picking up the small rocks that are all around them.

Your job on the LSAT is not to lift the huge rocks. It’s not to be perfect or finish faster than everyone else. Don’t get overwhelmed by a task that wasn’t even yours to begin with. Your job is to make the best progress you can by identifying and correcting the small holes in your knowledge or deficiencies in your process. Those small errors are things you can fix quickly, marking your progress as you go. As you pile victory on top of victory, small though they may be, you’ll energize yourself and gain confidence. Before you know it, you’ll have filled the wagon and will be that much closer to your goal.