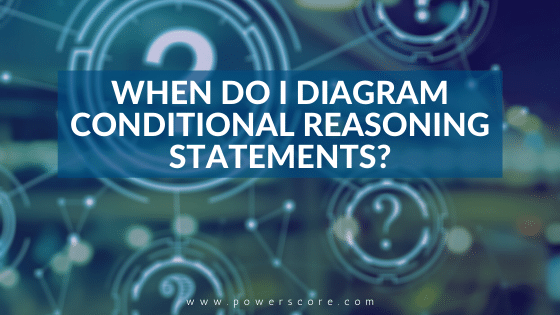 Conditional Reasoning is a Major Concept

While, not surprisingly, I think that every chapter in the LR Bible has high value, the Conditional Reasoning chapter is one that often has a tremendous impact on students. Conditional Reasoning is an extremely powerful form of thinking that is used on every single LSAT in both the Logical Reasoning and Logic Games sections. Most students are not initially well-versed in the specifics of sufficient and necessary conditions, and unless you’ve taken a Logic course at some point in your academic career, there’d be no reason to have studied the formalized version of this thinking.

Most Conditional Statement Should Not Be Diagrammed

But You Need to Know How to Diagram

The Rule for Diagramming

Diagram when you think it will help you better understand what the author is saying.

Diagramming is a tool, and like all tools it only helps when it you apply it in the right situation. If you know what the author says, that is, you see the conditional relationships just fine, then don’t diagram just to diagram. On the other hand, if you find that the conditions are piling on top of each other and you are having trouble following it all, there’s no harm in putting it down on paper (and this is where practice helps because you should be able to do it instantly and effortlessly).

When you are first studying, there’s no harm in diagramming a lot of different conditional statements. It helps you practice, and it helps confirm that what you are thinking actually matches what is in the problem. Typically, with more advanced LSAT takers, you see the amount of diagramming they do decreases over time. This occurs because as they become more familiar with the principles of conditional reasoning, they recognize it faster and process the relationships more easily, making diagrams less necessary.

A corollary question that often comes up in this discussion relates to the fact that conditionality appears in so many questions. If that is the case, how do you know which conditional statements will be critical to solving the question? Which do you diagram? And which ones are just minor statements that will not have a significant impact on the correct answer choice?

In the past, I’ve analogized the process of recognizing useful conditional statements to being an air traffic controller: you have to be aware of conditionality when it appears on the screen, but you only need to directly worry about it when something is about to happen, or will soon (in aviation parlance, a collision, a landing, or a takeoff). Another analogy I used about diagramming conditionality came up recently on our LSAT Discussion Forum (over here, towards the bottom):

The presence of conditionality in LSAT questions is like cars on the road—it is (and they are) everywhere. However, in LSAT questions, sometimes the conditionality is rather passive, and does not play a significant role in the question (more often than not, actually). The same is true with cars in a sense—most are rather benign and present no threat. The cars you need to pay attention to are the ones that present a danger to you (cars very close to you, erratic drivers, etc). When you first begin driving, everything looks dangerous, but over time you begin to be able to recognize which cars are real threats and which probably aren’t. The same is true in working with conditionality in LSAT questions: over time you learn when it will play a role in solving the question and when it will not.

How Do You Know What is Important?

So, how do you learn what’s important and what isn’t? That is where practice comes in, and it is one reason we advocate doing so many LSAT questions during your preparation. But, the point I like to make is that it isn’t just about doing a lot of questions. It’s equally about how you analyze those questions, especially if you are self-studying.

One of the differences between our LSAT books and our LSAT courses is that students in courses get to see hundreds of questions broken down by their teacher, and in the process they form an excellent understanding of when to diagram in LSAT Logical Reasoning, and when not to diagram. When you study on your own, you don’t get to see that same process—instead, you have to create it for yourself to an extent. Very carefully examine each question. Look at the conditionality present—is it key to solving the problem? This is why we offer our Test and Analytics Platform, to help identify when key ideas are in play.

Learning conditional reasoning is a fundamental part of preparing for the LSAT (and law school too), and diagramming conditional reasoning is something you have to be good at to do well on the LSAT. The basic rule is to learn it as well as you can, and then only use it when you need it. That gives you confidence that you have the tools you need to excel, and at the same time allows you to go as fast as possible.

Questions or comments about diagramming in LSAT Logical Reasoning? Please post them below!